REGIONAL— The effects of drought are creeping back into the North Country after frequent rains in late July and August temporarily eased conditions here. The impact is most noticeable along the … 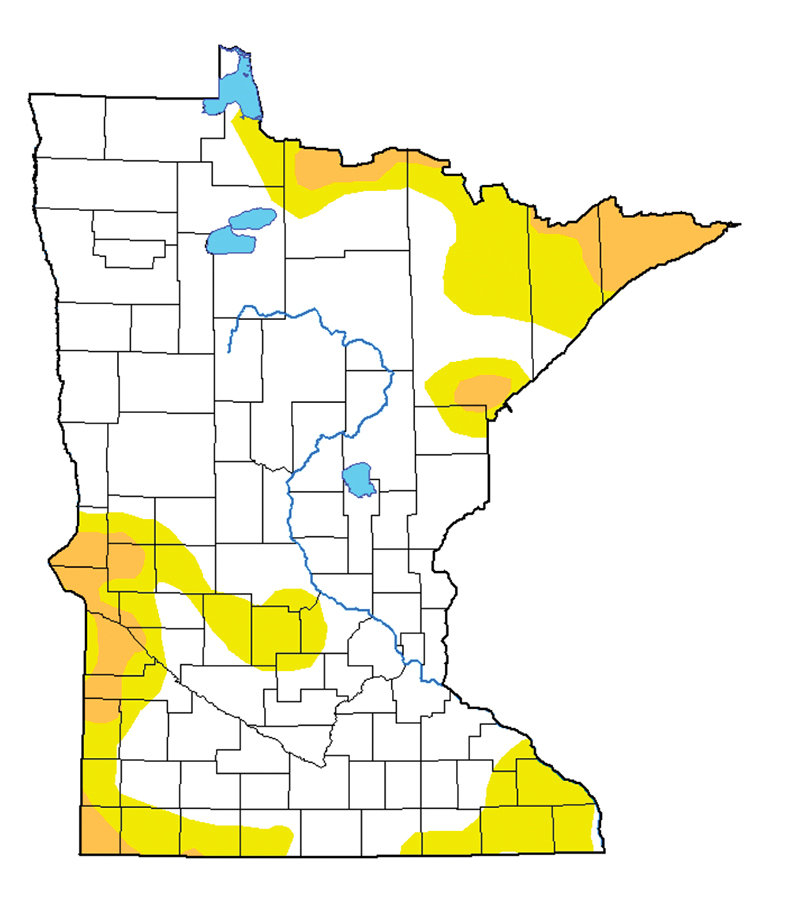 REGIONAL— The effects of drought are creeping back into the North Country after frequent rains in late July and August temporarily eased conditions here. The impact is most noticeable along the border, where moderate drought continues to persist.
According to the U.S. Drought Monitor, northern Koochiching, a small portion of northwestern St. Louis County, much of northern Lake County and all of Cook County remain in moderate drought. Meanwhile, all of northeastern St. Louis County is listed as abnormally dry, the lowest category of drought.
Precipitation has varied dramatically across the region over the past few months. Total precipitation in the area ranges from more than 23 inches so far this year in Celina, west of Cook, to just 15 inches in the Ely area, which is normally wetter than Cook. The Ely area is running 6-8 inches below average for this time of year.
The lack of rainfall near the border is evident by the low water levels in border rivers. The Basswood River is running below what is known as Q90, which means it is currently lower than it would be 90 percent of the time. As of Monday, the river was running at 267 cubic feet per second. Anything below 354 cfs is considered at Q90. The current water levels in the river are the lowest they have been since September of 2011, when drought enabled the Pagami Creek fire to become one of the largest wildfires in modern Minnesota history. Fire danger in the region is currently listed as moderate, according to the Department of Natural Resources.
The Rainy River is also below its Q90, running at 4,410 cfs, or significantly below its Q90 cutoff of 4,960 cfs.
Meanwhile, the Vermilion River is running at 119 cfs, which is right at the river's Q90. Just to the west, the Little Fork River, whose watershed has seen more precipitation, is still within its normal ranges, although its level is on the decline after a late summer bounce as a result of significant rain.
The latest extended forecast calls for above average temperatures and only modest chances of precipitation.