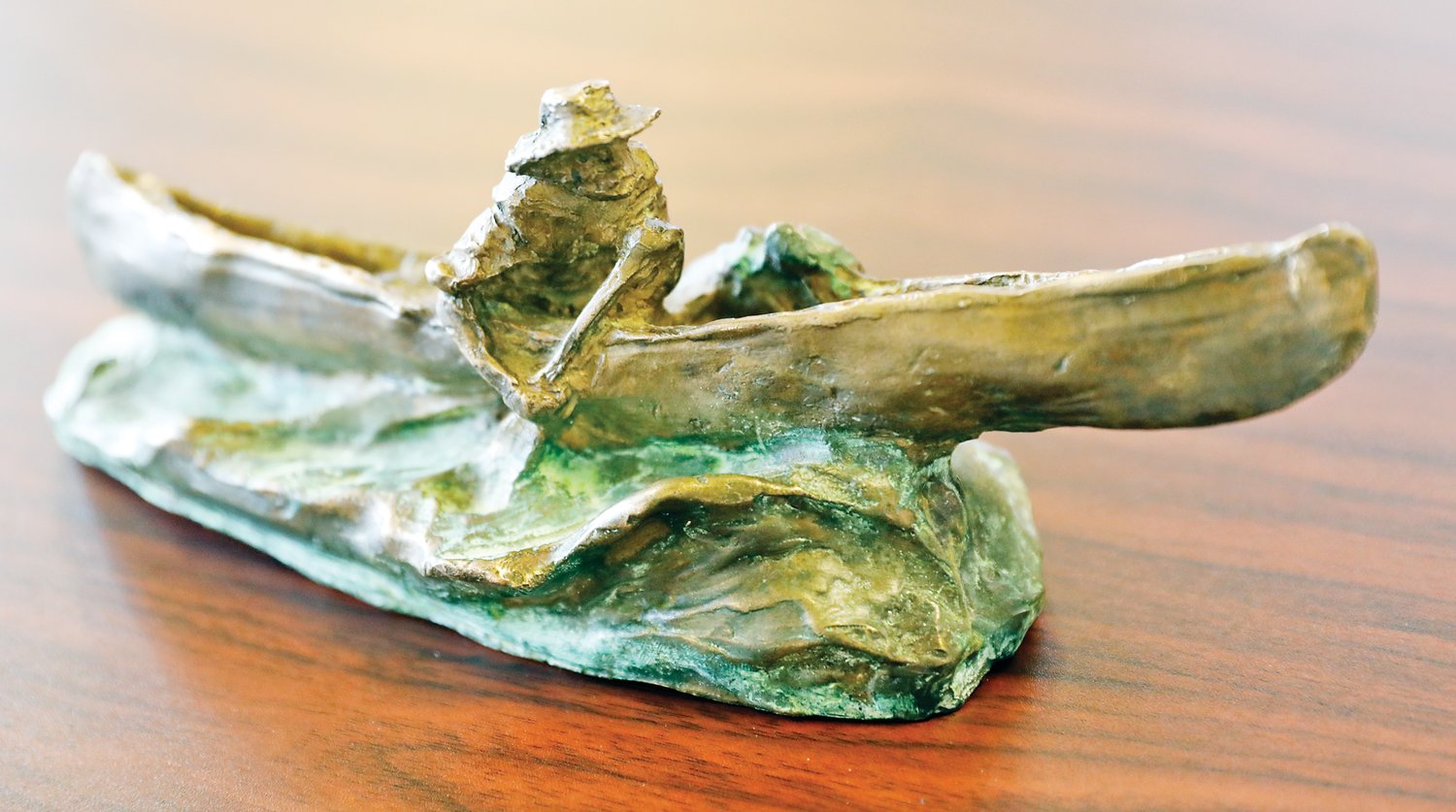 ELY – City council members here expressed concerns at a public hearing this week about the donated bronze canoe sculptures proposed for Whiteside Park, including possible vandalism, safety, location, and the need for two similar pieces of public art.
While no citizens participated in the hearing, held prior to the council’s regular business meeting Tuesday night, council members discussed the issue at length.
Last month, William Rom Jr., son of one of Ely’s storied and largest canoe outfitters, and his wife, Holly, presented to the council their vision of displaying a dedication to the city’s long history of canoeing through a pair of bronze sculptures to be erected next summer in Whiteside Park.
One sculpture, a life-size representation of a pair of Voyageur explorers in a 16-foot birch bark canoe traversing down river rapids, would be displayed in the middle of the park. The other sculpture, to be located near the park’s band shell, would be a one-quarter scale representation of local adventure canoeist Bill Mason.
The council’s Park and Recreation and Projects committees reviewed the plans and support the project. When introduced to the council last month, council member Heidi Omerza said, “I don’t see anybody having a problem with this.”
Mayor Roger Skraba related a couple of comments he heard from at least one individual who expressed concern about the size and location of the art. Skraba also asked about any city ordinances that dictate the display of items in the park.
City Attorney Kelly Klun indicated that she was not aware of anything that prohibits the city from displaying public art in the park.
“The general standard is if the council accepts it, it is okay,” she said. “There is nothing in the original deed from the Whiteside family.”
A stone sculpture, located just north of the band shell, already exists in the park.
Council member Angela Campbell said she was concerned that the size of the sculpture may entice “kids to hang from it, jump on it or play on it.”
Council member Al Forsman suggested a sculpture could be placed in the flower garden in the middle of the park.
“That seems like an obvious place to put a sculpture,” he said.
Omerza, chair of the Parks and Rec committee, said the locations were considered because of nearby access to electric power for lighting and security.
Clerk-Treasurer Harold Langowski said city officials and the Roms toured the park and considered various locations, settling on the proposed areas.
“They were drawn to the center of the park and also a location in line with the stone sculpture,” he said. “We can always adjust the final location.”
The Roms were not present for the public hearing.
Skraba wondered if safety and security were considered in committee-level discussions. “The last thing I want to see is a fence around them,” he said. ”I hope people will respect it.”
The mayor also indicated his concern with having two similar sculptures in the park.
“I can’t support the smaller one, and I’m a (canoe) guide,” he said. “Bill Mason? Bill who? What did he do for Ely? We don’t need two.”
He added, “My concern is that next week, or next year a group comes in and wants to put something up for the miners in the park. To me, the park is hallowed ground. It should be a long process to get the use of it for a permanent monument.”
The Park and Rec Committee will consider the proposed locations for the sculpture and bring a recommendation back to the council for approval.
Other business
In other business, the council:
• Established a committee to review a proposed purchase offer and business plan submitted for the Community Center.
• Approved a resolution seeking a $30,000 grant from the Department of Iron Range Resources and Rehabilitation for the Pioneer Mine Memorial Project.
• Accepted the resignation of Ely police officers George Burger and Maxwell Brewer, and Ely firefighters Matt High and Bob Zupancich.
• Approved a recommendation from the employee relations committee to approve the job description for an assistant police chief position and to post the position with a starting salary of $79,000 per year.
• Approved a commercial renovation loan for Pengal’s Inc. for $6,000 for a new roof at 137 E Sheridan St.
• Approved a temporary liquor license for the Dorothy Molter Memorial Foundation to have a beverage garden at the Ely Marathon in Whiteside Park on Saturday, Sept. 25.
• Approved the resignation of Chris Steele from the Ely Library Board.
• Appointed Todd Crego to fill the Donald G. Gardner Humanities Trust seat that was vacated by Chris Steele.