Ely on fire in season’s early-going

GREENWAY— Ely is looking like the team to beat in Section 7A this season as they dominated the Greenway tournament on Saturday, winning eight straight sets across four best-of-two matches. The …

Ely on fire in season’s early-going 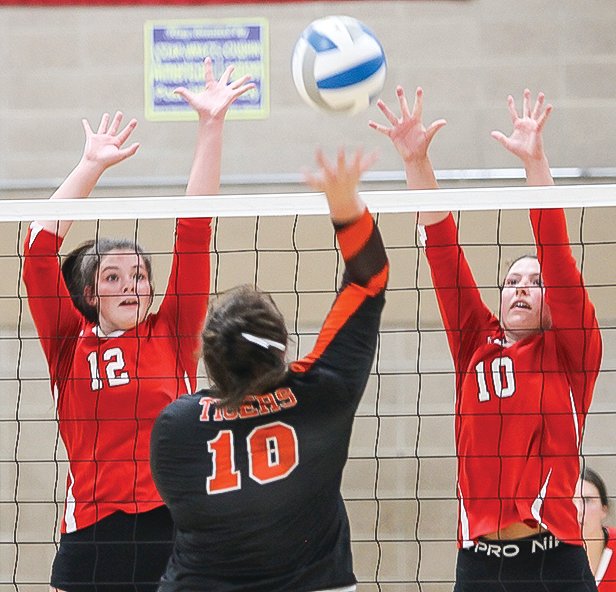 Ely’s Lilli Rechichi and Kate Coughlin team up to block a shot during last Thursday’s game with Cherry.
J. Greeney 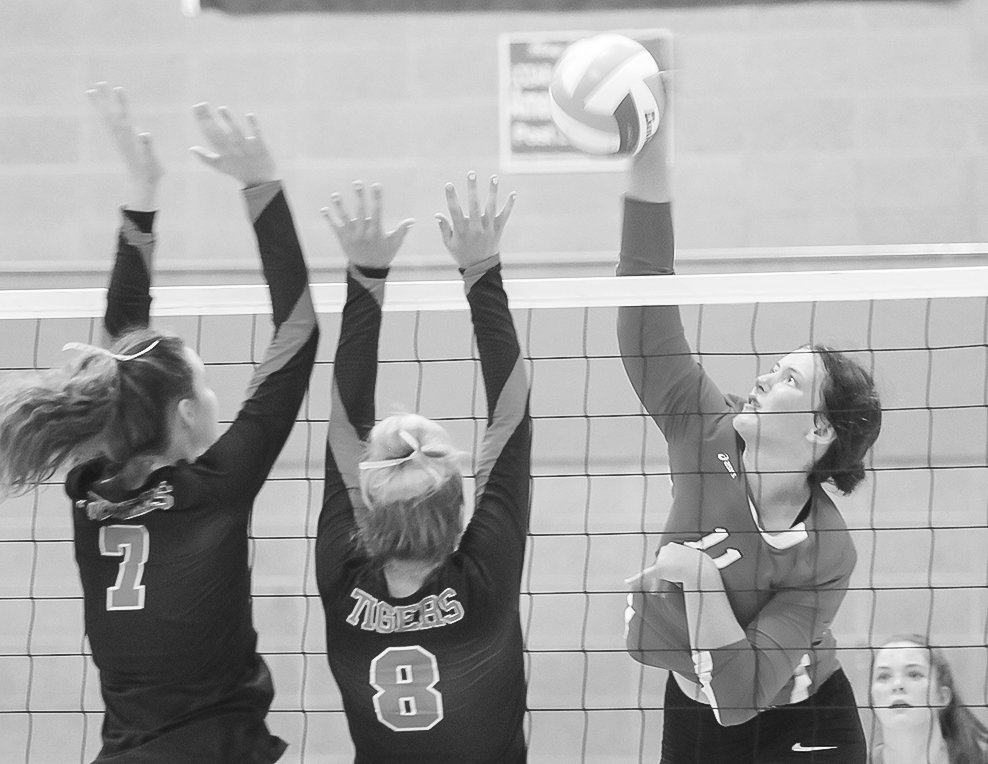 GREENWAY— Ely is looking like the team to beat in Section 7A this season as they dominated the Greenway tournament on Saturday, winning eight straight sets across four best-of-two matches.
The Timberwolves have not just gone undefeated in match play through the first two weeks of the season— they’ve yet to lose a single set across seven games to date. They were set to face 4-5 Mesabi East on Thursday after the Timberjay’s Wednesday presstime. The Wolves finished as the top seed in the section last season and look to have only improved on their performance in the offseason.
“We came ready to play today,” said Head Coach Megan Wognum following Saturday’s tournament in Greenway. “We have been working hard on getting our passes spot on knowing that the rest will come. Today we showed that we are making progress every single day.”
Ely’s success has come from a remarkable team effort that’s not been reliant on any one player. The Wolves downed Northeast Range for the second time this season in the opening match of the tournament, 25-13, 25-8. They took Cherry in the second round, 25-19 and 25-11, before topping Greenway 25-12, 25-18. They topped Chisholm 25-12, 25-15.
Sophomore Lilli Rechichi led the team in kills over the four games, with a tournament total of 28, along with 16 digs and a dozen aces. Junior Hannah Penke was close behind with 23 kills, 23 digs, and seven ace serves, while sophomore Clare Thomas added 11 kills, 16 digs, and six aces.
Senior Madeline Kallberg had a big day as well, tallying 13 kills and 26 digs on top of her 45 set assists. Junior Sarah Visser added 30 assists as well, while senior Courtney Eilrich tallied 22 digs.
Wognum was ebullient in the wake of the impressive performance. “I am so proud of how hard these girls have worked to get here and I can’t wait to see what the rest of the season brings,” she said.
Playing in a regular matchup on Thursday in Ely, the Wolves made short work of Cherry, taming the Tigers in straight sets, 25-12, 25-7, and 25-16.
The Wolves continued to show that it takes a team to be successful in volleyball as nine players combined for 32 kills and nine aces. Rachel Coughlin and Lilli Rechichi notched seven kills apiece, while Kate Coughlin added six kills along with six digs and four aces. Clare Thomas notched three kills and five digs, while Hannah Penke added four kills and two aces. Madeline Kallberg and Sarah Visser combined for 25 set assists.
The Wolves were set to host Mesabi East on Thursday and welcome International Falls to town on Tuesday. The varsity starts are set for 7 p.m.