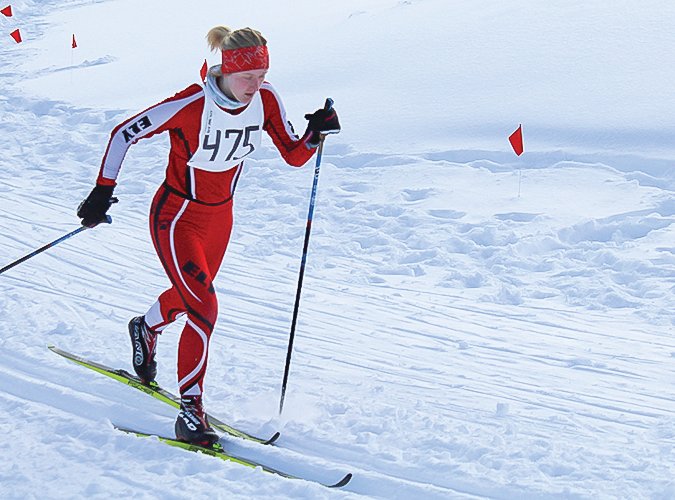 GIANTS RIDGE— Dozens of big schools from across the state proved that tiny Ely remains a contender in Nordic skiing, particularly in the girls competition. Ely junior Zoe Devine finished fourth in a field of more than 100 girls who competed in the classic portion of the Mesabi East Invitational on Saturday. Devine’s finish, in a time of 18:46.4, helped lead the girls team to a sixth-place finish in a field that included more than 50 schools.
Fellow junior Phoebe Helms finished in 11th place (20:26.6) in the freestyle competition, while junior Sydney Durkin (21:31.8, classic) and senior Gracie Pointer (22:33.8, freestyle) both finished in the top 50 to help lift the Wolves’ point total.
Meanwhile, on the boys side, senior Gabriel Pointer finished in 16th place overall in the freestyle event (16:54.1) to lead the Ely boys to a 19th-place finish in the team ranking. Senior Jon Hakala finished in 28th place in the classic competition, with a time of 17:54.8, and Micah Larson finished 34th in the same event with a time of 18:07.4.
Ely Invite
Skiing on familiar ground at Hidden Valley, the Timberwolves had little trouble dominating the top spots against a far smaller field at the Ely Invitational meet, held Jan. 4. Devine took the top spot in the classic competition with a time of 18:58.9, beating the second-place finisher, from Mesabi East, by more than a minute and a half. Helms finished fourth with a time of 20:52.9 and Durkin and Pointer finished seventh and eighth respectively to help the Wolves edge Grand Rapids 384-381 in the team competition.
For the boys, Pointer topped the field in the classic contest with a time of 17:08.1, beating teammate and second-place finisher, Jon Hakala, (17:38.4) by a full thirty seconds. Teammate Micah Larson finished fifth with a time of 18:29.7, but without a fourth teammate competing, the Wolves finished in second place behind Mesabi East. The team scores are based on the points from each team’s top four finishers.
The Wolves were set to hit the road on Saturday to compete at the Marshall Sprints in Duluth, with an 11 a.m. start.