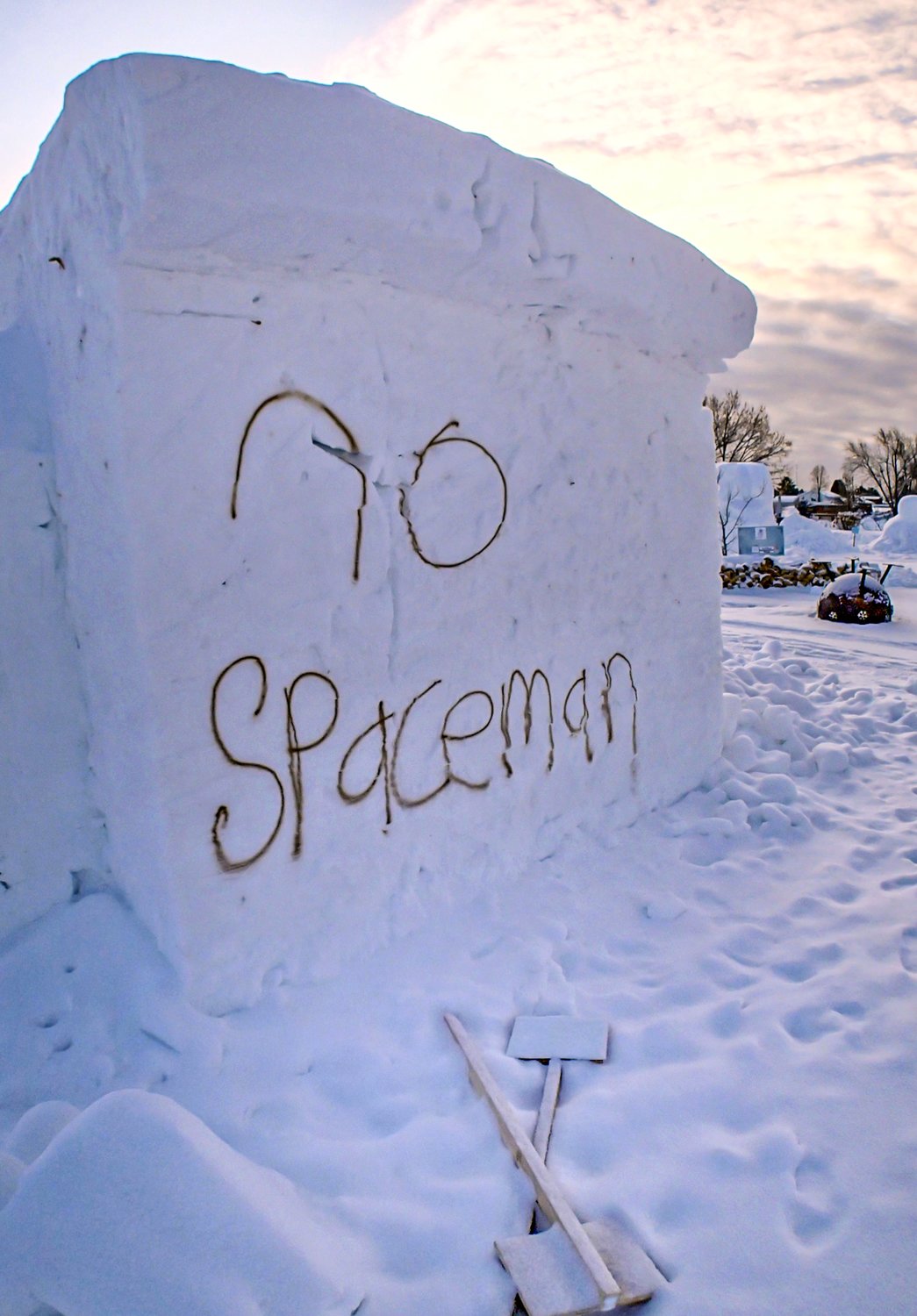 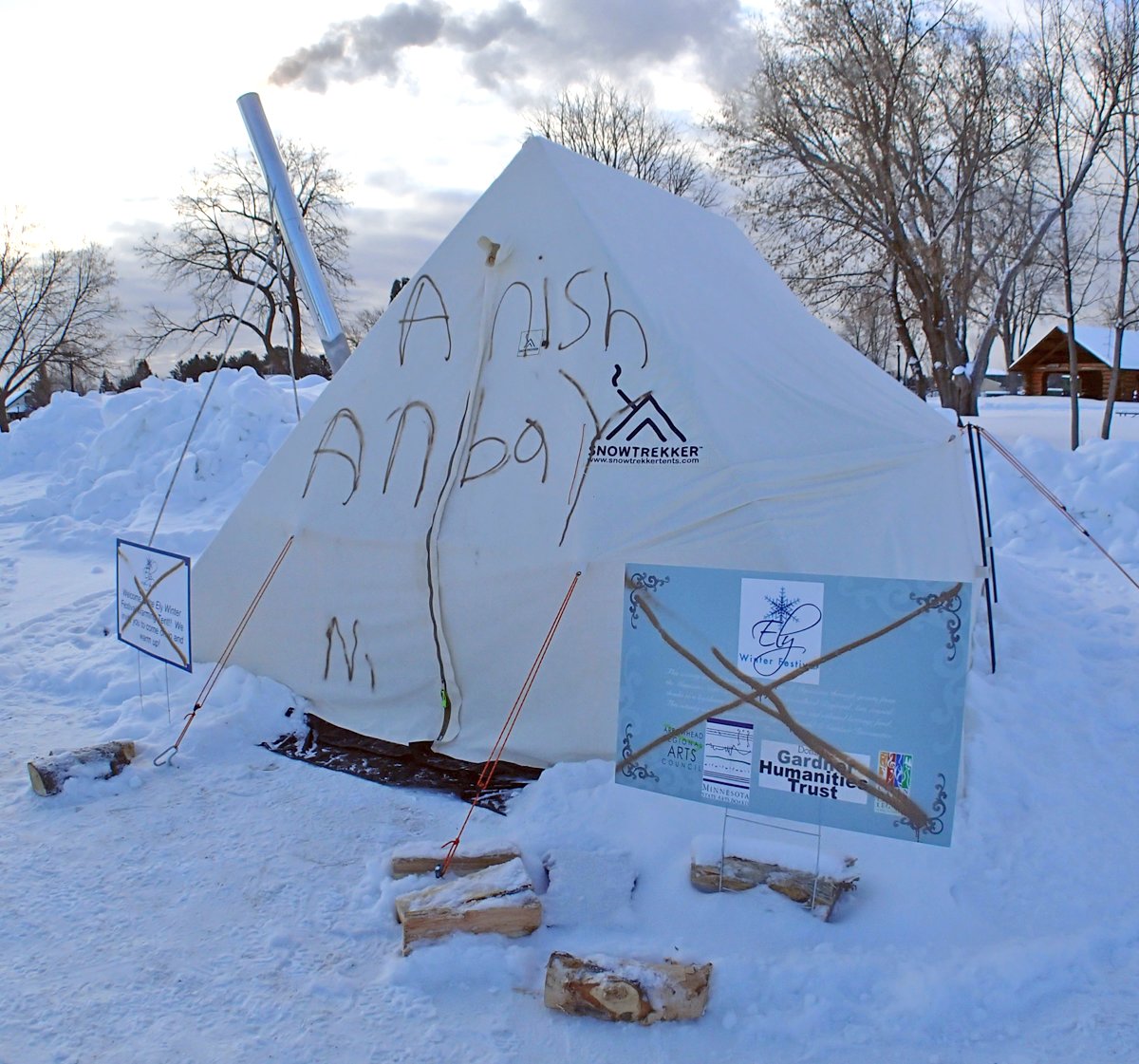 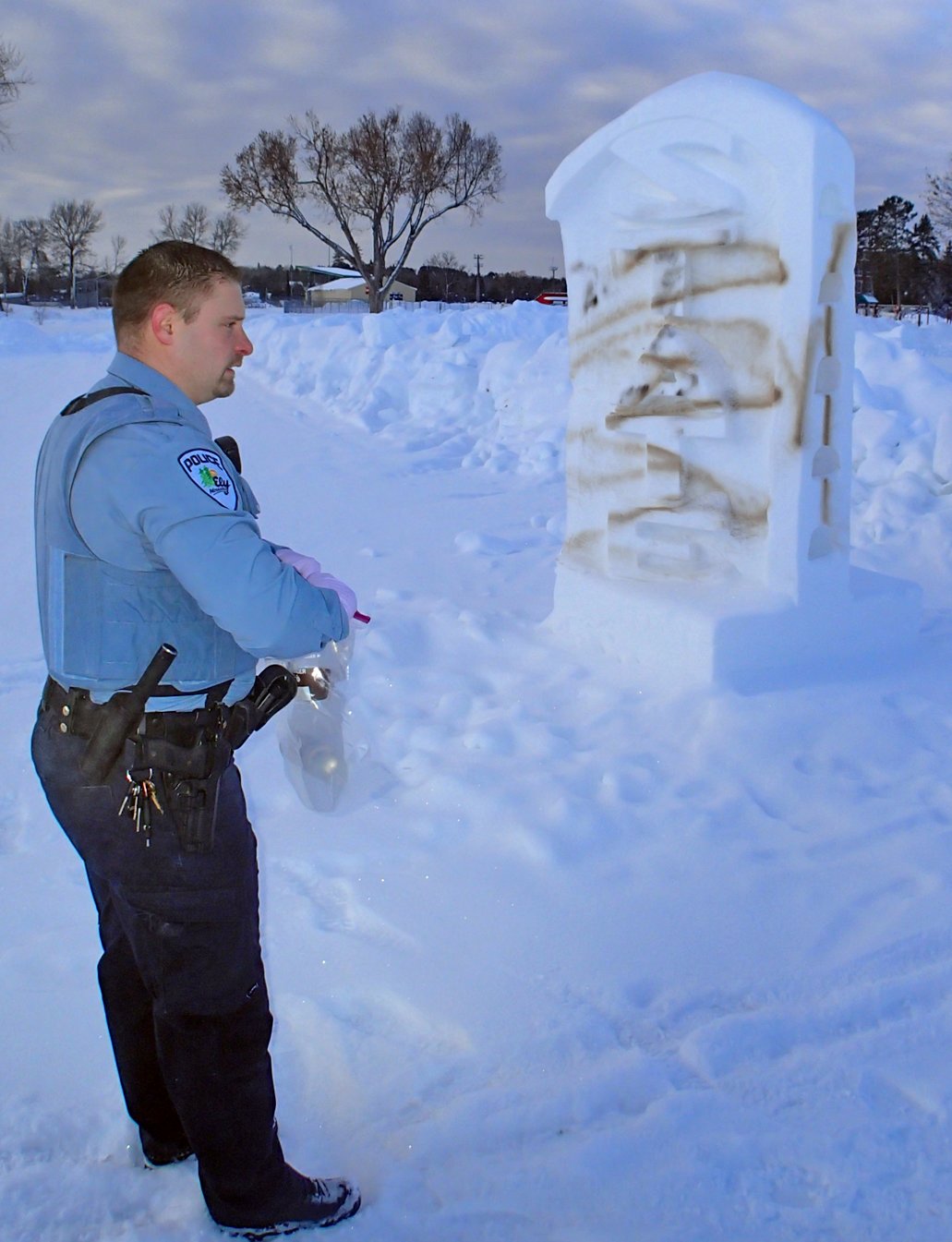 I am proud to say, we are a resilient festival and we have overcome this outrageous act of hate.”
Shawna Vega

ELY—Vandals spray-painted snow sculptures, signs and a warming tent at Whiteside Park late last week just as the community’s Winter Festival was getting underway.
“They tagged just about every snow sculpture here and many identification signs,” Ely Police Department patrolman Adam Borchert said as he picked up an empty spray can early Friday. “They even wrote on the canvas warming tent set up for the festival.”
Borchert said the vandalism likely occurred after 11 p.m. Thursday and before sunrise on Friday. The incident remains under investigation by the Ely Police Department.
It appears that brown spray paint was the vandals’ favorite color. Large “x’s” and “no spaceman” appeared in many places. Many sculptures were not only painted on, but several were damaged or destroyed completely.
“Our student-mentoring block, which was nearly completed by students from the high school and college, was a beautiful wolf,” said Winter Festival Executive Director Shauna Vega. “They smashed the face and ears off.  Many of the sculptures that were animals had the faces or heads destroyed. I’m just sick about it. Why would anybody want to do this? This is not what our community is about.”
According to the police report on the incident, the canvas tent, which was recently purchased by the Ely Winter Festival organization, is valued at $1,900. A city worker, who remains unidentified, told police he saw a male in the park at about 4 a.m. “shaking what he thought was a spray can. He didn’t see any damage so he never called in.”
Winter Festival officials were advised that there is footage of the vandal posted on the Facebook page, “What’s Up Ely,” but Vega could not confirm that. The police report indicated that Officer Borchert “spoke with all businesses that have cameras in the area and that he has, so far, been unable to find any leads.”
Several local businesses stepped up to lend a hand.  The Boathouse Brewpub and Restaurant is offering ten free pizzas to anybody providing information that leads to an arrest.  “A2B Taxi, along with the Northern Tier Boy Scout Base were camping in the park over the weekend to discourage any similar behavior,” Vega said.
In past years, private security guards were hired to patrol the park once the festival started. Many snow artists had just started shaping their designs late Thursday. By Saturday afternoon, all signs of the vandalism had been removed.
“I am proud to say, we are a resilient festival and we have overcome this outrageous act of hate,” Vega added.  “Our board rallied. The carving teams, both professional and amateur, along with the students rallied.  We are thrilled to report that the sculptures have all been repaired, the signs have been replaced and the 2020 Ely Winter Festival is going to be the best one yet.”
Anyone with information about the incident is urged to call the Ely Police Department at 218-365-3224.