REGIONAL— If you liked last winter’s plentiful snow and mostly seasonable temperatures, you may be in luck. The outlook for the upcoming winter suggests it’s rinse and repeat as a … 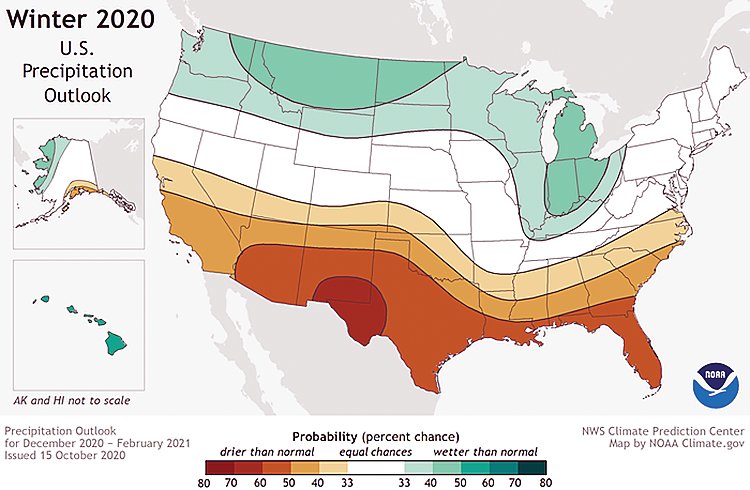 REGIONAL— If you liked last winter’s plentiful snow and mostly seasonable temperatures, you may be in luck. The outlook for the upcoming winter suggests it’s rinse and repeat as a building La Niña pattern in the Pacific portends a higher likelihood of storminess in the Upper Midwest.
The National Oceanic and Atmospheric Administration, or NOAA, has issued its annual winter outlook and it points to near-normal temperatures and above-normal precipitation for northeastern Minnesota. “With La Niña well established and expected to persist through the upcoming 2020 winter season, we anticipate the typical, cooler, wetter North, and warmer, drier South, as the most likely outcome of winter weather that the U.S. will experience this year,” said Mike Halpert, deputy director of NOAA’s Climate Prediction Center.
While the southern half of the country is expected to be warmer than average this winter, below-normal temperatures are favored from the Pacific Northwest into the Northern Plains, including the northwestern third of Minnesota. Other parts of the state are forecast to have equal chances of above- or below-average temperatures this winter.
Meanwhile, the northern tier of U.S. states, from the Pacific Northwest through the Great Lakes region are expected to see above-average precipitation. In northeastern Minnesota, that’s likely to translate into abundant snowfall, portending favorable conditions for outdoor recreation.
While a wetter-than-average winter in northeastern Minnesota could offer some relief from ongoing drought conditions, NOAA’s latest forecast projects that drought conditions will linger. Winter is typically Minnesota’s driest season, with average total melted precipitation of less than one inch per month from December through February. But parts of northeastern Minnesota, such as the Ely area, are likely to end 2020 as much as 6-8 inches below average for the year. While recent snow and cold temperatures have sharply reduced fire danger and moistened the ground, water levels still remain lower than normal across much of the region, particularly in Lake and Cook counties and portions of eastern and far northwestern St. Louis County. The U.S. Drought Monitor listed those areas as experiencing moderate drought as of Wednesday. Much of the rest of St. Louis County is considered abnormally dry.