REGIONAL – Fire crews working to contain wildfires burning in northeast Minnesota were aided by cool temperatures and scattered rain showers over the last week, and by Tuesday the Greenwood … 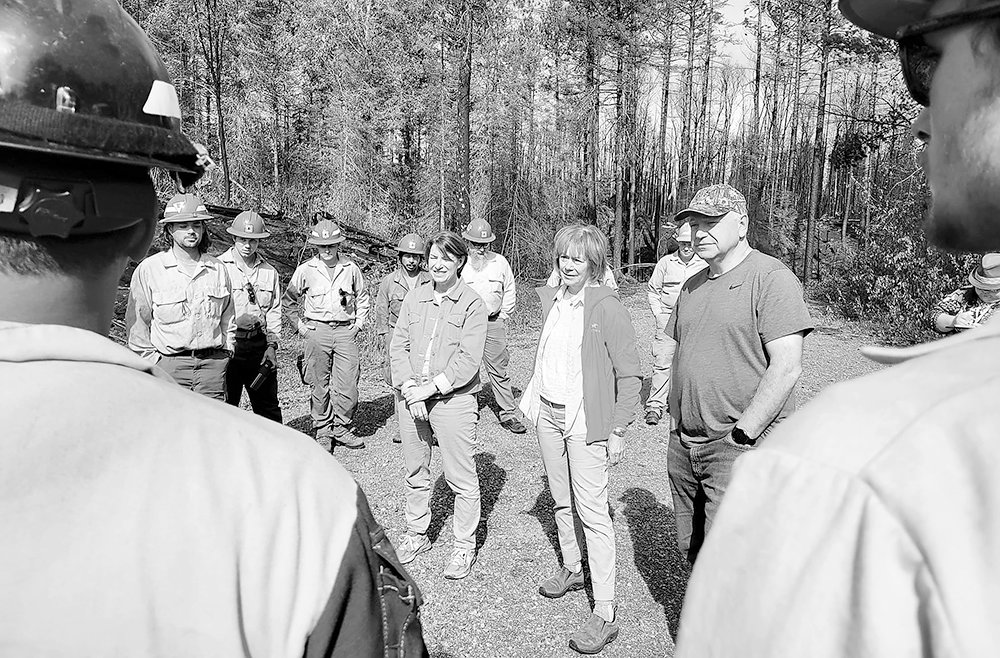 REGIONAL – Fire crews working to contain wildfires burning in northeast Minnesota were aided by cool temperatures and scattered rain showers over the last week, and by Tuesday the Greenwood Fire, burning west of Isabella, remained at 26,112 acres and was nearly 50 percent contained. As many as 344 personnel were reported to be working on the fire.
“Thanks to favorable weather and fire efforts, the threat to cabins, homes, and recreational sites in the area is greatly diminished,” according to an update from the team managing the fire.
Crews working on the north and west perimeter of the fire “began hauling out fire hose and other equipment, as the threat to structures was reduced,” officials said. Meanwhile efforts to build fire lines on the south and east sides of the fire continued this week.
Early this week, firefighters patrolled and mopped up along Hwy. 2, paying particular attention to an unburned island of fuel near the southwestern fire edge. They continued to secure the southern and eastern fire perimeters with handlines and mechanical lines. Crews also scouted along the Hwy. 1 corridor and mopped up any remaining hot spots.
A surface storm system and cold front over the region on Tuesday brought numerous showers and thunderstorms. Rainfall amounts were expected to range from a tenth to a quarter of an inch with locally higher amounts.
Hwy. 1 is closed from New Tomahawk Road to Lankinen Road. Hwy. 2 is closed between Hwy. 1 to Hwy. 11. Only residents with passes issued by the Sheriff’s Office may travel along these highways, officials said Tuesday.
The lightning-caused Greenwood Fire has burned 14 homes and cabins and several dozen other structures since it was first spotted Aug. 15. While some residents along and near Lake County Hwy. 2 have been allowed through checkpoints to visit their properties, about 200 homes and cabins remain evacuated due to the fire.
BWCA reopens
Portions of the Boundary Waters Canoe Area were reopened on Saturday, Sept. 4. The U.S. Forest Service made that announcement last Wednesday, after the Timberjay’s weekly press time.
The lifting of the closure, which had been in place since Aug. 21, includes all of the wilderness with the exception of relatively small areas around the Greenwood, John Ek, and Whelp fires. The Forest Service has also modified the areas affected by those closures.
“We’re thrilled to reopen some of our public lands to visitors,” said Connie Cummins, Forest Supervisor on the Superior. “The drought is not over but we’re starting to see more rain and lower temperatures. These conditions moderate fire activity and lessen the chance of new fires showing up.”
The Forest Service decision means any permits previously reserved on or after Sept. 4 are still valid. Users can now reserve available quota permits at www.recreation.gov.
Meanwhile, the two largest fires burning within the Boundary Waters Canoe Area Wilderness also remained quiet early this week. The John Ek Fire is about 1,350 acres, and the nearby Whelp Fire is about 50 acres. Both were zero percent contained as of Wednesday.
Crews completed contingency lines on three sides of the fire. Should the fire become active again, these contingency lines will be used as necessary, including conducting burnouts along them and/or turning on sprinkler systems adjacent to those lines. Structure protection crews are still doing Firewise work (assessing structures, removing debris and thinning fuels near homes) on the south side of the Gunflint Trail, from Poplar Lake to Round Lake and Tuscarora Lodge.
“With stronger, gusty winds, some creeping and surface spread in exposed dry marsh grasses is possible, but no significant fire movement is anticipated,” fire officials reported.
Camping on Superior National Forest lands outside of developed campgrounds is again open to visitors. This includes backcountry sites and dispersed camping.
The Forest Service also lifted a heavy equipment restriction late last week which allows certain land management activities to again operate during normal business hours. Although the restrictions were lifted, officials asked that contractors and the public continue to practice diligence on forest lands as drought conditions remain, as does fire risk.
Fire restrictions also remain in place on the Superior National Forest, though campfires are now allowed in fire rings in specified fee campgrounds.
Please visit the forest website for more information or call your local district office.