AURORA- When the North Woods baseball team took the field for a June 3 Section 7A tournament game against Carlton at Mesabi East, the Grizzlies knew that any loss from that point on would end their … 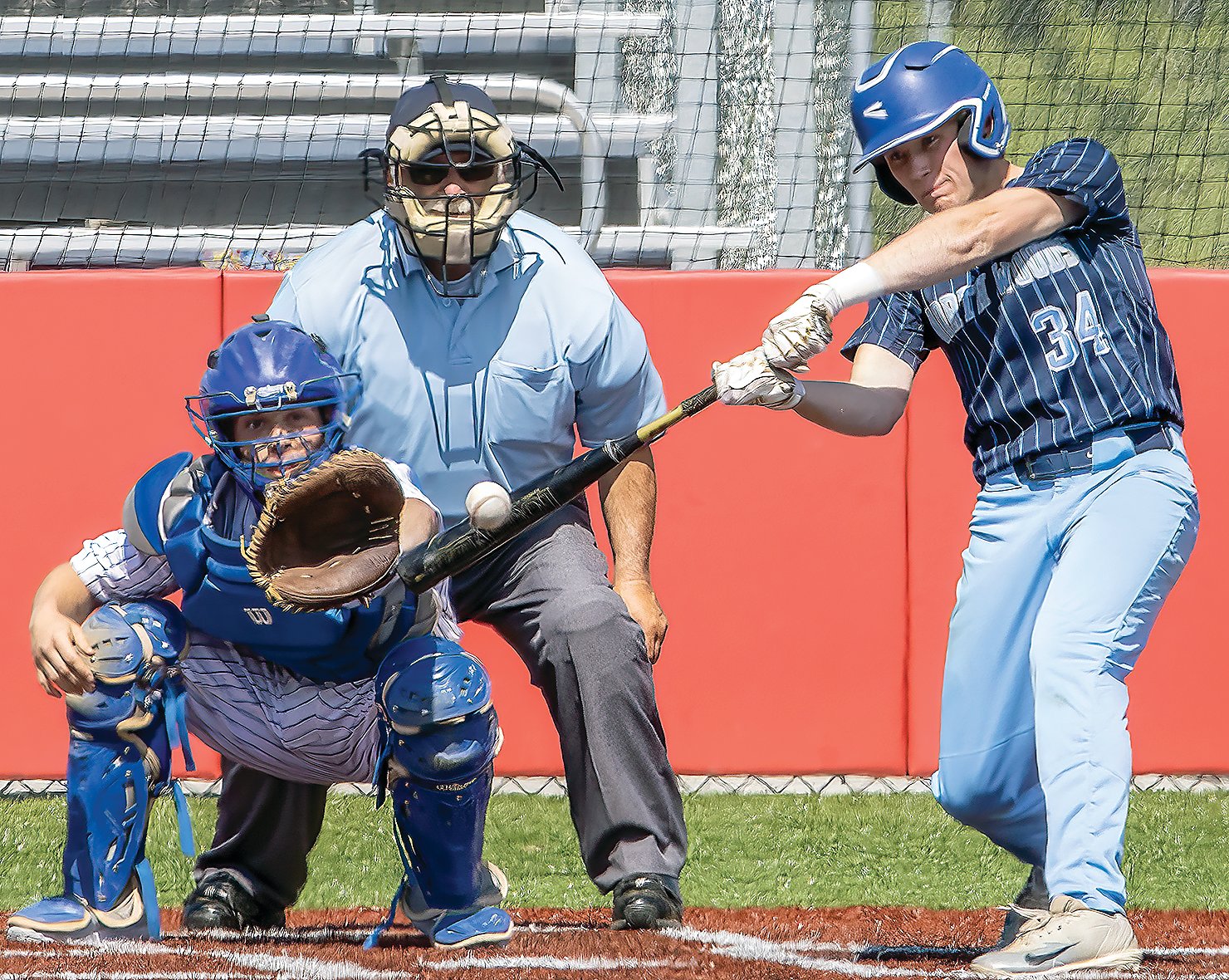 The Grizzlies’ Ben Kruse puts the wood to the ball during their recent playoff game with Carlton.
D. Colburn 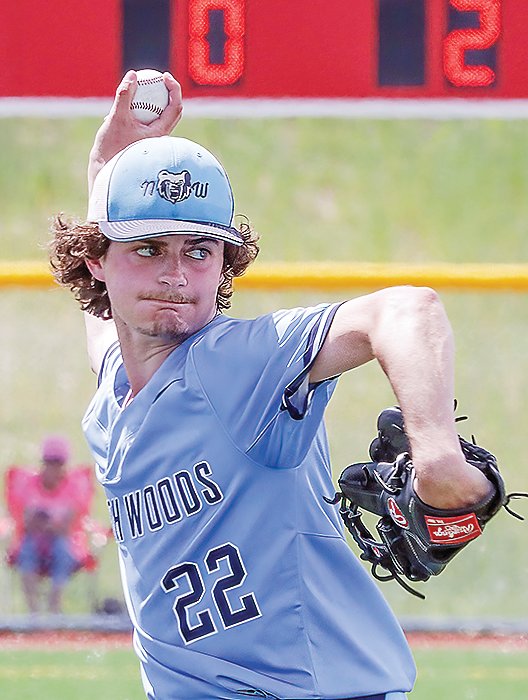 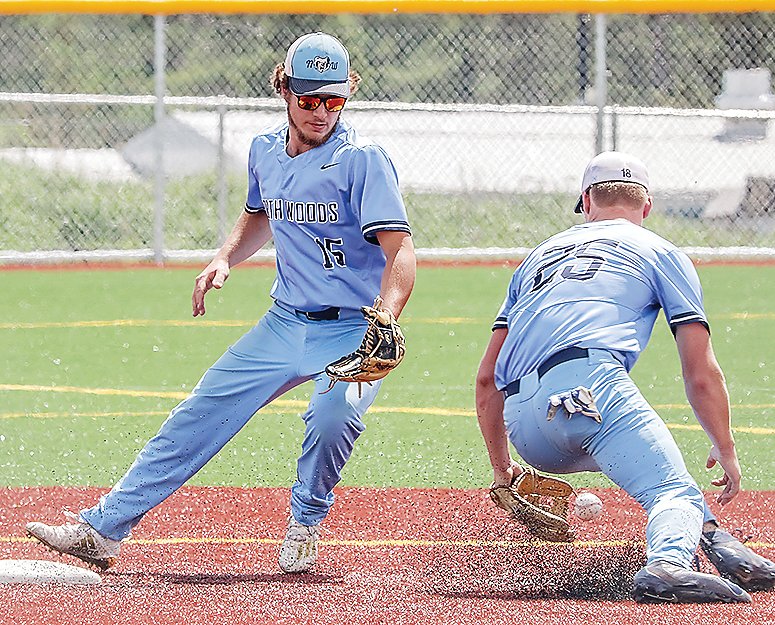 North Woods infielder Zach Cheney scrambles for a bobbled ball as Chris Chaulklin covers at second. The two combined for the out.
D. Colburn
Previous Next
Posted Wednesday, June 9, 2021 6:39 pm

AURORA- When the North Woods baseball team took the field for a June 3 Section 7A tournament game against Carlton at Mesabi East, the Grizzlies knew that any loss from that point on would end their season and their state tournament hopes.
The Grizzlies have used every tool in the toolbox – power hitting, aggressive base-running, precision pitching, stellar defensive play, and capitalizing on opponent mistakes, to name a few – to take down Carlton, Nashwauk-Keewatin, Cherry and Silver Bay and position themselves for a sectional championship.
North Woods cashed its ticket to the championship on Tuesday night with a 6-3 win over the Mariners, a 7-3 loser earlier in the day to South Ridge.
In a game where all of the runs were scored in just the first three innings, Head Coach Jeff Smerud said the Grizzlies’ good start was critical.
“The thing that helped us is that we got guys on base right away, and then Zach Cheney stepped up and hit a big two-run double,” Smerud said.
Cheney was also pitching for North Woods, and he served up a mistake that Silver Bay’s cleanup hitter pumped out of the park for a two-run homer to tie the game. But outside of that, Cheney was solid, as was the defense behind him.
“He gave up four hits total to a team that had two losses all year going into that game,” Smerud said.
By drawing walks, connecting on timely hits, and cashing in on errors, the Grizzlies tallied four runs in the third inning for more than enough runs to usher them into the championship.
NW downs Cherry
The Grizzlies opened play on Tuesday against Cherry, a team Smerud used to coach before coming to North Woods, and the question going into the fourth inning was which pitcher would blink first. Andrew Zika was mostly zeroed in for the Grizzlies, but Tigers ace Beau Barry had a 1-0 lead as the Grizzlies came to bat in the bottom of the inning.
Barry looked sharp striking out two of the first three Grizzlies he faced, with Zika slipping in a single to right.
And then, inexplicably, Barry blinked, lost control, and walked three consecutive batters to score North Woods’ first run. A throwing error on an infield grounder by Cole Thiel allowed Ty Leinonen and Talen Jarshaw to cross the plate, and Louie Panichi stole home when the Cherry catcher couldn’t handle an errant pitch. With only one hit, the Grizzlies had a 4-1 lead.
The final innings weren’t without some anxious moments for Zika and the Grizzlies, but everyone came up with plays when the Grizzlies needed them, particularly center fielder Jake Panichi, who made two spectacular grabs in the seventh inning to send the Tigers home for the season.
“That’s what it came down to – who made the mistakes and how bad would it cost you,” Smerud said. “That’s what it takes sometimes, is to get lucky.”
Panichi’s acrobatic catches were “game-saving,” Smerud said.
“If they get through, they change the tide of the game,” he said. “If you give up big hits, the other team gets a little life. He took the life right out of them.
North Woods tops N-K
The Spartans sent the Grizzlies to the elimination bracket with a 5-2 win on June 1. Two days later, North Woods sent them home for good with a dominant 15-0 win.
The big inning was the third, when North Woods scored seven runs to double their lead to 14-0. Cole Thiel and Zach Cheney each went 2-of-3 at the plate as the Grizzlies smacked 10 hits for 13 RBIs in the game while drawing nine walks. Andrew Zika got the complete game five-inning shutout.
Grizz edge Carlton
The Grizzlies’ winning streak started with a tough 4-2 squeaker over Carlton on June 3. In the decisive fifth inning, Zach Cheney and Jake Panichi reached on singles and scored on grounders by Andrew Zika and Ty Leinonen for a 4-1 lead. Panichi started the game on the mound and held Carlton in check with only four hits until Zika came on with two outs in the seventh to secure the win.
Championship tilt
North Woods drew state-ranked South Ridge for their opponent in Thursday’s scheduled championship matchup. South Ridge won two earlier meetings of the teams. The Grizzlies needed to beat the Panthers twice to advance to state. The results of Thursday’s action will be posted on the Timberjay website and Facebook page, as well as in next week’s print edition.