Timberwolves struggle with two starters out in road contest; fall 78-43

FIELD TWP- On the road and without two of their starters, the odds were stacked against Ely as they took the court last Friday against rival North Woods, but the scrappy Timberwolves made a game of …

Timberwolves struggle with two starters out in road contest; fall 78-43 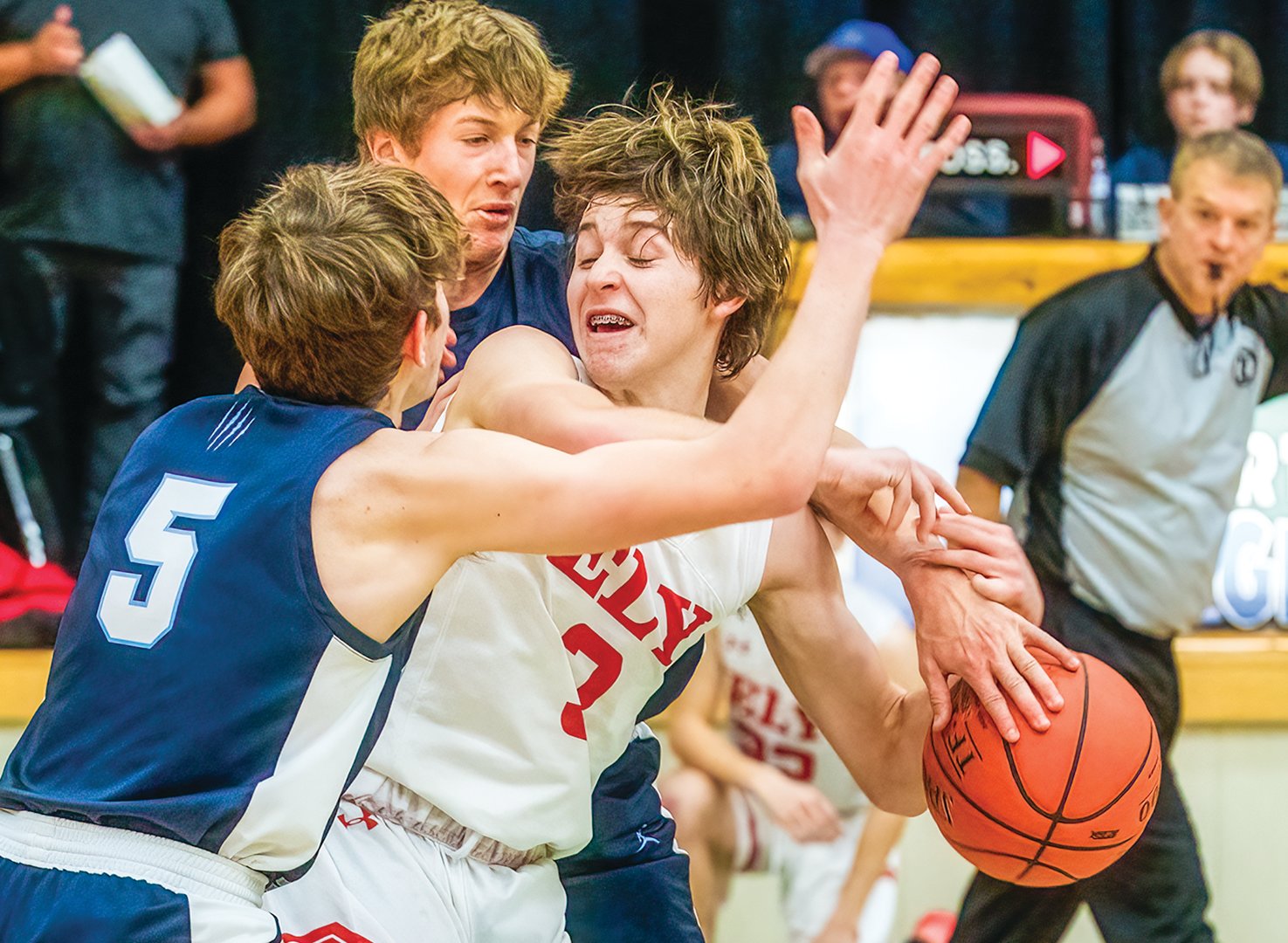 As the Grizzlies’ Davis Kleppe (#5) halts the progress of Ely’s Joey Bianco, Jonah Burnett reaches in from behind to knock the ball away.
D. Colburn 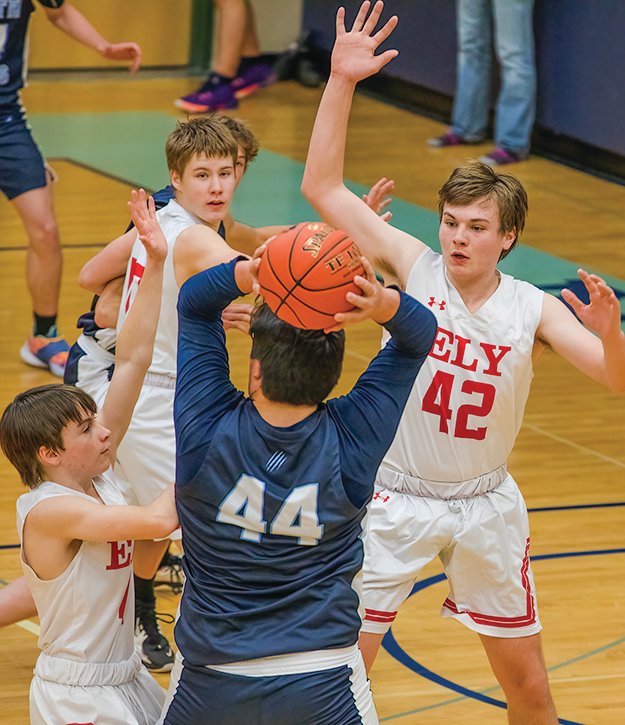 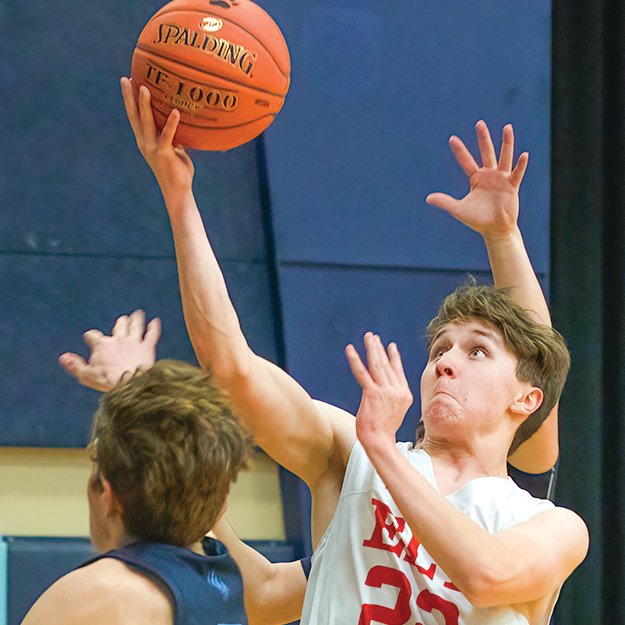 FIELD TWP- On the road and without two of their starters, the odds were stacked against Ely as they took the court last Friday against rival North Woods, but the scrappy Timberwolves made a game of it in the first half before the Grizzlies pulled away in the second for a 78-43 win.
The Wolves have been playing without senior guard Harry Simons, sidelined with a broken hand, and senior forward Mason Davis wasn’t available Friday, either, forcing Ely Head Coach Tom McDonald to rely even more heavily on his bench.
The Grizzlies pounced on the advantage immediately with an opening trey from senior guard T.J. Chiabotti that ignited an 11-0 run in which all five North Woods starters scored. The Grizzlies’ full court, man pressure kept the Timberwolves off the board until junior guard Joey Bianco finally scored on a drive at the 11:21 mark.
“I was wondering if we were going to score, let alone compete with them, because we just couldn’t hit a shot in that first six or seven minutes,” McDonald said. “But then we hit that shot and then more shots started to fall.”
Indeed, they did. For the next three minutes, Bianco couldn’t miss, connecting from inside, three-point range, and at the free-throw line on a nine-point binge that put the Timberwolves back in the game at 16-11. Eighth-grade guard Jack Davies dropped in a trey for Ely, narrowing the score to 16-14, before a T.J. Chiabotti bucket stopped the Ely streak. Then Davies stroked another long bomb to pull the Wolves within one, 18-17.
A baseline jumper by sophomore guard Jonah Burnett and an inside score by senior center Sean Morrison put the Grizzlies back up by five, 22-17, but Ely junior guard Jason Kerntz knocked down a three-pointer to keep the Wolves within two.
That’s as close as Ely would get, as the Grizzlies turned on the jets for a 15-4 run, punctuated by two treys from Jared Chiabotti and one from T.J. Chiabotti, to go up 37-24. Davies canned a buzzer-beating triple at the half, but North Woods held a comfortable 41-27 lead at the break.
The Grizzlies came out roaring in the second half, going on a 19-3 blitz that squashed any thoughts the Wolves had of making another run. Senior guard Alex Hartway stripped the ball and went coast-to-coast for a layup to put North Woods up 60-30 at the 8:36 mark, and senior guard Ty Fabish got in on the scoring spree with a three-pointer down the stretch in the Grizzlies’ 78-43 win.
“We ran into a really, really good team,” McDonald said. “I thought we hung with them for a while, but they’re way too athletic and skilled and then they took it to us in a second half.”
North Woods Head Coach Will Kleppe knew going in that despite being shorthanded the Timberwolves would put up a good fight.
“Tom does a great job with them,” Kleppe said. “He’s always got them ready to play and they’re going to play super hard, they’re going to limit their mistakes. We were trying to get a little cute on some of our double-teams sometimes, and we left some shooters open. We got a little sloppy and they didn’t and that let them hang around. It was a good learning experience for us.”
Ten Grizzlies notched scores in the contest, led by T.J. Chiabotti with 17. Jared Chiabotti tallied 16, and Burnett and Hartway each scored ten. Collectively, the Grizzlies hit 50 percent of their shots while holding the Wolves to 36 percent. North Woods had 12 steals and forced a total of 20 turnovers that they converted into 29 points.
Kleppe complimented his team’s ball movement against Ely’s zone defense but noted that the Grizzlies will need to work on getting the ball down low to Morrison more often to open up better outside shots.
Bianco was the only player in double-digits for Ely with 20.
“Joey does a really nice job for us,” McDonald said. “He leads us on the offensive end, but they were just dogging him all night and wouldn’t let him have many good looks.”
McDonald said he expected to get Davis back this week, and possibly Simons, too, although he could be another week away from returning.
“Hopefully we’ll get healthy here and can avoid major sickness,” he said. “I think we’ll be much better when we’re back at full strength.”