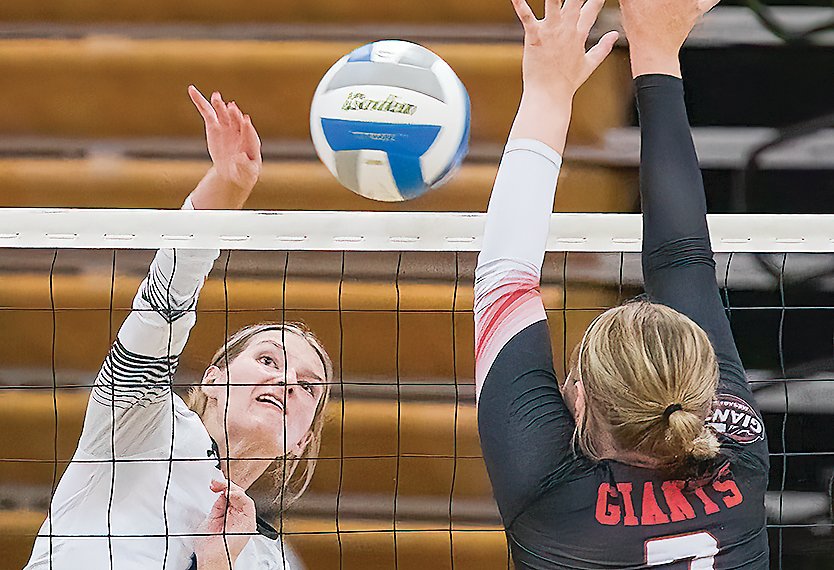 FIELD TWP- In racking up three more match wins on the road in six days against Mesabi East, Deer River, and South Ridge, the North Woods volleyball team’s early season record of 5-1 is vastly improved from last year’s 2-4 start.
Chalk that up to the Grizzlies’ ability to compete successfully and maintain their intensity against foes with varying styles and talent. North Woods has been dictating the style of play and it’s working, as evidenced by having lost only two games in those three matches while winning nine.
“We have definitely grown as athletes and have learned how to compete better,” Head Coach Kandi Olson said.
South Ridge
The Grizzlies’ most recent victim Tuesday night was South Ridge, a tough test on the road following Monday’s long road trip to Deer River.
“South Ridge is definitely a talented team, they are super aggressive all the time, and they have great defense,” Olson said.
Perhaps the Grizzlies were suffering from a bit of bus lag, as Panthers raced to a double-digit lead midway through the first game before the Grizzlies kicked things in gear. North Woods made the score more respectable, but still lost 25-17. It was the first time this season that North Woods lost the first game of a match.
North Woods battled to regain control in a nip-and-tuck game that the Grizzlies eventually won, 27-25. It didn’t get much easier in the next two games, but the Grizzlies rode momentum to close out the match with winning scores of 25-20 and 25-21.
“Our middles looked strong yesterday, which definitely threw a little wrench in the hitting for South Ridge,” Olson said. “And our outside hitters, Lauren Burnett and Skyler Yernatich, they were busy and working hard all night long, trying to put the ball down and tried to find holes in South Ridge’s defense.”
Deer River
The Grizzlies were clearly the superior team on the floor against Deer River on Monday night, and they’re learning to play up to that status. Big runs coupled with many service faults by the Warriors added up to big wins, 25-8, 25-10, and 25-10, and a quick end to the match.
“Our passing was really good, so we were able to try new things offensively, things that we’ll need in the future,” Olson said. “It was nice to have that ability to work in some live game situations on things that we will face in upcoming matches.”
Mesabi East
True to their name, the Giants put a slightly taller team on the floor against the Grizzlies, and while competitive throughout most of the match, they couldn’t rattle the Grizzlies, even after winning a hotly contested second game 26-24.
North Woods has displayed a welcome tendency for getting off to a hot start from the opening whistle, a particularly advantageous trait in hostile road environments, and that was the case against the Giants, with the Grizzlies notching a 25-14 win.
After Mesabi East tied the match at 1-1, the Grizzlies overcame an early 5-0 deficit in the third game and took firm control midway through to win 25-17. After losing the opening point of the fourth game, the Grizzlies never trailed, building and maintaining a comfortable five to six point lead en route to a match-ending 20-25 win.
“One of the critical things that we’ve seen as far as growth this year is that this group is able to go into battle knowing that they have worthy opponents on the other side that are going to push them to the limits, and perhaps win games, and they’ve been able to maintain their composure and come back with a victory,” Olson said.
Olson singled out Yernatich and Burnett as key contributors across the matches.
“Skyler has been just an absolute force on the court,” Olson said. “Lauren has come in as a freshman and is willing to go for the kill every single time. It’s great to see.”