Fire near Bezhik Lake in Trout Lake portion of the wilderness

Fire near Bezhik Lake in Trout Lake portion of the wilderness 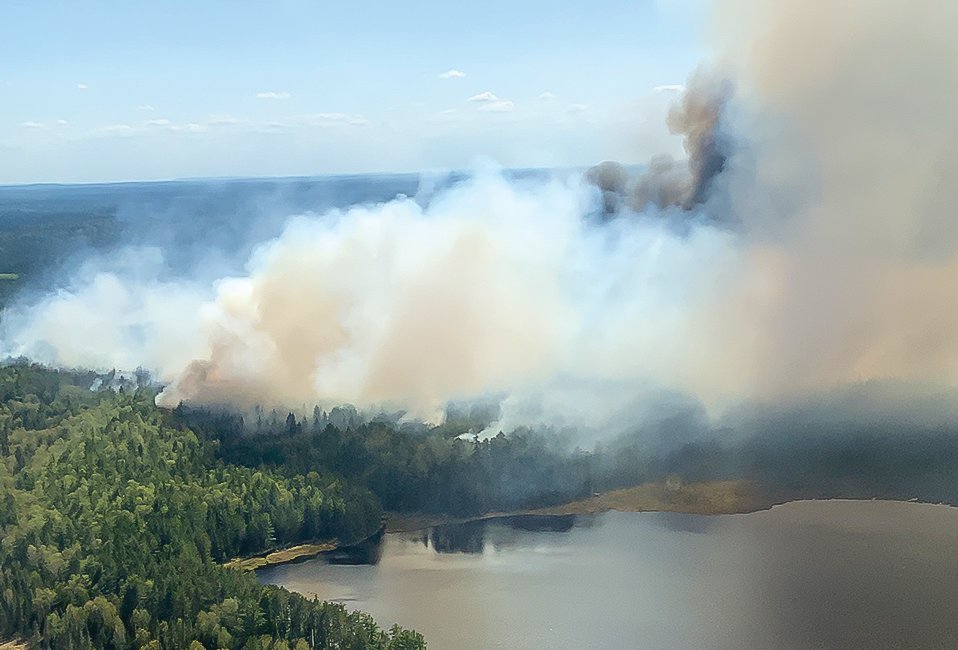 Smoke was visible Monday from the Bezhik Fire, located east of Trout Lake in the BWCAW.
US Forest Service
Posted Wednesday, May 19, 2021 4:41 pm

SUPERIOR NATIONAL FOREST— A lightning strike fire west of Big Moose Lake, in the Boundary Waters Canoe Area Wilderness, continued to burn as of Wednesday as Forest Service fire officials tried to contain the spreading blaze with aerial water drops. Fire officials estimated that the growing fire had torched 950 acres by late Tuesday, as dry conditions, moderate winds, and low humidity helped fan the fire. That estimate was down somewhat from an initial Forest Service report of 1,635 acres.
The blaze was first spotted on Monday and was estimated at about ten acres at that time, but low humidity and southerly winds prompted substantial growth in the fire on Tuesday.
Fire officials believe the blaze, located in a remote area far from canoe travel routes, was started by a lightning strike this past Sunday, as a line of thunderstorms moved through the area in the afternoon. Only spotty and limited rainfall was associated with the storms.
A very dry first half of May has increased the fire danger across the area, although the forecast of rain over the latter part of the week and the upcoming weekend could dampen that risk and aid firefighters in getting the blaze, dubbed the Bezhik Lake Fire, under control.
The fire presents a balancing act for fire officials. “It’s a tricky spot because it’s hard to get to,” said Tim Engrav, with the LaCroix Ranger District in Cook. The fire isn’t close to any travel routes, so putting firefighters at the scene is both challenging and risky. “You have to have a plan before you send in people,” said Engrav.
At the same time, the location is only a couple miles into the wilderness, and a private holding just north of the wilderness boundary could be impacted were the blaze to head that direction.
As of Monday, Forest Service officials were considering whether to allow the fire to play its natural role.The fire had been confined to the ground, with two-to-four-foot flame lengths, mostly burning in mature red and white pine. “This is a fire ecosystem and this could provide an opportunity for some natural activity,” Engrav added.
At the same time, fire officials remember the fallout from the Pagami Creek Fire, which started from a lightning strike back in August 2011 and burned slowly for more than three weeks before exploding into a massive wildfire that scorched nearly 100,000 acres, making it the largest wildfire in modern Minnesota history. “You can’t say it doesn’t come into the mindset,” acknowledged Engrav.
The Superior does have considerable resources on hand currently, since fire officials had been using the dry weather as an opportunity to make progress on prescribed burning plans in the Ely area. A 20-person hotshot crew from Montana and a ten-person crew from the southern U.S. have been stationed on the west end of the forest for the past few weeks to help with that effort.