TOWER— Wildlife manager Tom Rusch is reflecting on 31 years as a biologist for the Department of Natural Resources as he finishes the final month of his professional career. Rusch, who has been … 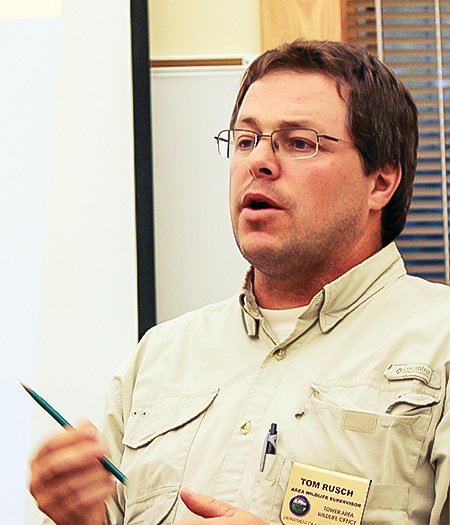 A younger-looking Tom Rusch during a DNR open house on Big Rice Lake back in 2012. He’s looking a little grayer now as he heads into retirement.
file photo
Posted Wednesday, October 6, 2021 5:42 pm

TOWER— Wildlife manager Tom Rusch is reflecting on 31 years as a biologist for the Department of Natural Resources as he finishes the final month of his professional career. Rusch, who has been the DNR’s area wildlife manager in Tower since 2003, announced he’ll be retiring next month. He said he’ll take thirty-plus years of fond memories with him.
“It’s been a good run and I’ve really enjoyed the journey,” said Rusch. “I could never have dreamed it would work out the way it did when I started in the wildlife field over 40 years ago.”
Rusch started with the DNR at Karlstad, in northwestern Minnesota, before moving to the Orr area office and later to Eveleth, where he spent ten years before taking the manager position in Tower.
For residents of northern St. Louis and Lake counties, Rusch has been among the most public faces of the Tower DNR staff, having conducted countless public meetings over the years to take input and share information on a wide range of issues, from deer management to wolves to wild rice. He also worked closely with local media, recognizing the importance of local newspapers in getting information about wildlife management out to residents of the area.
Throughout his tenure, Rusch has been a strong advocate within the agency for management practices that enhance wildlife habitat, which sometimes put him at odds with foresters. He wasn’t shy about weighing in, even during media interviews, about what he views as the negative impacts of overly aggressive timber management on a number of species in the region, including whitetail deer and fisher.
Rusch has also been outspoken about what he sees as the negative impacts of bear feeding and was a longtime critic of Dr. Lynn Rogers and his research methods, which involve habituating bears to the close presence of researchers.
Rusch served as the area’s wildlife manager at a time when many northern species appeared to be facing challenges from habitat changes, some caused by forest management and others by climate change. The area’s moose population has declined significantly, as have fisher, and even whitetail deer populations are generally under goal throughout the region, a reflection of a string of harsher than average winters in the late 2010s.
But Rusch remains optimistic about the state of wildlife in the region. “We are blessed with incredible wildlife resources in northeast Minnesota and I have been lucky to be a part of that,” he said. “I’ve also had the pleasure of working with top notch wildlife professionals throughout my career.  It has been a total team effort and I could not have done it without them.”
He noted that the area’s vast amount of public land, the most of any state east of the Rockies, provides unmatched opportunity for those who love the outdoors— and that includes Rusch himself, who is an avid hunter.
In fact, Rusch was at his grouse camp this week and will be spending even more time in the field once he says goodbye to the Tower area staff for the last time, at least as a fellow employee. Rusch said he’s grown to love northeastern Minnesota and plans to continue to live with his wife Deb at his current residence, located along the St. Louis River, south of Eveleth. “It’s been a great place to live and raise our family,” said Rusch. “The relationships we’ve established will last a lifetime.”
Rusch said he’s incredibly thankful for the chance to work in the area and believes the region benefits greatly from the tremendous public interest in wildlife in the North Country. “Without passionate outdoors-minded people our wildlife populations cannot be sustainable,” he said. “Thank you for fighting the battle with me.”