As I write this on a Sunday morning from my living room, I sit facing west, looking out over miles of the Lost Lake Swamp. I’ve written about the swamp more times than I can count because I … 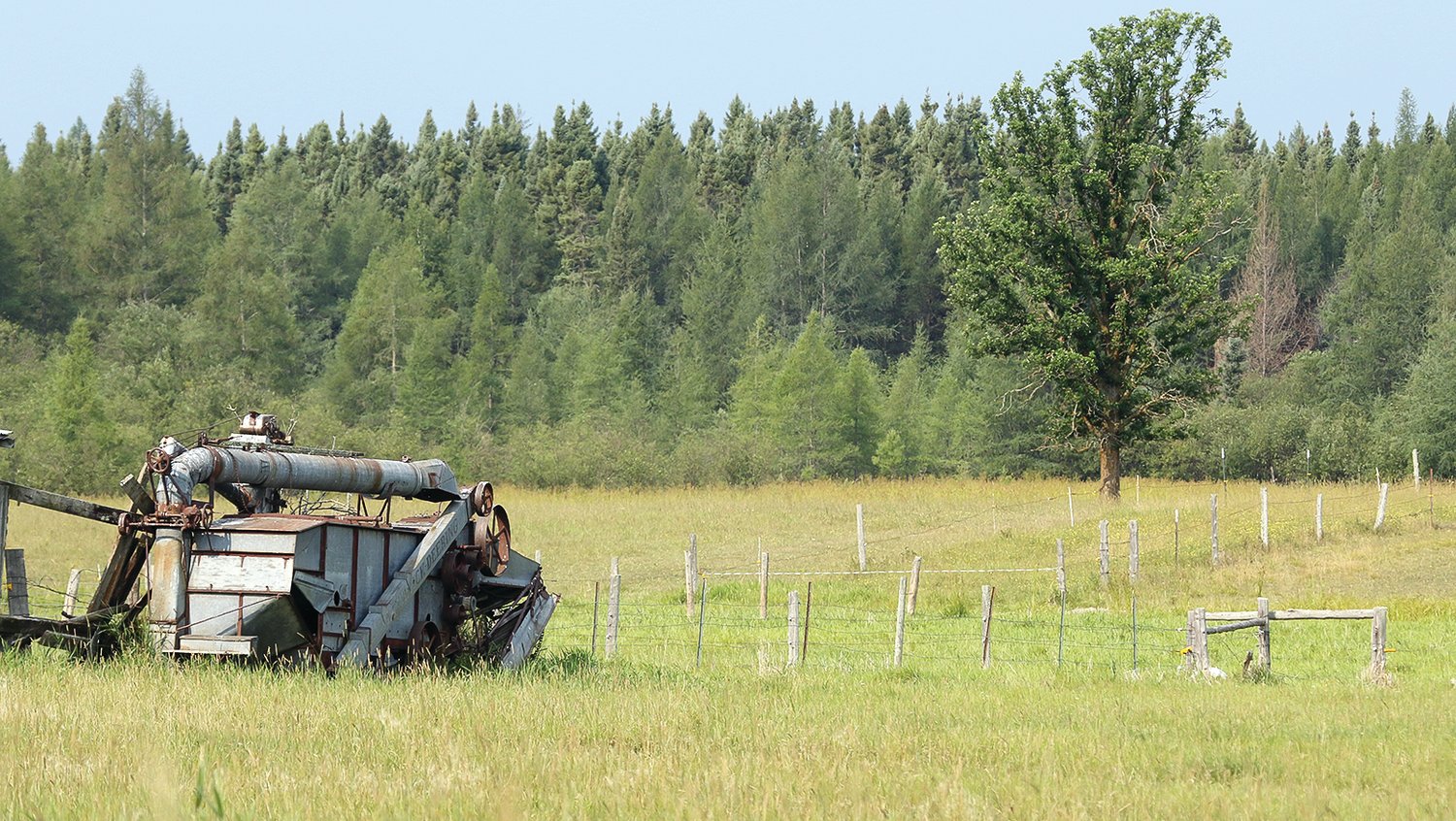 A long-abandoned harvester sits forlornly in a field, backed by tall tamarack and black spruce in the distance, a perfect example of the East Little Fork landscape.
M. Helmberger 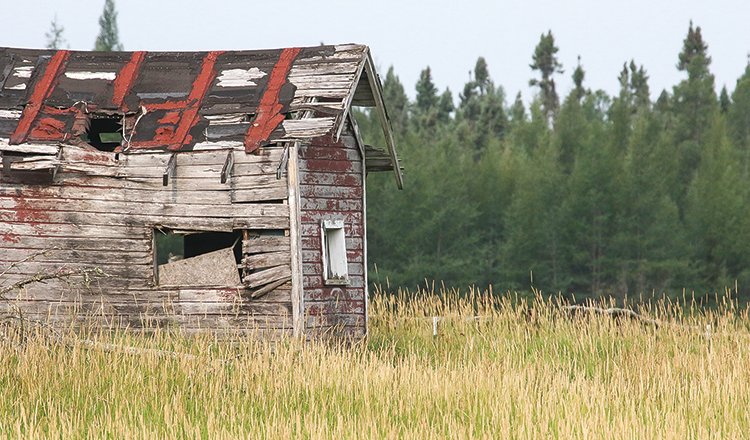 An old shed, an old field and a swamp forest in the background.
M. Helmberger 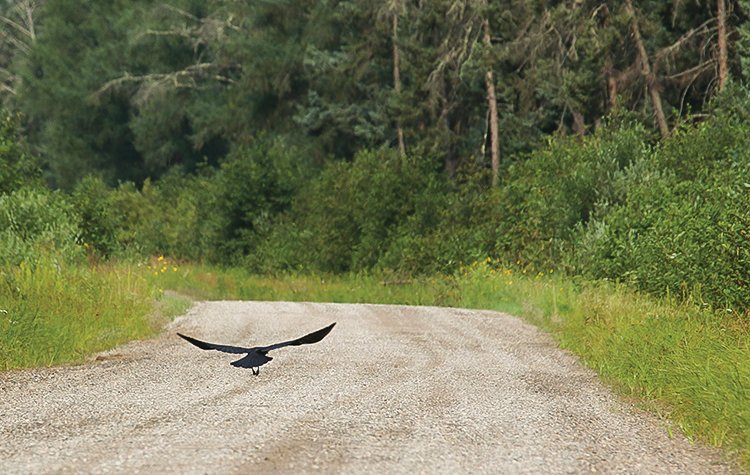 A raven makes its lazy takeoff along Johnson Road, one of the handful of backroads in the East Little Fork area.
M. Helmberger 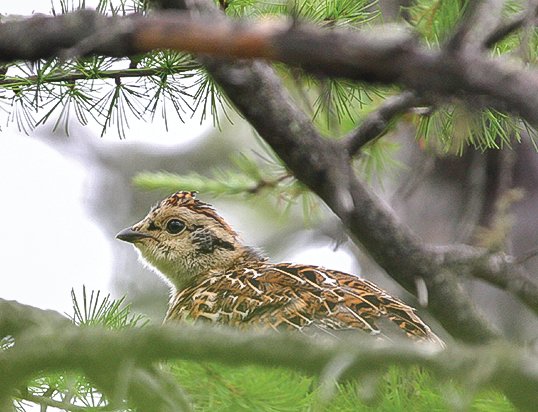 As I write this on a Sunday morning from my living room, I sit facing west, looking out over miles of the Lost Lake Swamp. I’ve written about the swamp more times than I can count because I find it a fascinating place, but as I look past the miles of stunted black spruce, the sedge meadows, and occasional upland islands of druid trees, I can see someplace else, far out on the edge of a very distant horizon.
While fingers of our swamp stretch nearly all the way to Cook, the main body of the swamp ends about eight miles west of here, in a place that locals refer to as East Little Fork. While I can’t imagine leaving my lookout here on the swamp’s east side, if I ever had to leave, East Little Fork is where I’d want to go.
Landscapes have always intrigued me and it was the wilderness landscape that plays out across swamp and the surrounding terrain that prompted me to buy a piece of the North Country in 1978, when I was still in high school (my father had to sign the paperwork). The wilderness landscape is notable as a place left to its own devices.
And that’s the landscape that lays out for eight miles to the west of here, broken only in the slightest form by the occasional hunting cabin. It wasn’t always that way. Indeed, our wilderness is dotted with the remains of quite a few foundations of old homesteads, dug into an occasional lump of washed gravel left in between the rocky outcrops by the last glacier.
It was the coming of electricity that turned the area from a place lightly settled by overly-optimistic homesteaders back to wilderness. The power extended several miles to the east of Cook, as far as East Little Fork. From Tower, the power extended up along Lake Vermilion and just about a mile west of the Y Store along Hwy. 1, where it terminates at a residence about a mile to our southeast. In between is eight miles that is unserved by the grid from either Cook or Tower, and that fact quickly cleared this stretch of permanent residents, leaving those old homesteads, for the most part, to be reclaimed by the forest.
This eight-mile stretch forms a transition between the largely unbroken forest to the east and what passes for farm country in our area by the time you reach the richer soil of the Little Fork Valley around Cook. East Little Fork, which extends several miles to the east of Cook, is where that transition takes place, creating a pastoral landscape sculpted in places by humans, but still clinging to its wilderness tendencies around the edges. You might see a neighbor’s residence across the field and down the gravel road a spell, but you know that timber wolves and the occasional lynx or moose are still meandering around the back forty.
For birders, it’s a remarkable place, full of diversity, where you can hear the bubbling notes of a bobolink followed a mile later by the springtime flutter flight of a spruce grouse. It’s home to bluebirds, magpies, and dickcissels, all birds that you’re unlikely to ever encounter in the deep woods on the east side of the swamp. It’s home to all the birds of the boreal woods combined with many of the birds of open country, normally found further to the west. Birds are mobile, of course, and will find and take advantage of habitat wherever it presents itself.
While East Little Fork qualifies as farm country in our area, it’s pretty marginal ag land, which is the kind I’ve always preferred. Marginal farms often have the slightly neglected look that signals that whoever is working the land either makes a living from something else, or is barely scraping by. The fences are older and a bit saggy, especially near the water hole where it’s too wet for fenceposts. The old barn, which has stood unused ever since the hassles of feeding and watering a dozen head of cattle became too much to handle, is starting to sag. The weeds seem to be winning over the crops. The hayfield gets mowed later and later, leaving more habitat for ground-nesting birds and pollinators. When I was much younger and hunted pheasants in Iowa every fall with my father, we’d drive right by the well-tended farms. We knew it was the rundown farms that held the birds, and always seemed to have an old, grizzled farmer in dirty overalls standing in the farmhouse doorway when we asked permission to go chase a few.
The exact boundaries of East Little Fork aren’t entirely clear to me, but in my mind it includes that area located north of Leander Road up to County Rd. 115, starting a couple miles east of Cook until the electric lines end.
I assume this area got its name from its location, on the very eastern headwaters of the Little Fork River, which flows in its slow, winding fashion through the heart of this place. Still, it’s not a place you can learn about on Google. It’s settled, but only sparsely so, encompassing portions of two unorganized townships, the northern part of 61-17 and the southern portion of 62-17.
It doesn’t have the allure of Lake Vermilion just to its north, or the high rocky outcrops like the one I live on here on the swamp’s east side. It’s just rural, bordered by wilderness. And I can see all the way there from my living room.