Mayor accused of fanning the flames

ELY – Twitter comments have embroiled another politician in controversy. This time, it was Ely Mayor Chuck Novak in the hot seat at Tuesday’s city council meeting as several residents and …

Mayor accused of fanning the flames 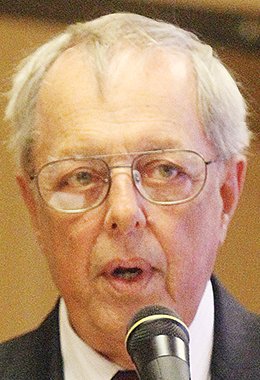 If I’m working in the mines and you don’t support the mine, I’m not spending my money there. It’s as simple as that.”
Ely Mayor Chuck Novak

ELY – Twitter comments have embroiled another politician in controversy. This time, it was Ely Mayor Chuck Novak in the hot seat at Tuesday’s city council meeting as several residents and local business owners chastised the mayor over comments he recently posted in support of a boycott against Fortune Bay Resort Casino.
Novak had lauded Sen. Tom Bakk’s decision to cancel his annual political fundraiser, traditionally held at Fortune Bay, because the Bois Forte Band has joined the Minnesota Chippewa Tribe in support of a federal bill to ban copper-nickel mining in a portion of the Superior National Forest located within the watershed of the Boundary Waters Canoe Area Wilderness. That bill, which does not prohibit iron mining in the affected area, would effectively end prospects for the proposed Twin Metals copper-nickel mine near Ely.
Novak, who has been a vocal supporter of the Twin Metals proposal, had also suggested that the organizers of other area events, like the popular snowmobile Fun Run, should consider following Bakk’s lead. Other supporters of the Twin Metals mine have also weighed in in support of a boycott on pro-mining Facebook sites.
But at least a few Ely residents took exception to Novak’s comments.
Carol Orban read from a recent news story on the controversy in the Hibbing Daily Tribune that quoted Novak in support of a boycott. Novak initially tried to blame the reporter of the story, who is relatively new to the region, for misquoting him.
But Orban pressed him. “Did you say that people shouldn’t spend their money to profit an organization that doesn’t support their way of life?” she asked.
“Maybe something like that,” Novak answered. “I’ll stand behind a statement like that. If I’m working in the mines and you don’t support the mine, I’m not spending my money there. It’s as simple as that.”
Orban continued, “These are our neighbors. And they have their way of life. They want their water and hunting, fishing and wild rice grounds protected. They have every right to advocate for their point of view, and I feel (your comments) were unnecessary. Why create more conflict and bad feelings up here? I am disappointed.”
Becky Rom asked the city of Ely to make a public statement that says it does not support the boycott of any business.” She contended that with the mayor’s quoted Twitter comments, the city of Ely is now involved in a “government to government” decision. “I don’t think that is where our city wants to be,” she said. “I don’t think we want the head of our city government promoting and advocating for the boycotting of any business, in particular, with a tribe that has a government-to-government relationship and is exercising its treaty rights. Canada also objected to Twin Metals.”
Betty Firth concurred with Rom’s request. “I have to say that I was appalled on hearing our mayor speak on this issue. I think it is outside the domain of the city council and outside of the mayor, specifically,” she said.
Peta Barrett said she felt the mayor made a “racist move” to suggest supporting a boycott of the Bois Forte Band. “They have a right to state their opinion, too. They have lands to protect, too. They were local people long before any of us came here,” she said. “I am not a fan of anyone representing our city, to cherry pick businesses to be boycotted. To advocate that the rest of us as a city should jump on board with this, is not right. I’m a business owner, one who opposes copper-nickel mining. Am I next? Not 100 percent of this community agrees with you, Mayor Novak, on copper-nickel mining.”
Steve Piragis thanked the mayor for the free advertising in mentioning his business in the HDT article, but doubted he would receive any benefit in the context that it was made. “Anytime you mention the idea of boycotting anything, it’s kind of a dirty word. It hurts,” he said. “Whether you are a casino, run by an Indian tribe or a small business run by a family, that is not a thing that politicians should be involved in. When you start talking about boycotts, it becomes a whole different level of vitriol. Talking about boycotts should be off the agenda for anyone who represents the people of this city.”
Before adjourning the meeting, Novak said the council would ponder what was said. “This is an open forum and we don’t take action on anything presented (this way) to the council,” he said. “That tends to get councils in trouble.”
Orban offered to forward the newspaper article containing Novak’s comments to the city clerk’s office for review by council members.

Other business
In other business, the council:
Appointed David O’Donnell to the Ely Public Library Board on a 5-1 vote. Jerome Debeltz was absent from the meeting. Angela Campbell voted against the motion. O’Donnell has served on the board two previous times, 2004-2007 and 2009-2012.
Approved the mortgage satisfaction document for Nancy and Richard Petrzilka.
Appointed election judges for the Presidential Nomination Primary on March 3.
Changed the meeting date of the city council to Wednesday, March 4, at 5:30 p.m.
Approved the 2020 Ely Utility Rates recommendation following a public hearing on the matter.
Received for review, from the Police Commission, a revised Ely Police Chief job description. Among the changes to qualifications are 12 years of experience as a full-time police officer, rather than six years.