Couple wants to keep historic business close to its roots

GREENWOOD TWP- Even though Gruben’s Marina and Resort is under new ownership, the name of this longtime Lake Vermilion institution will live on. The marina and resort, started by the Gruben …

Couple wants to keep historic business close to its roots 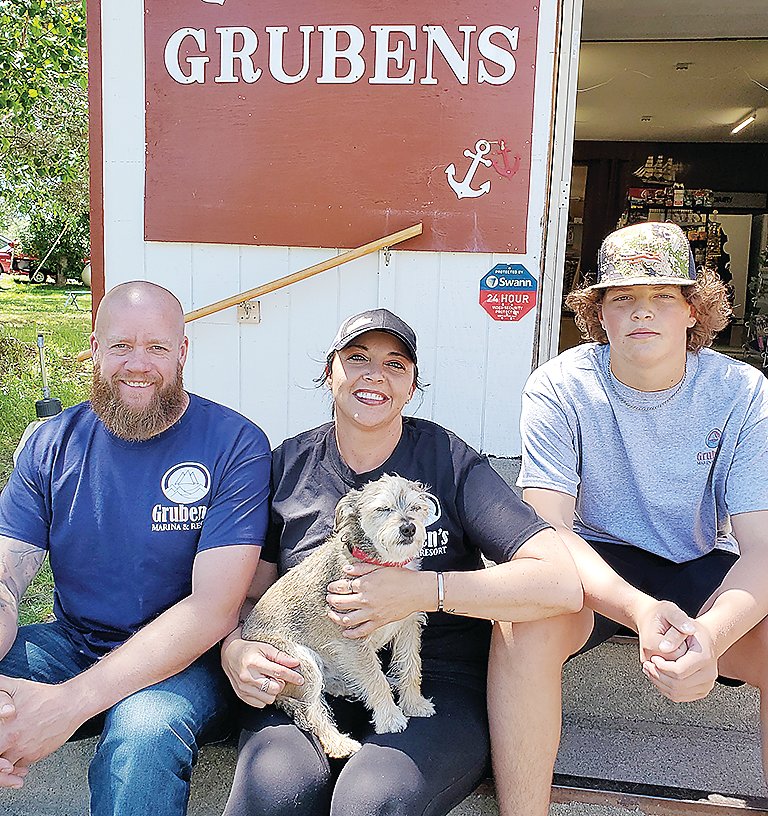 The new owners of Gruben’s Marina and Resort on the steps outside the business’s general store. Pictured are Fred Brett, Chessica Reichert, and their son Jace.
R. Brophy
Posted Wednesday, June 22, 2022 7:04 pm

GREENWOOD TWP- Even though Gruben’s Marina and Resort is under new ownership, the name of this longtime Lake Vermilion institution will live on.
The marina and resort, started by the Gruben family in 1919, was purchased this past winter by Fred Brett and Chessica Reichert and the owners have faced more than a few challenges since.
Fred, Chessica, their son Jace, and their four dogs moved to Lake Vermilion from the Twin Cities last December. It was a matter of opportunity knocking. Chessica said when the company where Fred was working changed ownership, they saw it as a sign to try something new.
The couple, both outdoor enthusiasts, had previously talked about owning a resort and Chessica said it didn’t take much to convince Fred to consider the idea. Their 16-year old son, who hopes to be a fishing guide, was all-in as well.
The couple started actively looking for a resort to buy. They checked out five places in all, but according to Fred, “everything brought us back to Grubens.” It didn’t hurt that Fred’s experience working in retail as a spirits buyer and Chessica’s experience as a realtor and property manager were a great fit to run a resort and marina that comes with a popular bottle shop and general store.
Fred also has family on Lake Vermilion and his new home at Grubens enables him to enjoy riding his Harley Road King on his favorite stretch of road to Ely and down Hwy. 1.
Of course, finding time in the summer for such pursuits can be tough for resort owners, but Chessica said they’re trying to make the time. “That’s the one balance we’re trying to do,” she said, adding that sometimes it’s just a quick excursion, like a quick paddle around the bay in her kayak. Fred echoed that sentiment. “That’s one of the beauties of being here. You don’t have to drive two hours to go out for a pontoon ride.”
Another thing the couple has been making time for is getting to know the people in their community. Chessica mentioned that they’ve joined the Vermilion Lake Association as well as other area groups, and they try to frequent local businesses often. The couple agreed on the importance of getting to know their neighbors. “We live here now,” Fred said.
So far the new adventure has been a positive one that the couple is embracing with great enthusiasm. The unusually high water this spring along with late ice out and early season storms that caused damage to the boathouse were learning opportunities that are not dampening their spirits. As far as future plans for Gruben’s, Chessica says the plan is to “build on what was here.” One way they have done this is by opening up the office building to be a welcoming family friendly space to get ice cream and make friends with Bosko and the rest of the canine family. “We’re very pet friendly,” she said.
So far, it appears long-times users of Gruben’s like what they see. “The history (here) is really neat,” Chessica said. “People have commented that it’s very much like what Sally was doing, and that’s a great compliment!”