FIELD TWP- The North Woods softball team wasted little time putting the visiting Timberwolves on notice last Friday that they would defend their diamond tooth and nail. The Grizzlies did exactly … 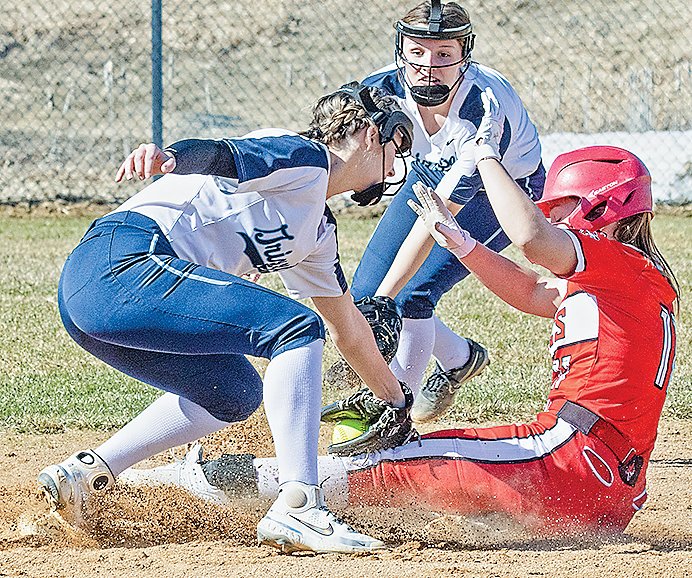 FIELD TWP- The North Woods softball team wasted little time putting the visiting Timberwolves on notice last Friday that they would defend their diamond tooth and nail. The Grizzlies did exactly that, cruising to a 13-0 win over their cross-county rivals.
Pitcher Evelyn Brodeen walked the first Ely batter, but catcher Avery Thiel was ready for the ensuing steal attempt, firing a rocket to shortstop Skyler Yernatich for the tag out. Yernatich caught an infield pop-up and Brodeen registered a strikeout to retire the side.
Ely hurler Katrina Seliskar got off to a shaky start by hitting leadoff batter Addy Hartway with a pitch, and the Grizzlies immediately took advantage. After a single by Helen Koch, Yernatich slammed a double to score Hartway. Koch and Yernatich both crossed the plate on a double by Brodeen, and the Grizzlies led 3-0 after one.
The Grizzlies were rolling again in the bottom of the third, getting five singles and scoring four runs for a 7-0 lead.
The only serious Ely scoring threat came in the top of the third when they loaded the bases with no one out. The Grizzlies hardly looked rattled, however, as Yernatich collected a grounder and fired the ball to the plate to ring up the lead runner and Brodeen gathered herself for two strikeouts to end the inning.
Hartway picked up two RBIs in the third with a triple, and a Thiel double, four singles and a walk in the fourth gave North Woods its winning 13-0 margin.
Brodeen went all the way on the mound for the shutout, giving up seven hits and three walks against seven strikeouts.
The Grizzlies were stellar at the plate in 27 appearances, hammering 16 hits while taking one walk and four strikeouts. Brodeen rang up 5 RBIs while going three-for-three from the plate, and Hartway, Koch, and Yernatich each registered two RBIs.