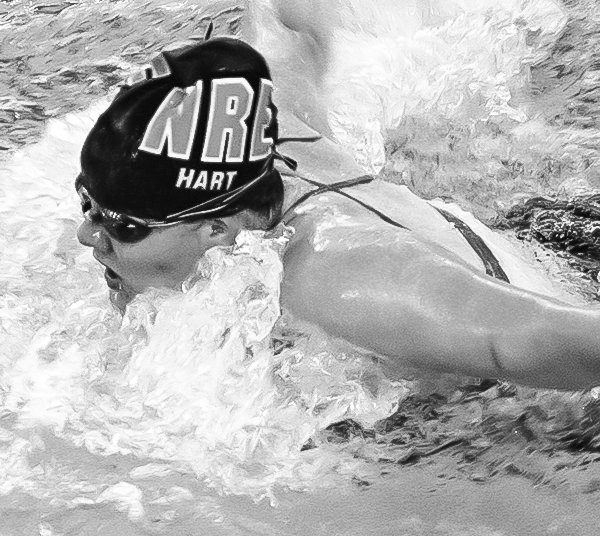 DULUTH DENFELD— Northeast Range-Ely swimmers notched a convincing win Monday as they tallied 17 first place finishes to outpace the Hunters 55-30.
Senior Lily Tedrick thoroughly dominated in several events, topping the field in the 200-yd. Individual Medley with a time of 2:32.72, more than 20 seconds ahead of the second-place finisher. She took first in the 100 Fly with a time of 1:10.49, nearly fifteen seconds ahead of the pack.
Morgan McClelland dominated in the 200 Free, with a time of 2:29.44, besting teammate Esther Anderson (2:38.45) by nine seconds and Denfeld’s top finisher by more than 25 seconds. She also took first in the 50 Free, with a time of 29.80.
Anna Larson took first (1:03.40) in the 100 Free, topping the field by eight seconds. Kelly Thompson won in the 50 Free, with a time of 29.80, while Maggie Dammann won in the 100 Back, edging teammate Anderson by just over a second.
NR-E also won two of the relay events, including the 200 Medley and the 200 Free.

Hibbing Invitational
Ely senior Lily Tedrick was the only Northeast Range-Ely swimmer to finish in the top five in any event during Saturday’s Hibbing Invitational, an event that drew eight schools and more than 100 swimmers to Hibbing High School.
Tedrick again showed her strength in the individual medley as she placed second in the 200-yard IM with a time of 2:32.03, less than three seconds behind the top finisher, Alyssa Jackson, of Grand Rapids. Tedrick placed first in the 160-yard IM last week during competition against Rock Ridge in Eveleth.
Tedrick also finished fourth in the 100-yard butterfly in a remarkably close contest in which the top five finishers all reached the touch pad within a second of each other. Tedrick reached at 1:09.45, or 0.83 of a second behind top finisher Chloe Petersen of Grand Rapids.
NR-E’s relay squad also posted top ten finishes in the 200-yd medley relay and the 200-yd freestyle relay. Senior Morgan McClelland, Tedrick, sophomore Anna Larson, and senior Kelly Thompson notched a time of 1:54.60 in the freestyle event, good for seventh place in a field of 27 relay squads, and 2:12.70 in the medley relay, good for eighth place among a field of 22 squads.
Grand Rapids dominated the meet, racking up 520 points to finish first as a team. Rock Ridge finished second with 421 points, while NR-E finished in sixth with 141 points. NR-E were set to return to their home pool in Babbitt on Thursday to take on Chisholm. They’ll compete in the Soderlind Invitational in Duluth on Saturday.