BREITUNG TWP- While repairs have been done to the Breitung paved trail between the wastewater ponds and McKinley Park Campground, a more comprehensive reconstruction might be in its future. The … 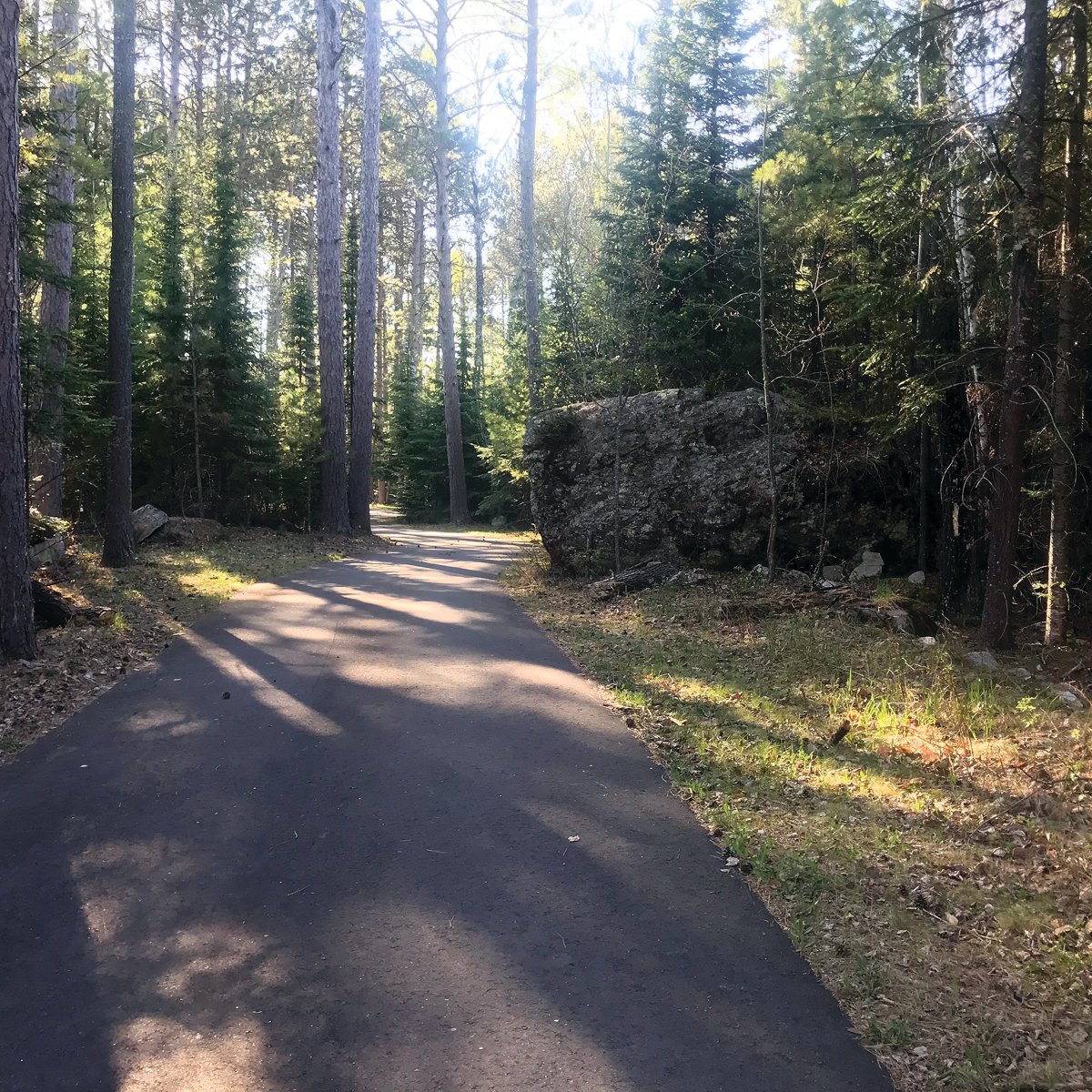 A portion of the Breitung trail near McKinley Park Campground.
J. Summit
Posted Thursday, July 2, 2020 9:24 am

BREITUNG TWP- While repairs have been done to the Breitung paved trail between the wastewater ponds and McKinley Park Campground, a more comprehensive reconstruction might be in its future.
The Breitung Board has been working with JPJ Engineering on plans to remove and replace the entire section of trail. The plans include creating a safer exit down to McKinley Park Campground. The trail currently goes straight down the hill into Cty. Rd. 697. The new plans call for a switch-back, creating a landing/overlook area, and then following the road to the west entrance of the campground.
At the June 23 meeting, Chairman Tim Tomsich said they would apply for funding from the IRRR Regional Trail Fund. If the project is funded by the end of the year, they would begin construction next spring. The cost is currently estimated at between $250,000 and $300,000. The township plans to use McKinley Park revenues for the local match on the project.
Looking ahead, plans are also being made to complete the loop “around the horn.” Currently, the trail ends about a half -mile past McKinley Park and pedestrians and cyclists have to follow Cty. Rd. 697 for a mile before picking the trail back up at HooDoo Point Campground. Tomsich said that the process to complete this portion of the trail could be time-consuming and complicated because the trail would be on property owned by Breitung, Tower, and St. Louis County and they would be applying for several grants. The trail would also go through a swampy area, which would require the project to go through an environmental review. Tomsich hopes that construction could start in 2023.
In other news, the board:
• Heard from the Minnesota State Demographer that the Breitung Township population is estimated to be 575 people as of April 1, 2019. This is down five people from the previous year’s estimate.
• Will wait to send payment to Tower Area Ambulance Service until a new contract is settled.
• Is asking residents to complete a survey at http://www.surveymonkey.com/r/3BLFJMN, or go to the Breitung Township website and click the link provided. The survey is about customer satisfaction with their internet/TV/phone provider and information is being used by the local Blandin Broadband group to work on the possibilities of bringing faster/more reliable internet service to the area.
• Accepted a $2,500 grant from Lake Country Power’s Operation RoundUp® and a $4,000 grant from Minnesota Power for fire department equipment replacement.
• Received $499 from Lake Country Power as a capital credit allocation.
• Approved the purchase of an iPad for the maintenance department for $1,240.
• Signed a five-year agreement with Midco.
• Accepted a new fire department member, pending completion of physical and background check.
• Heard that Renee Pearson will serve as deputy clerk.
• Heard that baseball tournaments will be held at the Soudan baseball field on Saturday and Sunday, July 11 and 12, and possibly on Thursday, Aug. 6.
• Heard that Mesabi Bituminous will add an additional layer of blacktop to the town hall parking lot and possibly behind the police department, price dependent; will work on drainage around the town hall; will put a grate on the open culvert on the south side of the driveway; will reseal concrete; will reseed on the south side; and put up a flagpole.
• Heard from Supervisor Chuck Tekautz who noted that many recreational vehicles such as ATVs, side-by-sides and dirt bikes have been driving very fast on township roads and recommended enacting a 15 mph speed limit ordinance for them.
The Breitung buildings will continue to be closed to the public until Aug. 1, except for township and fire department meetings, and the township will continue to follow the Governor’s orders. The next meeting will be held on Tuesday, July 21 at 12 noon.