Polar documentary to be filmed near Ely

ELY – The history of polar exploration will be in the spotlight next week in Ely, as a film company comes to town to shoot scenes for a upcoming documentary on Robert Peary’s 1909 dogsled …

Polar documentary to be filmed near Ely 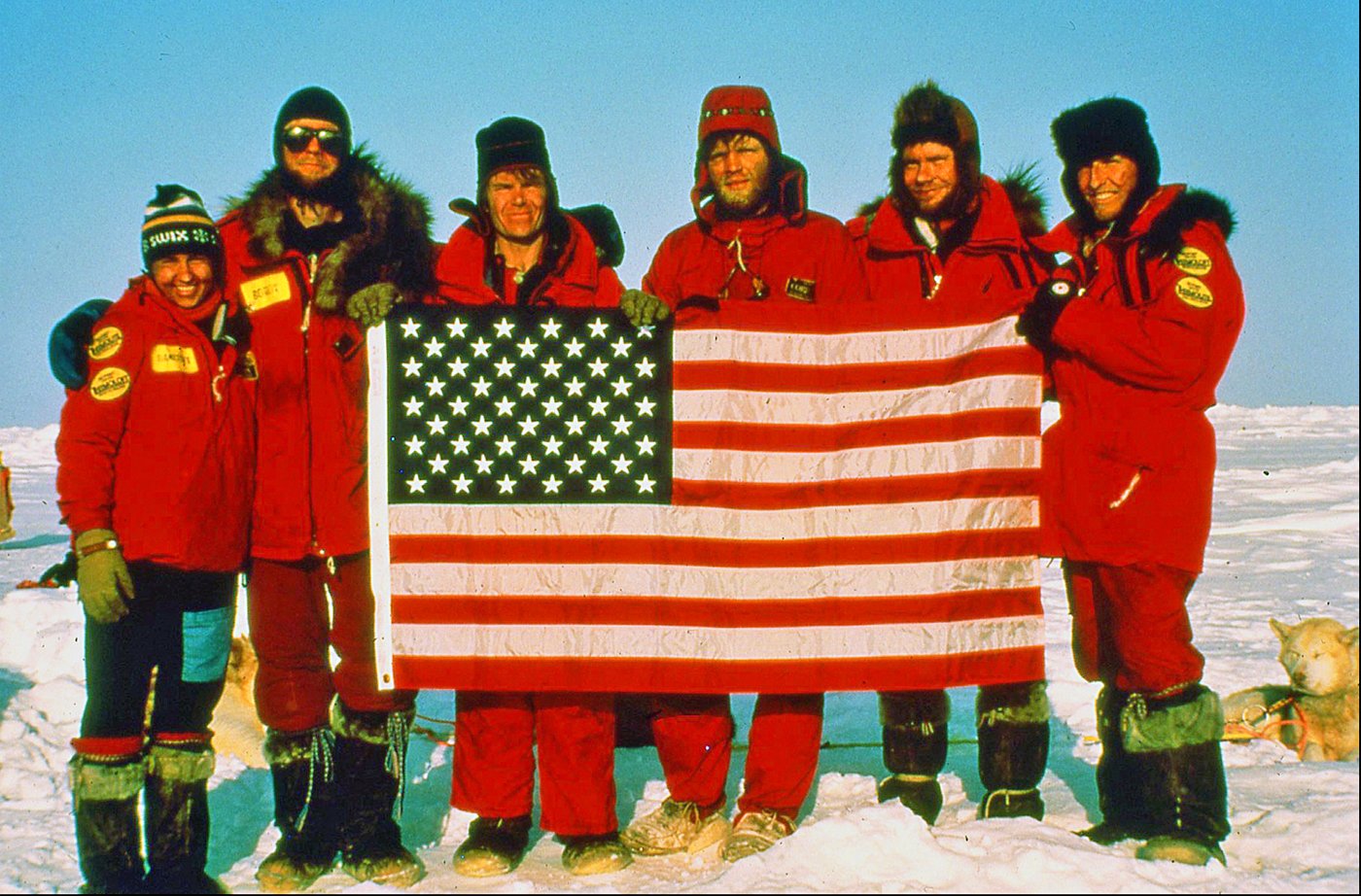 Will Steger and Paul Schurke, of Ely, are shown with their team at the North Pole in 1986. That dogsled and ski expedition that replicated elements of Robert Peary’s 1909 expedition that is the subject of a documentary being filmed in Ely. 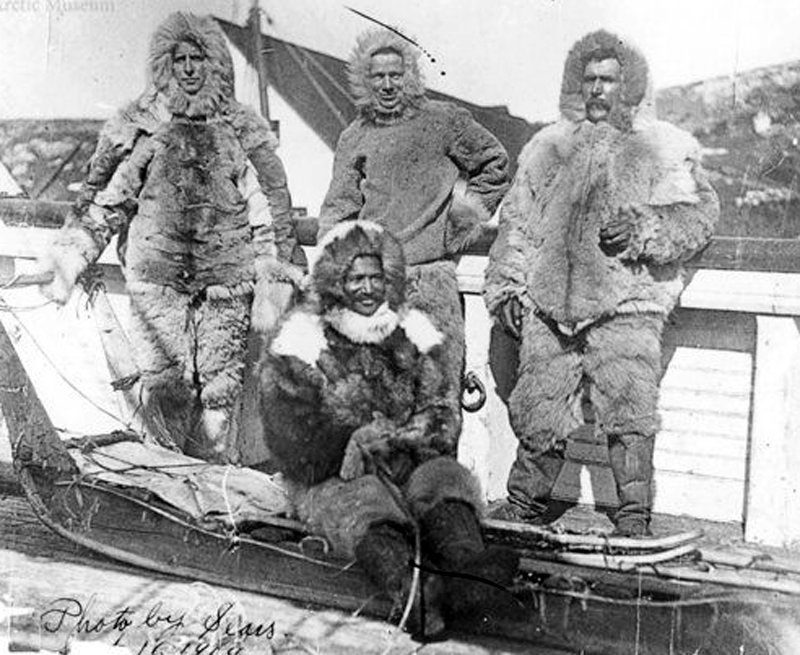 Members of Robert Peary’s polar exploration team and the original dogsled are shown in this 1909 photograph. A crew will be in Ely next week filming a historical documentary on the trek.
Previous Next
Posted Thursday, February 13, 2020 6:00 pm

ELY – The history of polar exploration will be in the spotlight next week in Ely, as a film company comes to town to shoot scenes for a upcoming documentary on Robert Peary’s 1909 dogsled expedition to the North Pole.
The crew will be basing its operations out of Wintergreen Dogsled Lodge, located on White Iron Lake, according to Wintergreen owner Paul Schurke.
Actors, including Wintergreen guides, will be dressed in period costumes, complete with fur parkas, posing as members of the team. “Our Canadian Inuit sled dogs, the same breed used on Peary’s expedition, will pull an exact replica of his 12-foot komatik dogsled laden with furs and supplies,” said Schurke.
The film tells the story of the Ernestina Morrissey, a historic Arctic sailing ship associated with numerous early expeditions. “This ship was skippered by Peary’s team member Robert Bartlett,” Schurke said. “For the Ely shoot, re-enactors will play the roles of Peary and Bartlett as well as Peary’s Polar Inuit companions and his career-long expedition colleague, black-American Matthew Henson.”
Henson’s role will be played by Marcus Landrum who is among the craftsmen, along with Peter Quinlan and Bruce Kleinhammer, of KidZibits Exhibit Design in Minneapolis, that created the replica Peary sled featured in the film.
“The Peary-MacMillan Museum at Bowdoin College in Maine, which houses the original sled, has provided technical assistance with the reproduction,” Schurke said. “Landrum said he’s excited to bring his family up for the filming since February is Black History Month and the event provides his daughter, Saylor, a chance to learn more about Matthew Henson’s key role in America’s exploration legacy.”
Film producer/director Richardo Lopes with Voyage Digital Media and NMHS has produced numerous television commercials, documentary films, off-Broadway plays and the foreign policy series “Great Decisions” for PBS. His other current documentary project is on the 2009 US Airways flight that Capt. Sullenberger glided without engine power to an emergency landing on the Hudson River.
Schurke said he hosts film crews every season. “This project certainly ranks among the most unique and it will be a personal time-warp for me,” he said. “The 1986 dogsled and ski expedition that Will Steger and I led to the North Pole replicated elements of Peary’s expedition but we didn’t do it with period costumes and sleds. We weren’t wearing caribou parkas,” he said. Rather, they were wearing anoraks and footwear designed locally by Susan Schurke and Patti Steger that led to Ely’s iconic apparel manufacturing businesses, Steger Mukluks and Wintergreen Northern Wear.
Schurke said he is hopeful the film’s replica Peary sled, the only one known to exist, will find a home in Ely. “That could be at Ely’s proposed Minnesota Canoe Museum (MCM),” he said. “Erik Simula, who’s heading that initiative and who may serve as a re-enactor in this film, proposes expanding the MCM concept to include Ely’s dog sledding legacy as well. That is especially appropriate this winter as Ely will be celebrating 50 years of dogsled racing among events at the WolfTrack Classic Race next week,” he said.
Schurke said his one concern is how his Inuit dogs will do harnessed in an Arctic fan hitch, in which they’ll be splayed out from the sled on long ropes. “Here in the boreal forest, they’ve always been harnessed two-by-two in the tandem hitch so we’ll see how they respond to a fan configuration. It could be a bit of chaos.”
He also wondered how they’d recreate scenes of massive Arctic pressure ice on the flat surface of White Iron Lake. “The city of Ely’s Public Works department suggested an option. Given the season’s heavy snowpack, the city’s snow dump site east of Ely on Highway 21 is banked with walls of snow 12 feet high. I think it will be an ideal backdrop for part of the film shoot,” he said. “It looks remarkably like the walls of ice we had to negotiate with our one-ton sled loads on our 1986 expedition.”
The documentary film is being co-produced with the non-profit National Maritime History Society (NMHS) of Peekskill, New York, and made possible by grant funding from Marguerite and Gerry Lenfest and the H. F. Lenfest Fund from The Philadelphia Foundation.