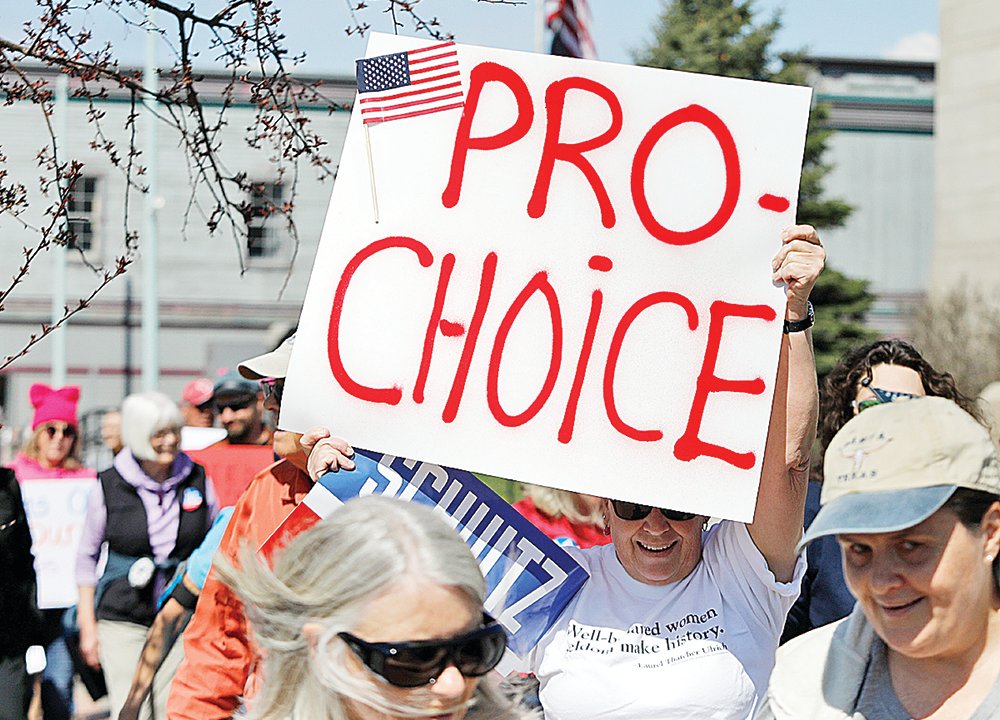 Ely-area pro-choice advocates joined thousands of marchers in hundreds of cities across the United States last Saturday for a “Bans Off Our Bodies” rally.
K. Vandervort

Ely-area pro-choice advocates joined thousands of marchers in hundreds of cities across the United States last Saturday for a “Bans Off Our Bodies” rally.
K. Vandervort
Previous Next
Posted Wednesday, May 18, 2022 9:25 pm

ELY- Nearly 100 pro-choice advocates here joined thousands of marchers in hundreds of cities across the nation for a “Bans Off Our Bodies” rally expressing concern and even outrage that the U.S. Supreme Court could soon scrap the constitutional right to abortion.
Local advocates of abortion rights walked down Chapman Street from Central Avenue on Saturday morning, gathering in Whiteside Park for a rally then walking back downtown on Sheridan Street.
A leaked draft opinion considered by the court’s conservative majority that would overturn the Roe V. Wade ruling spurred demonstrations across the county. The privacy right has endured in this country for nearly 50 years and many fear about what that could mean for women’s reproductive choices.
Local political activist Carol Orban told the crowd, “I feel for all the women in those states who aren’t going to be able to get an abortion. What we need to do in Minnesota is not take abortion rights for granted.”
She urged those in the crowd to vote this year. “We need to work to keep Democrats in office and to take over the Minnesota Senate,” Orban added. “We also need to make sure that all of our Minnesota-wide officials stay in office. Think about Scott Jensen as our governor.”
The crowd shouted in unison, “No!”
Orban continued, “Think about Pete Stauber remaining in Congress.” The crowd replied in unison, “Booo!”
She praised State Rep. Rob Ecklund (DFL), who is pro-choice.
“Keith Ellison, our Attorney General, has been working for justice his whole term and we need him to be re-elected,” Orban said.
In referencing the Secretary of State office, “Imagine one of those crazy Republicans in charge of our elections.”
Pro-choice advocates implored the crowd to sign up to help with the upcoming elections. “We need all of you to help with this election,” Orban said.
During the brief rally in the park, several vehicles driving by honked in apparent support. A couple of people in vehicles also yelled expletives at the peaceful rally.