REGIONAL- A nationwide show of support for the U.S. Postal Service had a local touch Saturday, as demonstrators stood and waved signs in front of post offices in Cook, Tower, and Ely.“Save the … 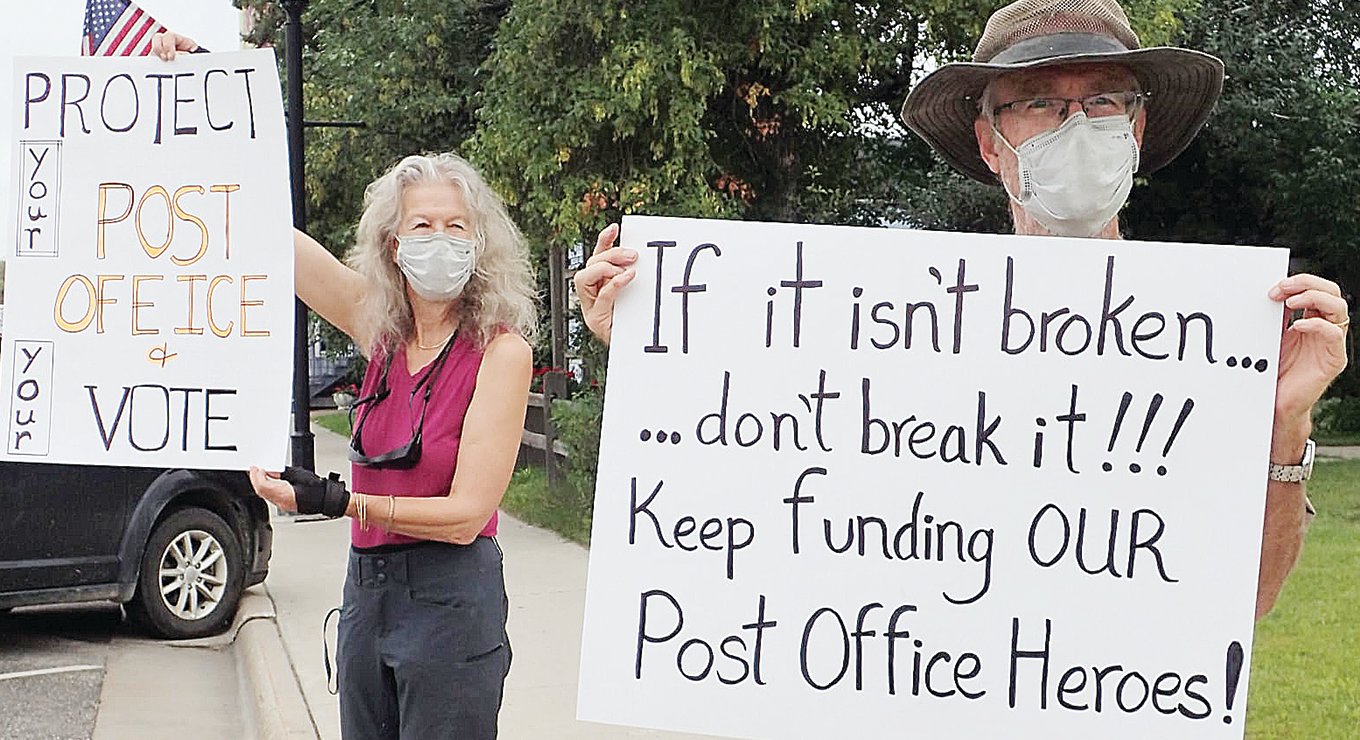 REGIONAL- A nationwide show of support for the U.S. Postal Service had a local touch Saturday, as demonstrators stood and waved signs in front of post offices in Cook, Tower, and Ely.
“Save the Post Office” events were staged in more than 800 communities across the country, sparked by recent moves by the Trump administration that many believe imperil the ability of the postal service to fulfill its mission. MoveOn, a national progressive policy advocacy organization, partnered with about 100 local organizations for the event. Northern Progressives, a regional group with about 300 members in the area from Orr to Ely, and the North of the Divide DFL Network were local sponsors.
“There was a national call to come out to the local post office and show your love,” volunteer Val Myntti said. “All American citizens, both Democrat and Republican, love their post office.”
The biggest turnout was in Cook, where 18 people turned out, according to volunteer Leah Rogne.
“People were very friendly,” she said. “People honked and gave thumbs up as they drove by. I didn’t see a single negative indication from people passing by.”
The group picked up additional support from someone who came out of the post office during the demonstration.
“She asked what we were up to,” Rogne said. “She said, ‘Well, I don’t have a sign,’ so I said, ‘Why don’t you hold up your mail,’ so she did and she stood with us.”
The demonstration even moved beyond the post office.
“Several of us moved up to Hwy. 53 to catch the weekend summer traffic,” volunteer Keith Steva said. “We waved our American flags, held up our posters, and waved at travelers.”
Myntti was one of three volunteers who stood in front of the post office in Tower.
“I live on Eagles Nest Lake, and that’s my little post office,” she said. “We’ve loved that post office since my great-grandparents arrived from Finland in St. Louis County a long time ago.”
Myntti said there was a steady stream of traffic and a variety of responses.
“There were people waving and honking, there were others who smiled, and there were others who didn’t understand why we were there,” she said. “We had people stop and park and ask us if there was a chance that the Tower post office was closing, and we said no. We just want to keep the funding robust and make sure the hours aren’t limited. There’s some talk of cutting the funding and hours.”
Two police officers stopped and offered their encouragement as well, Myntti said.
“We were there for an hour, and we could have stayed longer,” Myntti said.
Vital services
Postal service has become increasingly important during the COVID-19 pandemic, particularly to elderly customers, Myntti said.
“Many elderly people are relying on the post office to get their food, their basic necessities, and their medicine, and their Social Security checks,” she said. “We’re dependent on the post office for basic household goods.”
Myntti acknowledged that she was concerned about recent moves by new Postmaster General Louis DeJoy that could compromise service.
“(He) has treated the post office as a profit center, which it was never meant to be by the Constitution,” she said. “He is cutting hours, he’s cutting overtime hours, he’s potentially going to close branches in less profitable areas. He’s taking out post boxes and removing sorting machines. So, right before an election during a pandemic where people will feel safer to vote by mail, it’s just very bad optics to show that they’re defunding or tightening up the post office by cutting hours as well as services.”
However, Myntti also emphasized that the postal service should be a nonpartisan issue, and that problems and threats have been longstanding.
“Let’s not make any mistake, this has been going on for the last 20 years. This isn’t just new under President Trump,” she said. “It’s ridiculous that when I mail a letter across the street in Ely that it has to go to Minneapolis-St. Paul to be processed before it can come back. That’s been going on for years.”
Budget issues facing the post office stem from the fact that it’s the only agency that has to pre-fund its pension program, Myntti said.
“That is what years ago put the postal service on unsound financial footing,” she said. “It wasn’t because of mismanagement. The post office does just fine just charging its rates for the service and its done well.”
Myntti said she was glad to see people get engaged with Saturday’s demonstration.
“We’re citizens and we can’t just sit back,” she said. “It’s the citizens who need to demand our rights and also understand all of our responsibilities.”