TOWER – Anyone who’s ever stepped foot in Tower’s iconic bar on the east end of Main Street most likely left with a belly full of good food and fond memories of Marilyn on the wall, … 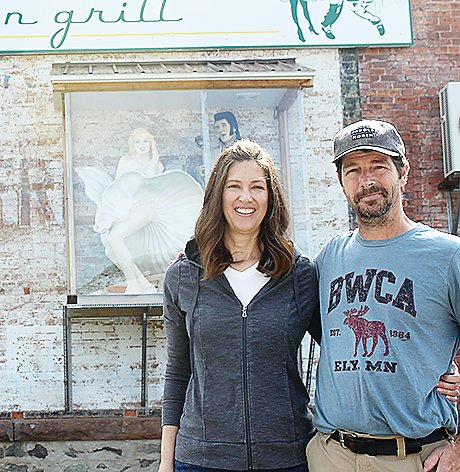 Dan and Greta Burandt outside the Good Ol’ Days Bar and Grill in Tower. The couple took over ownership of the popular establishment last month.
R. Brophy 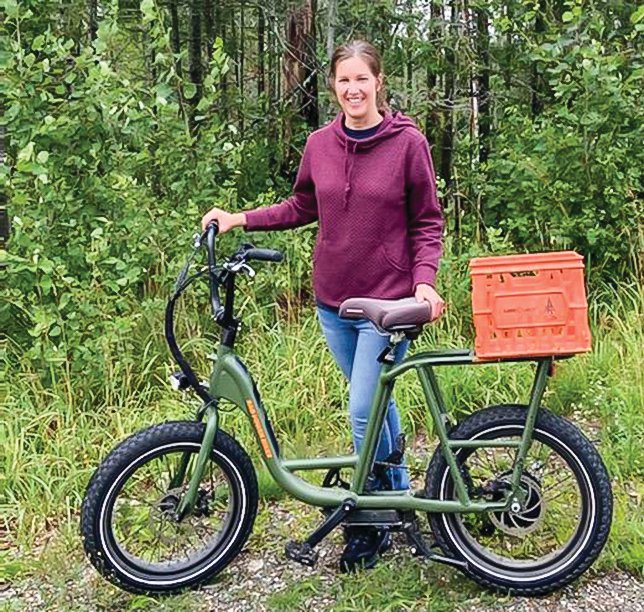 Greta Burandt with her e-bike, something that she and Dan plan to have available for rental as part of their new business venture centered on Good Ol’ Days.
submitted
Previous Next
Posted Wednesday, August 3, 2022 7:19 pm

TOWER – Anyone who’s ever stepped foot in Tower’s iconic bar on the east end of Main Street most likely left with a belly full of good food and fond memories of Marilyn on the wall, Elvis in the corner, Hamm’s beers signs adorning every wall and the model train that makes its way around a track perched just below the beautiful pressed-tin ceiling. This has been the scene at Good Ol’ Days for the 18 years that it was owned and run by Randy and Carol Semo, but time marches on, and it’s time for someone new to captain this ship.
As of July 1, a pair of high school sweethearts, Greta and Dan Burandt are the new owners of the popular bar and restaurant along with the adjoining laundromat and upstairs apartments. The Burandts moved to the area from Shakopee after their two children were grown. They now call their place on Eagles Nest Lake One home and couldn’t be happier to be embarking on a new adventure in the North Country.
While bar ownership is a relatively new experience for the couple, they have both worked firsthand with the public: she as a casino floor supervisor, and he as a dealer in Reno. Dan mentioned that in his experience he found that the “regulars become like family,” and he’s optimistic that the same will be true in this new endeavor.
The burning question many might have about this change in ownership, is “what’s going to change?”
Much will stay the same – the train is not going anywhere, and Dan says he has a passion for beer lights, so if anything, the collection already in place will get some new additions. Dan also pointed out that while he loves Marilyn, it stands to reason that what were considered Randy’s “Good Ol’ Days” predated his own.
“My good ol’ days were more the 70s and 80s,” he explained. “I might have to add Eddie Van Halen alongside of Marilyn.”
Beyond décor, and a complete redo of the kitchen that will enable Dan to make diner-style flat fry-top “smash burgers,” the most significant change is that Greta and Dan will be adding an additional business to the entire enterprise. In fact, that was one reason why they bought the place to begin with. The Burandts are planning to launch Tower E-Bikes, rental bikes that will be available right at Good Ol’ Days.
Tower E-Bikes
The E-Bike is a trail-legal power-assisted bike that makes pedaling up hills a bit less arduous and opens the sport to more than the most athletic trail enthusiasts. The couple first discovered the beauty of E-Bikes when they tried them out at Lake Itasca State Park. They knew immediately they wanted their own, and it wasn’t long after that they decided they wanted to share their newfound passion with the world.
Greta explained that once they knew they wanted to open an E-Bike rental service, they needed to find a location. In the year they were searching for the perfect location along the Mesabi Trail, two properties came up for sale and sold before they had a chance at them. “When Good Ol’ Days came up for sale, we knew this was the place,” Greta said. She explained that timing-wise, they thought the transaction would be complete prior to smack dab in the middle of tourist season, and they would have an opportunity to ease into things, but as it turned out, they took ownership on what is likely the busiest weekend of the entire summer. Dan added, “It would’ve been impossible to do this without Randy and Carol’s help. They’ve been invaluable, and he’s a real-life MacGyver!”
Busy summer
In addition to having Randy and Carol’s help and blessing as the couple moves forward, they’re grateful to have pretty much all of the 10-person staff staying on. Greta said that once the busy season calms down, they’ll likely be able to host a sort of grand reopening.
“Maybe late fall we’ll be able to put our official stamp on it,” she said.
For now, the couple is white-knuckling through the busy season working 12-18-hour days, seven days a week and learning as they go while also getting everything geared up for the launch of the new E-Bike venture. They’re optimistic that their location along the Mesabi Trail and on Tower’s main drag will make them the one-stop shop for people looking to have a good time either visiting with friends inside or traveling down the trail.
Greta and Dan said that they’re most excited about meeting lots of new people, and with businesses that appeal to people of all preferences that should be no problem. They’ve found the initial response from the community to be “positive and welcoming” and from the looks of it, the Burandt’s will be forging some Good Ol’ Days of their own.