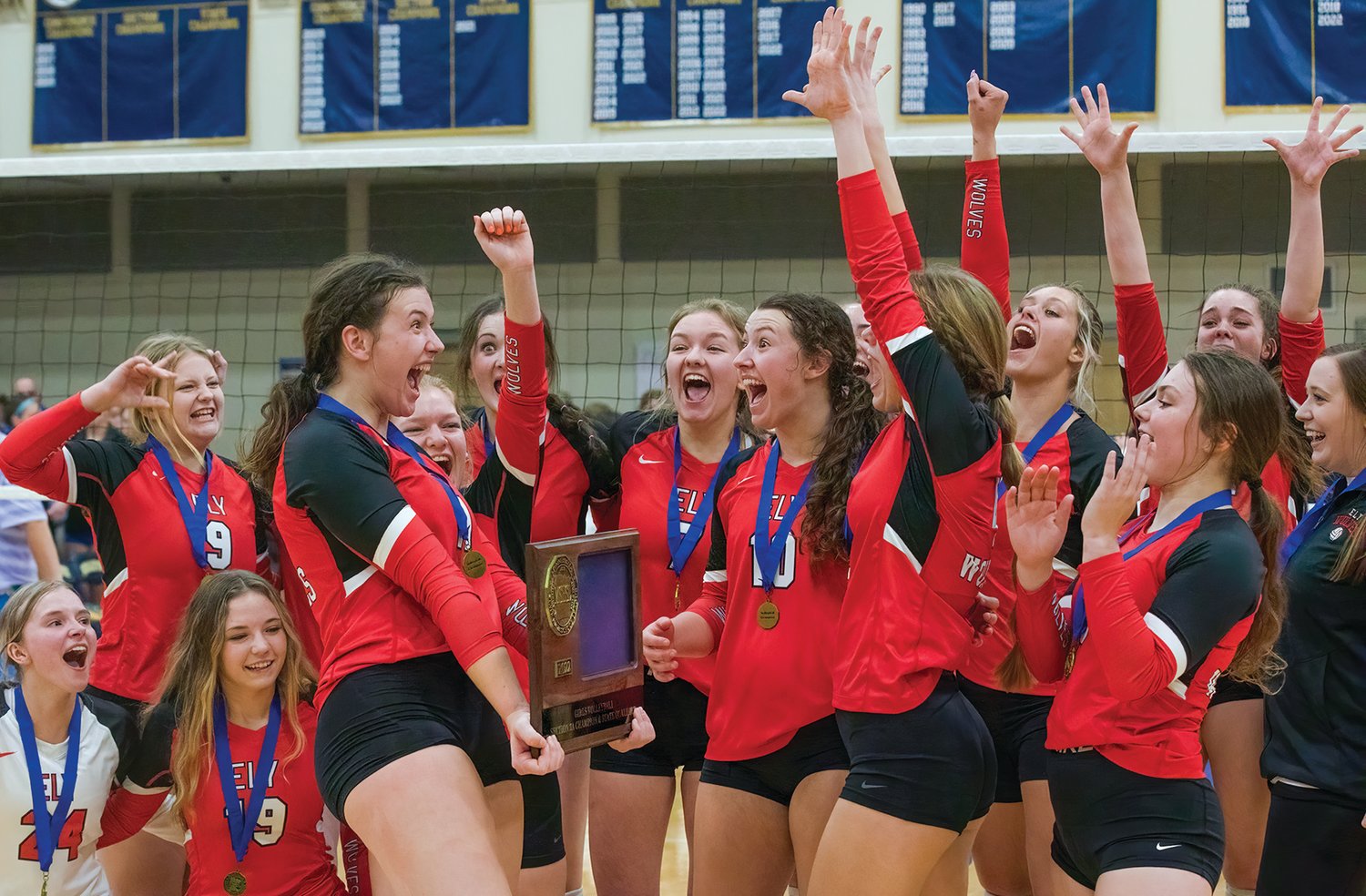 Members of the Ely volleyball team express their joy after winning the Section 7A title.
D. Colburn 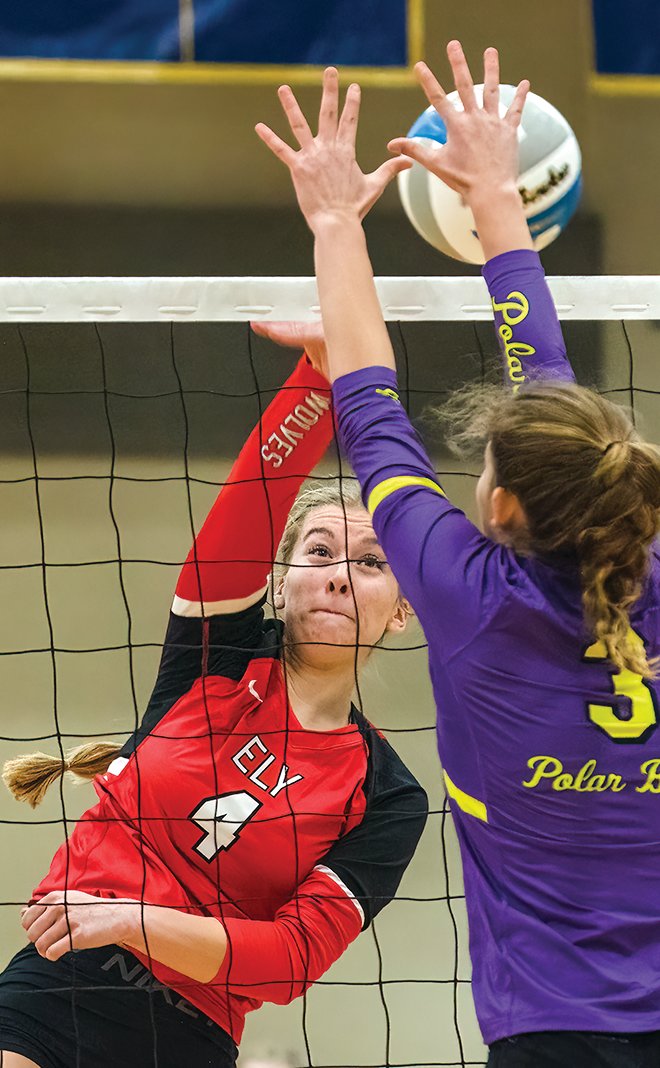 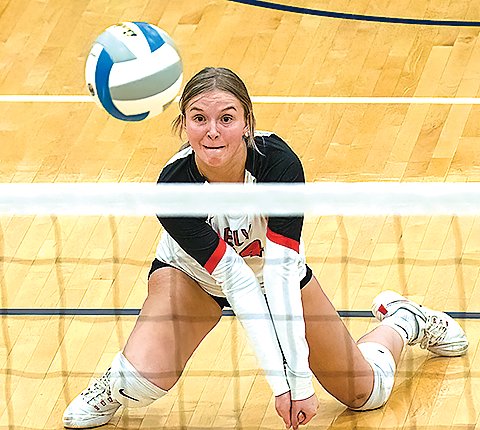 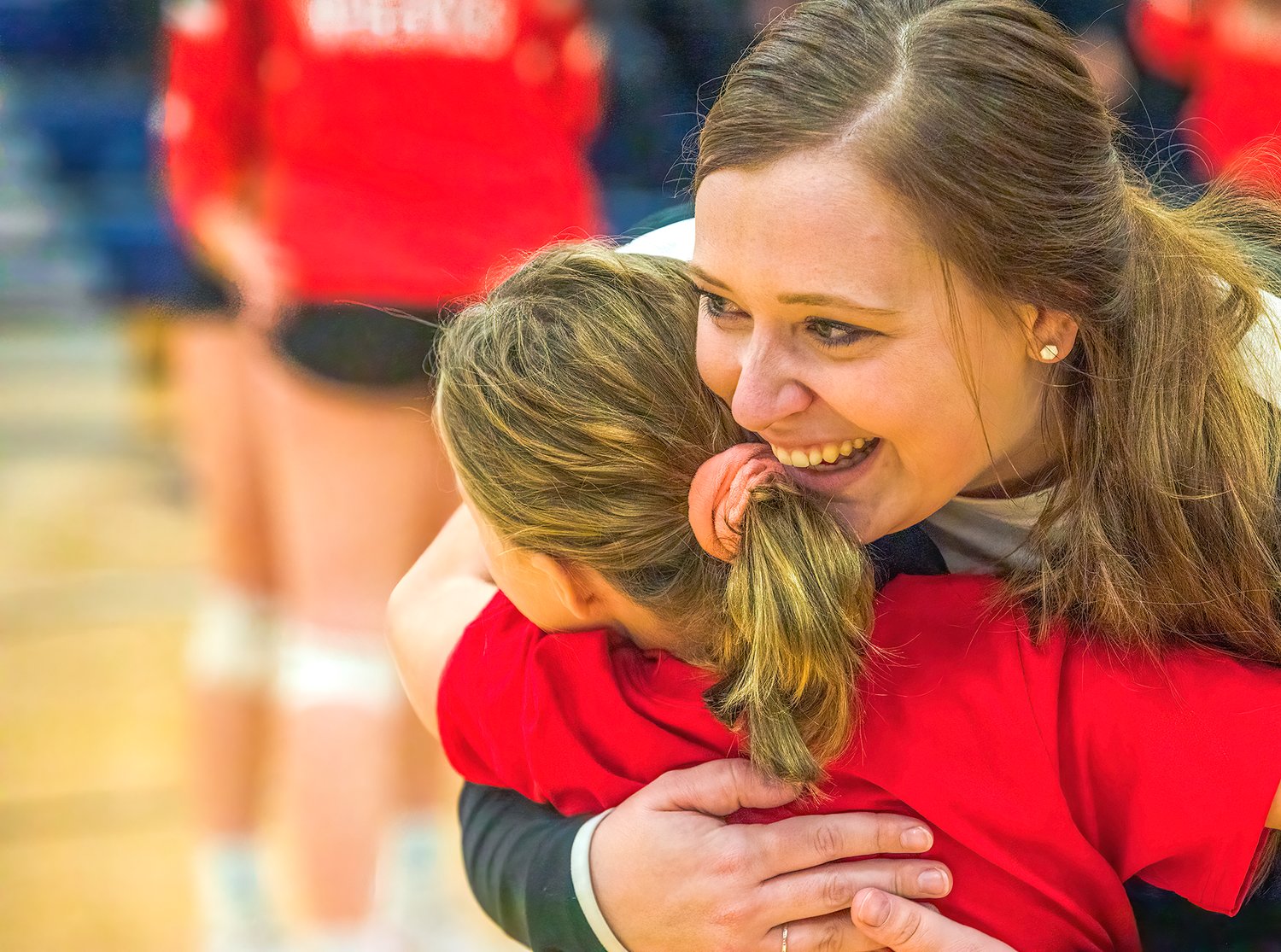 HERMANTOWN- An epic battle for the Section 7A volleyball championship at Hermantown High School on Saturday turned into a monumental rout as the Ely Timberwolves dominated the final two games and cashed in on a trip to the state tournament with a 3-1 victory over Floodwood.
The Polar Bears and Wolves were dead even at 4-4 in the third game, with Ely winning a hotly contested first set 25-22 and Floodwood roaring back to win the second 25-22.
With Ely’s Lilli Rechichi serving at 4-4 in the third, the teams engaged in the longest and most exciting rally of the match, with blistering kills, impossible digs, and dives to the floor for incredible saves.
A huge kill shot by Ely’s Hannah Penke ended the point, and effectively ended any hope Floodwood had of upsetting the undefeated Timberwolves. Ely flat out dominated Floodwood from there, putting together a crushing 16-2 run with stellar play at the net from Rachel Coughlin, Kate Couglin, Madeline Kallberg and Penke as they took the third set 25-10.
The fourth set wasn’t much better for the hapless Polar Bears, as Ely bolted to a 9-2 lead and kept pouring it on to win 25-13 and claim the championship.
This match had all the promise of being a scorcher in the first set with 11 ties and seven lead changes before Ely pulled ahead late on kills by Madeline Kallberg and Rechichi for the win. Floodwood responded with a 4-0 spurt to start the second set and never trailed in the 25-22 win.
Floodwood’s Kenzie Kiminski was on fire the first two sets, hammering ten kills, and before the third set Ely Head Coach Megan Wognum knew she had to switch things up.
“We struggled with blocking,” she said, “We made some adjustments and we moved out blocks inside a little bit more so that they couldn’t finish their kills.”
The strategy worked to perfection as Ely’s blockers turned back shot after shot the rest of the way. Kiminiski nearly disappeared in the final two sets, collecting just two more kills.
On the Timberwolves’ side of the net, Penke again was the big gun, nailing kills down the line and in the corners for 18 winners.
“Hannah has the really cool ability to change our team dynamic,” Wognum said. “She brings more than just skill. She brings passion, she brings endurance, she brings everything that we need as a team to pull together this year. She’s going to be really good when she plays in college.”
Penke wasn’t the only member of the team with a big night. Senior Kate Coughlin notched nine kills and 23 digs, while her sister Rachel added ten kills, 18 digs, and seven blocks. Senior Madeline Kallberg added six kills, 25 assists, 13 digs, six blocks, and four aces. Meanwhile, Lilli Rechichi tallied six kills, nine digs, and four blocks, while Courtney Eilrich added 12 digs.
While the Wolves savored the win this weekend, Wognum already had the Wolves pointing toward the next big prize.
“It’s almost like we start a whole new season,” she said. “I said that coming into the playoffs after our regular season was successful, and now we’re moving into a new season which is the state tournament.”
In the state tournament, the top five teams are seeded, while Ely and the other two teams were assigned their opponents by random draw.
Ely drew one of the toughest matchups for Thursday’s opening round, defending Class A champion and second-seeded Mayer Lutheran. The Crusaders also won state championships in 2016 and 2017, and their 26-5 season record includes nine wins over Class AAA and Class AAAA teams. Ely was banking on its scrappy play, team chemistry, and its record as the only undefeated team remaining in Minnesota to pull off the upset. “Mayer Lutheran has a great reputation for being competitive. We have done our homework and we are going to make sure we play our best game yet,” said Wognum.
The tournament was scheduled to end with the championship match set for Saturday. Check the Timberjay’s Facebook page and timberjay.com for tournament updates, and a full tourney recap will be published in the Nov. 18 edition.