SUPERIOR NATIONAL FOREST— Mother Nature helped firefighters get the upper hand on the Bezhik Fire last week, but not before the blaze impacted some private property owners in the area. While … 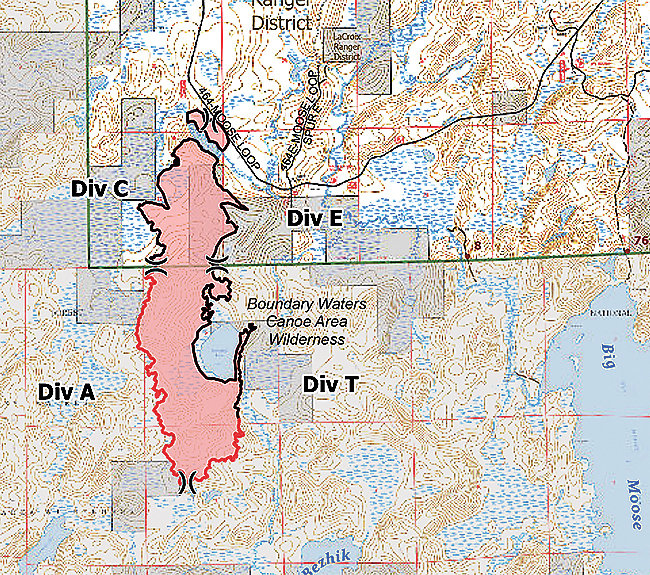 SUPERIOR NATIONAL FOREST— Mother Nature helped firefighters get the upper hand on the Bezhik Fire last week, but not before the blaze impacted some private property owners in the area. While the blaze began near Bezhik Lake, within the Boundary Waters Canoe Area Wilderness, dry air and southerly winds last Tuesday, May 18, pushed the fire outside the wilderness boundary and toward of cluster of private inholdings located along the Moose Loop Road, off the Echo Trail.
“It had a pretty good head of steam going on Tuesday afternoon,” said Tim Engrav, a public information officer with the U.S. Forest Service’s LaCroix office in Cook. “It really had a lot of potential.”
While cooler weather during the day on Wednesday, and nearly an inch of rain that following evening, quieted the fire enough for firefighters to have it fully contained as of Saturday, the fire’s big run the day before destroyed at least one seasonal cabin and several outbuildings, according to Engrav.
“It doesn’t look too nice,” said Tom Kintner, of Tower, describing the property he and his wife own off the Moose Loop Road that was in the path of the fire. Forest Service firefighters managed to save their cabin and outhouse, said Kintner, but other buildings, including the sauna, a woodshed, a couple trailers and a generator, were all lost from the fire. “The sheriff escorted us in and out,” said Kintner, in order for them to assess the property damage. “I got a few trees that were singed pretty bad, too,” said Kintner. He said he has friends and relatives who have already offered to help him rebuild. “My wife said I have to build the sauna back,” he said.
Fire wrap-up
With the fire contained, the administrative team from the Minnesota Incident Command Center, or MNIC, transferred command back to the local fire officials. Final mapping of the fire put the total acreage at 782 acres, about half the size of initial estimates. Fire crews were continuing to extinguish hot spots and monitor the perimeter to prevent any new fire activity.
All told, 89 fire personnel were deployed to the blaze.