ELY – Blake and Jennifer Freking order 1,500 pairs of booties every year. They have just two daughters who have long outgrown their need for little footwear. But, add 60-plus canines the family … 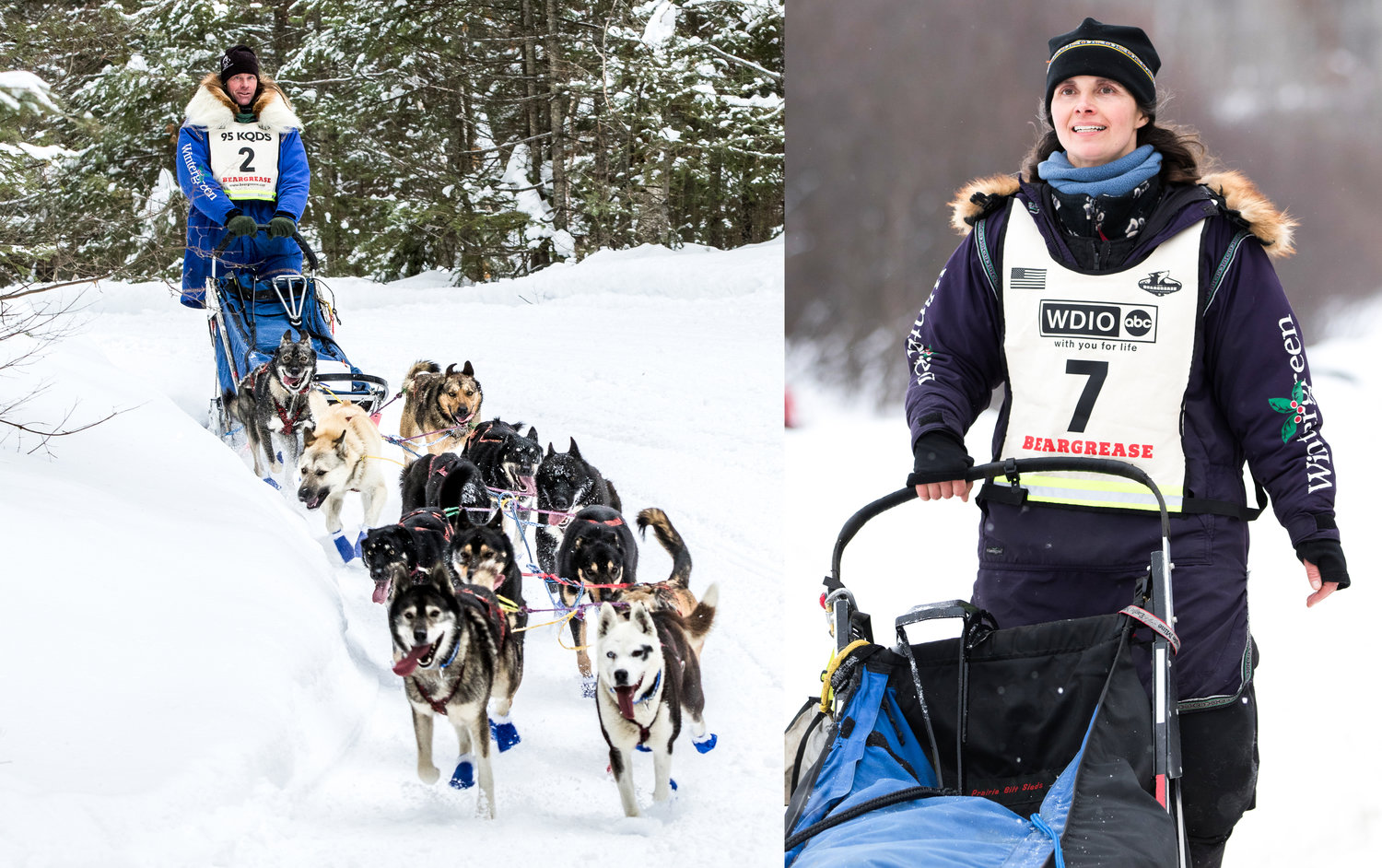 ELY – Blake and Jennifer Freking order 1,500 pairs of booties every year. They have just two daughters who have long outgrown their need for little footwear. But, add 60-plus canines the family raises for sled racing, and that many booties doesn’t seem like enough.
The Frekings are truly a sled dog racing family. They own Manitou Crossing Kennels, located near Isabella, where they raise and train Siberian Huskies for long distance sled dog races. They are veterans of the Beargrease Marathon, Iditarod, UP 200, Hudson Bay Quest and other races.
Blake and Jennifer will be “competing” against each other this weekend in the WolfTrack Classic here but they admit that the 50-mile run in the Superior National Forest is more like training than racing. They visited a recent Tuesday Group gathering to tell their story.
For Blake, his love of dogs started on his family’s farm in southwest Minnesota. “We had dogs around, but I always had an affinity for sled dogs,” he said. In grade school, he continually read a book, “Winterdance,” by Gary Paulson, that fueled his passion.
At age 17, Blake said he had the idea of having a Siberian Husky pull him on skis. “I learned about skijoring and added another dog to the team, then another, then another,” he said
In 1998, Blake met Jennifer when he moved to Alaska to handle the sled dog team for Earl and Natalie Norris in Willow, Alaska. Jennifer was also staying with the couple and preparing to run the Junior Iditarod. Blake ran the Norrises’ Anadyr Siberian Huskies in the 2000 Iditarod.
Since then, sled dogs and sled dog racing have been the focus of their lives together.
In 2002, Blake and Jennifer established Manitou Crossing Kennels where they raise and train their sled dogs with their daughters, Elena and Nicole.
Blake and his Manitou Crossing Siberians won the 400-mile Beargrease Sled Dog Marathon in 2004. In 2005, they finished 11th in the Yukon Quest, a 1,000-mile marathon. In 2006, Blake finished second in the John Beargrease Marathon and fifth in the Can-Am 250, held in Maine.
“I started mushing when I was eight years old and I always had a love of sled dogs, winter, and the outdoors,” Jennifer said.
She finished 50th of 80 teams in the 2008 Iditarod, “nine seconds ahead of Blake.” Jennifer was also awarded the Most Inspirational Musher Award, an honor nominated and voted on by the other Iditarod competitors after overcoming serious setbacks before and during the race.
“Raising sled dogs is a lifestyle and a passion,” Jennifer said. “Some may even call it an addiction. I would say it is a healthier addiction than a lot of them. It makes us feel grounded when we spend time with our dogs.”
Jennifer’s interest in caring for their dogs became her livelihood as well when she graduated from the University of Minnesota College of Veterinary Medicine in 2004. Since then, she has practiced large and small animal medicine at the Ely Veterinary Clinic.
“For those who have ever been to the start of a sled dog race, you know that motivation is not a problem for these dogs,” Blake said. “They are pretty fired up at the start, and are that way all year long. We run 3,500 miles a year, generally, and our dogs are always ready to go and give 100 percent. You can try that with your co-workers and see how that works out. That motivation keeps us fired up as well.”
He noted that much of their training goes into teaching the dogs that they can pace themselves. “They don’t have to give a hundred percent all the time. We help them to be happy with running at just 10 miles per hour. Look for racers at the start who are dragging somewhat to slow the dogs and get them into a slower pace.”
Blake and Jennifer started their homestead in the Isabella area by first living in a teepee, then a small cabin, and then built a larger home. They live off-the-grid and produce their own power. “We didn’t really think ahead that far in terms of having kids out there in the bush, but it has worked out very well,” Blake said.
Elena was born in 2010 and Nicole followed in 2012. “Having children with the dogs has been amazing,” he said. “Our socialization program has grown by leaps and bounds since before kids. When we have puppies, especially, when we come home, the kids bail out of the car and climb into the doghouse with the puppies and we don’t see them until we drag them out to feed them and put them to bed.”
Jennifer said their racing dogs are at their best when temperatures are around zero. “Even at 20 degrees, they are fairly hot, especially when we have to put booties on to protect their feet,” she said. “That hinders their ability to cool down.”
The Frekings work hard at building their racing teams. “It starts out when they are puppies. We work with them and bond with them. But we are aware that we are outsiders. Mom is the nucleus of their world,” Blake said.
During those first weeks and months, they slowly interject themselves into their puppies’ world. “Later we do little puppy adventures and introduce them to the big wide world,” he said. “Then we are the ones they look to for familiarity. We also are helping them build confidence. We coax them along, and they realize that when we ask something of them, they can do it. Eventually we’re bounding across the Alaskan range, and they feel invincible.”
A full-grown Siberian husky can consume up to 10,000 calories per day, Jennifer said. “We feed them a very high-performance Kibble with about 37-percent protein and 25-percent fat. Nutrition is critical.”
Blake and Jennifer sometimes wonder if their daughters will stay in the sport of sled dog racing. “I hope they will grow up to be smarter than us,” Jennifer said. “What we want for them is to have a passion for whatever they do.”

WolfTrack 2020
The WolfTrack Classic Sled Dog Race is a mid-distance race with two classes, a six-dog, 30-mile race and an eight-dog, 50-mile race. Both races leave from the Ely Softball Complex on Sunday morning Feb. 23, starting at 9 a.m.
Twelve teams are registered for the eight-dog race and 18 teams are signed up to participate in the six-dog race.
The race runs on the Taconite Trail through the Superior National Forest, a portion of Bear Head State Park, and crosses Bear Head Lake.
The dog team area and spectator area at the start line are full of color, pageantry and a mix of excited, barks, howls and yips mixed with the announcing of the teams coming to the start line. The Ely softball Complex is located on the east side of town off Highway 1.
When the teams are all on the trail, there are spectator opportunities along the racecourse, on the Highway 1 and Highway 21 crossings, both outbound and inbound.
“A wonderful opportunity to see the eight-dog teams in action is the warming shelter in Bear Head State Park, which is positioned as the teams step on land after a potentially challenging lake crossing,” said Race Director Ellen Cashman.
The race finish line is also at the Ely softball complex. “Finish times are dependent on trail conditions and the weather, and we could see teams back in Ely as early as 12:30 p.m.,” Cashman said.
For more information, including biographies of the racers, go to www.wolftrackclassic.com.