REGIONAL- Thunderstorms packing damaging winds of around 60 mph barreled through the North Country on Monday night, leaving snapped off trees, property damage and thousands of homes and businesses … 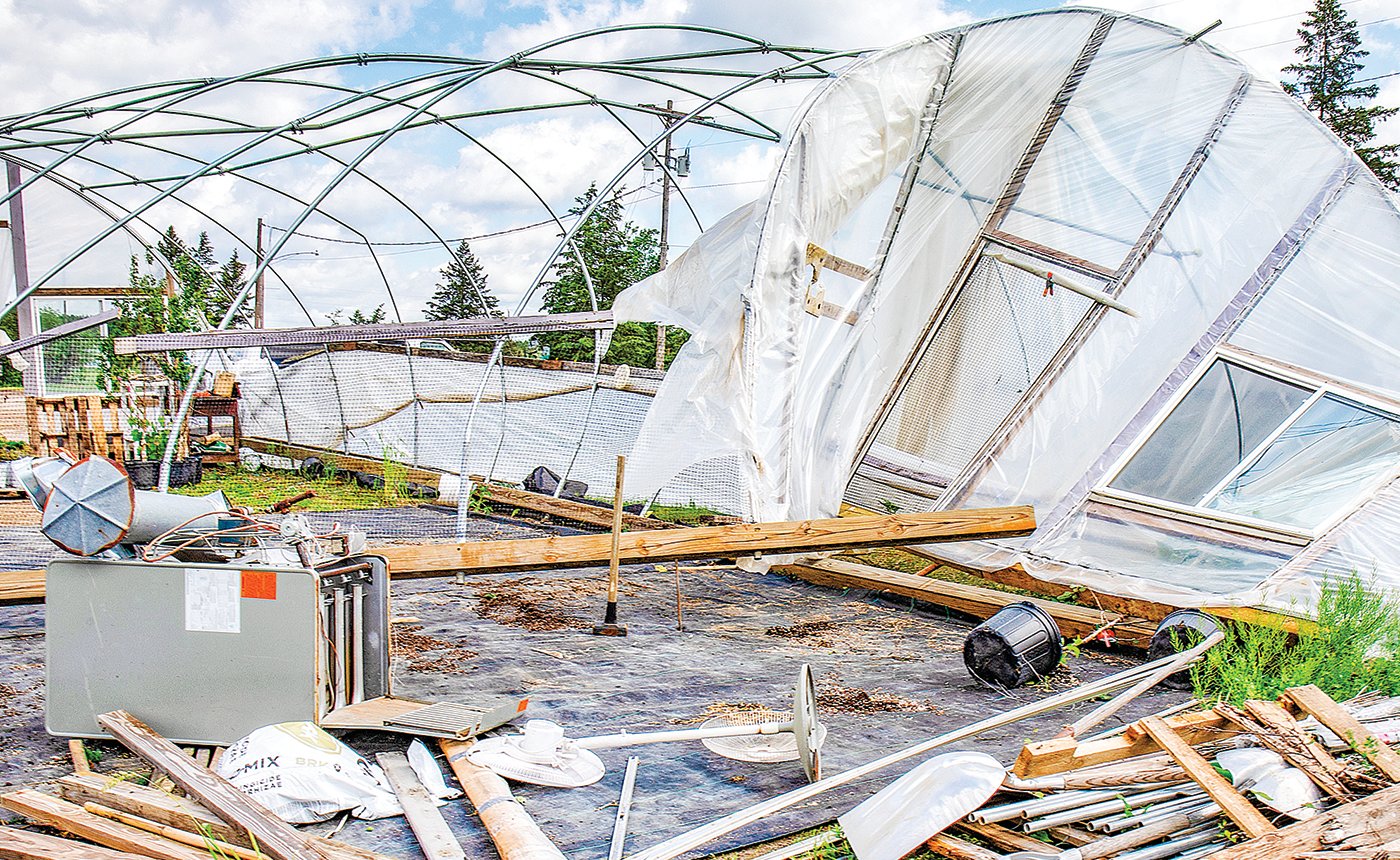 a hoop house was torn to shreds at the Watering Can Greenhouse in Cook
D. Colburn 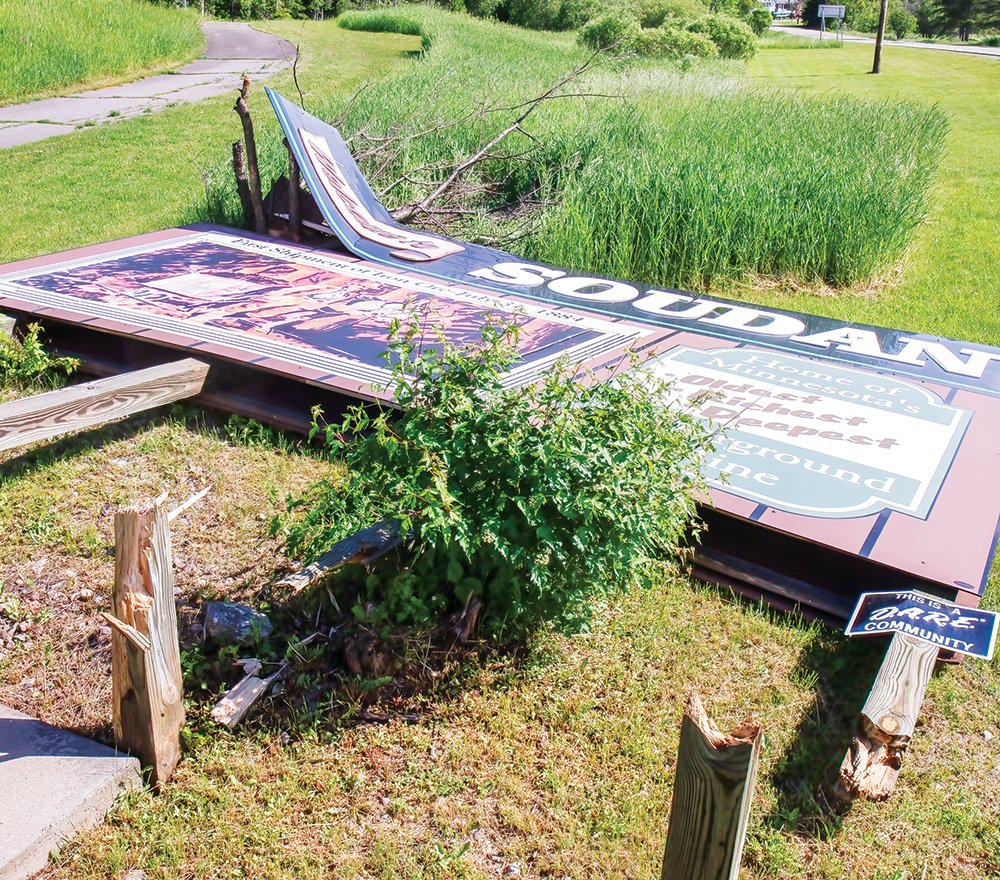 A welcome sign in Soudan was wiped out by the storms that moved though parts of the North Country Monday night.
D. Colburn 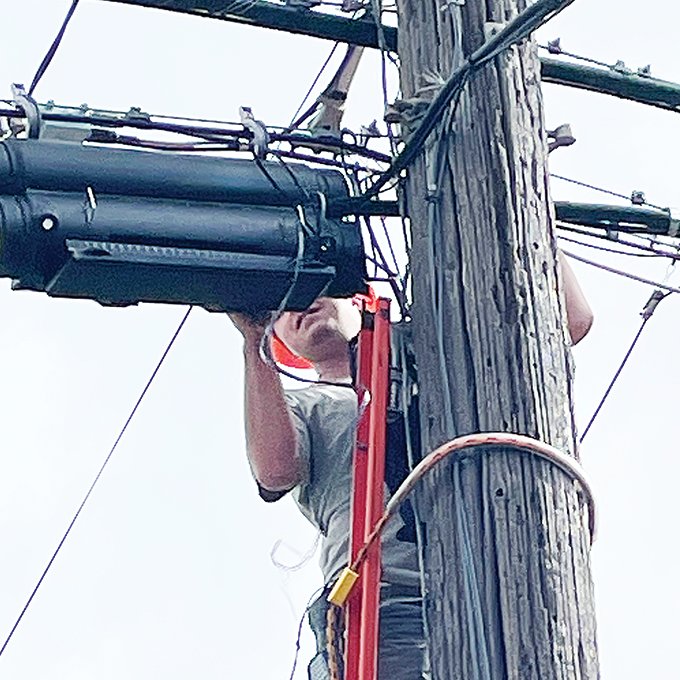 REGIONAL- Thunderstorms packing damaging winds of around 60 mph barreled through the North Country on Monday night, leaving snapped off trees, property damage and thousands of homes and businesses without electricity.
As the storms swept through northeastern Minnesota, the combined number of powerless locations served by Lake Country Power and Minnesota Power across multiple counties grew to almost 28,000. The first reported power outages in the North Country started rolling in just after 9 p.m. and kept on coming as the front pushed eastward.
Lake Country Power reported that about 16,800 of its customers were without power as of 11:30 p.m. Monday, and crews working through the night had reduced that number to around 10,000 by 8:30 a.m. Tuesday. A mid-afternoon update said that 3,600 members in St. Louis County were still without power, with Crane Lake and several areas around Lake Vermilion prominently highlighted on the company’s online outage map. Many of the Lake Vermilion outages were fixed by early Tuesday evening, but increasing winds and crews being idled for mandatory safety rest breaks slowed overnight progress. Fallen trees were also hampering access to some locations, LCP officials said, and they projected it would be Thursday before power was completely restored.
Minnesota Power representatives said they expected to have power restored by Tuesday night to the majority their 11,000 customers who lost service.
Storm damage
From Kabetogama down to Angora and all points east to beyond Ely, tree damage was widespread. Images shared on the Duluth National Weather Service office social media site revealed trees snapped off at mid-trunk and below, with others uprooted entirely, although thankfully few showed tree-damaged structures. Reports of significant tree damage were registered for Cook and Field Township, numerous locations on Lake Vermilion, Clear Lake, Burntside Lake, and Ely.
While straight-line winds exceeding 60 mph at times likely accounted for most of the reported damage, some concentrated areas showed evidence of possible microbursts, such as an area on the north side of Cook.
Beginning in the new Veterans Riverfront Park, with a large tree naturally leaning to the south over the Littlefork River that was snapped off at its base and toppled northward, a narrow trail of heavily damaged trees could be found stretching about a third of a mile to the north-northeast. That path included the Watering Can Garden Shop, where an isolated greenhouse near Vermilion Dr. was totally demolished while the shop and other greenhouses weren’t damaged.
The description of the extensive damage around Ludlow’s Island, Polley’s, and Muskego Point resorts on Lake Vermilion as reported to the NWS by Lisa Wolfe also has elements that could be indicative of a microburst, although there is no way to be certain.
“Lost at least two dozen trees, snapped in half, uprooted, large and small, some trees cracked but still standing, downed trees going all different directions, with others right next to them fine,” she wrote. “Pontoons flipped upside down in water, covered boat slips pretty much destroyed at those locations. Bizarrely, hanging glass solar lights untouched with multiple large trees down just yards away.”
Bizarre was descriptive of the damage to the eight-stall boathouse at Muskego Point Resort. The lakeside façade of the structure with its distinctive messaging appeared to be intact, while nearly all of the structure behind it was completely demolished.
Precipitation
The NWS precipitation map covering the region indicates that estimated rainfall ranged from a quarter inch up to an inch and a half. Unofficial individual reporting to the NWS was generally in the higher end of that range, with amounts of close to two inches reported in Babbitt. There were also scattered reports of pea-sized to quarter-sized hail.
With the Rainy River Basin flooding now in slow but steady retreat, Monday’s rain will temporarily slow that process a bit more as water makes its way into the basin tributaries and streams and on through the basin. However, overall rainfall from Monday’s storm is unlikely to cause a reversal of the downward trend, although NWS officials said that afternoon that Rainy Lake remains vulnerable to a slight rise should the region experience a heavy rainfall.