Impact of winter ticks worsens after warmer summers, according to new study

REGIONAL— For years, biologists who study moose have believed that milder and shorter winters are playing an oversized role in the decline of North America’s largest member of the deer …

Impact of winter ticks worsens after warmer summers, according to new study 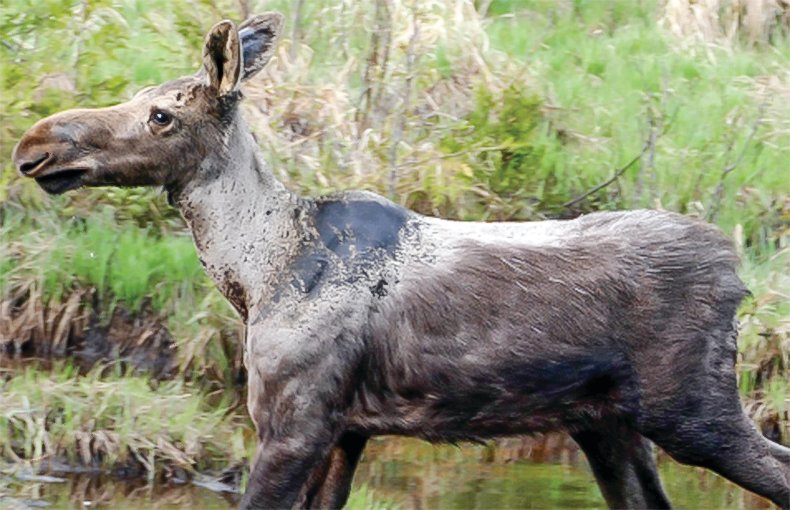 REGIONAL— For years, biologists who study moose have believed that milder and shorter winters are playing an oversized role in the decline of North America’s largest member of the deer family. Yet, a new study based on 20 years of research at Isle Royale, suggests that warmer summers could be as big a problem for moose as mild winters.
While moose in the upper Great Lakes region face a myriad of challenges, from parasitic brain worms to liver flukes, to heavy wolf predation of calves, the impact of winter ticks could be among the most difficult to overcome. Moose are enormous animals with thick coats adapted for the harsh cold of northern winters, which makes them a hospitable home for a species of tick known to scientists as Dermacentor albipictus and as winter ticks or moose ticks to everyone else.
Where tick numbers are high, tens of thousands of them can attach themselves to a single moose. The presence of so many ticks irritates moose, so much so in fact that they often scrape away much of their fur as they try to rid themselves of the pests by rubbing against trees.
This creates further burdens to affected moose. The loss of fur requires them to expend more energy to keep warm in the winter. The loss of blood from so many ticks can cause anemia, further weakening moose. It leaves them more susceptible to predators, primarily wolves, and likely reduces the reproductive potential of female moose as well. If climate change increases the abundance of ticks, as most researchers believe is already happening, life in the more southerly parts of the moose range, like here in northern Minnesota, is likely to get even tougher for moose in the future.
Long-term study
For more than 50 years, researchers with Michigan Technological University, in Houghton, have monitored the wolf and moose populations on Isle Royale and how they interact. Since 2001, they have taken careful note of the amount of hair loss that moose there have experienced due to heavy tick loads. It was that data, combined with temperature records, that have formed the basis for their latest findings, which were published late last month in the journal Frontiers in Ecology and Evolution. The researchers found a strong correlation between average temperatures in July and the extent of the tick burden that moose would face that following winter. Warmer temperatures in summer appeared to promote faster egg development and increased egg survival, leaving more viable ticks on the landscape in the fall when the winter ticks begin their quest for a host.
The study also found a correlation between high tick burdens and predation from the small number of gray wolves on the island, although the correlation wasn’t as pronounced as that involving temperature.
The study does note that summer temperatures have been slower to increase in much of North America as a result of climate change, at least as compared to winter temperatures, where dramatic warming has already been experienced in many places, including northern Minnesota. But the study notes that summer temperatures are expected to increase by anywhere from two-to-eight degrees Celsius over the next 80 years, depending on the actual reductions in carbon emissions achieved over the next few decades.
“If such temperature increases occur, then our results suggest that average hair loss may regularly exceed 50–60 percent, which is indicative of severe tick burdens for moose,” concludes the study. “The ramifications of any such climate related changes in parasite dynamics are likely to be substantial and widespread given that parasites play an important role in shaping the composition, structure, productivity and stability of communities and ecosystems.”
This suggests that the long-term outlook for moose in southern portions of the species’ range remains dire, even as the slower rate of warming in summer may postpone the decline or disappearance of moose in northeastern Minnesota for a few more decades.
Still, milder and shorter winters remain a factor that impacts winter tick abundance and, ultimately, the health of moose populations. Previous studies have documented how shorter winters improve winter tick reproduction and give the cold-sensitive ticks a longer period to find a host.
The one-year tick life cycle begins when female ticks lay their eggs in June, after which they die. The eggs hatch in late summer into the fall and immediately begin searching for a host. While whitetail deer encounter winter ticks, they are usually able to protect themselves through grooming. Moose are less effective at doing so, which is why as many as 100,000 ticks can attach themselves to a single moose when tick populations are high.
When snow and cold temperatures arrive later in the season than in the past, ticks can survive longer into the fall, increasing their chances of finding a host. Tick survival is also dependent on how long snow and cold lingers in late winter. The ticks eventually drop off their hosts, typically in late April. If they fall on snow-covered ground, the females typically won’t survive to lay eggs. But when snow disappears earlier, tick survival improves, meaning there will be more young ticks seeking hosts later that year.
And, if warmer summers allow more of those eggs to hatch and quicken the pace of development of the larval ticks, it not only increases tick numbers but provides for a longer period for ticks to find a host. All of which adds up to bad news for moose.
It should be noted that the findings of this latest study may not apply the same way outside of Isle Royale. The Lake Superior island, which is a national park, does not have whitetail deer, which carry a host of other parasites, such as brainworm and liver flukes, that can be fatal to moose. That further complicates the survival picture for moose on the mainland.