ELY— Senior pitcher Mason Davis tossed a no-hitter on Monday as the Timberwolves won their seventh straight to improve to 8-3 on the season. Davis fanned 11 Littlefork batters as Ely blanked … 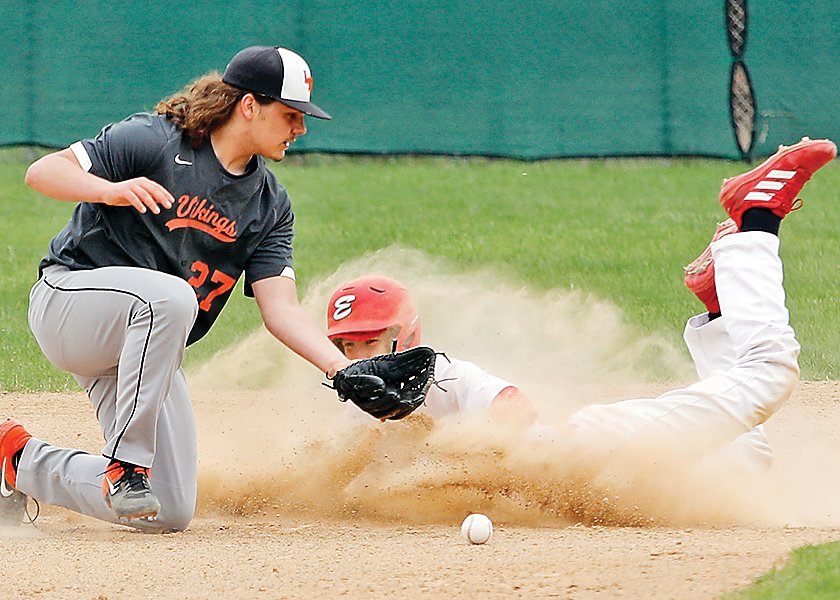 Ely’s Gunnar Hart slides in safe at second during a steal attempt against Littlefork-Big Falls on Monday.
K. Vandervort
Posted Wednesday, May 18, 2022 9:19 pm

ELY— Senior pitcher Mason Davis tossed a no-hitter on Monday as the Timberwolves won their seventh straight to improve to 8-3 on the season. Davis fanned 11 Littlefork batters as Ely blanked the Vikings 11-1.
Davis had plenty of help from his offense, as Ely racked up 13 hits in the contest. Junior Joey Bianco, who tallied three RBIs and three runs scored on three hits, led the way for Ely. Fellow junior Logan Loe added three hits of his own, including two doubles, while scoring twice. Junior Erron Anderson and senior Eddie Prijatel did their part, knocking out two hits and an RBI apiece.
As has been the case for the past couple weeks, solid pitching has helped Ely’s cause.
“I really like our depth,” said Ely Head Coach Frank Ivancich. “We have had four different pitchers throw complete games in the past two weeks, and we have gotten key contributions from 14 guys which allows us to get out and play games.”
The Wolves added two more wins to their streak in last Saturday’s doubleheader in Blackduck, outscoring their opponents in the two contests by a total of 23-2.
Drew Marolt earned win number one from the mound, as he struck out six Red Lake Falls batters and scattered just three hits in the six-inning game to lead the Wolves to an 11-1 win over the Eagles. Freshman shortstop Caid Chittum paced Ely with two hits, two RBIs, and three runs scored.
Anderson tallied two hits and an RBI, while senior fielder Harry Simons added two hits as well.
In the nightcap, junior hurler Gunnar Hart pitched a one-hitter, while striking out four, through four innings of work, as the Wolves routed Blackduck 12-1 in a five inning game.
Davis got the hit parade started with a two-run homer in a four-run second inning. The Wolves blew it wide open with eight runs in the third inning. Chittum, senior Chase Sandberg, and Loe all had hits in the inning. Chittum and Sandberg each picked up two RBIs in the process.
“We had a great week,” said Ivancich. “We have continued to pitch well and play defense.  We have held teams under two runs in most of our games this season.”
Ely relied on solid defense to top Cherry last Friday in Aurora. Simons notched the win for Ely, scattering four hits while fanning five Cherry batters. Cherry did have its chances as Simons struggled at times with control, hitting four batters and walking another three. “But we always seemed to find a way to work out of innings as the defense came up with play after play to hold Cherry at bay,” said Ivancich.
Bianco had a huge day at the plate, going three-for-four with a double and an RBI in Ely’s three-run third inning, which proved the decider. Deegan Richards tallied two hits and scored a run on a third inning single, driven home by Bianco’s double.
Ely was scheduled to host Virginia on Thursday, with a 4:30 p.m. start.
They’ll host the annual Veterans Memorial Showcase Tournament beginning at noon on Friday and running through Saturday evening. On Friday, the Wolves are scheduled to face Carlton at noon and Silver Bay at 7:30 p.m.
They’ll round out the tournament on Saturday, playing Cook County at 7:30 p.m.
A total of nine teams will take part in the weekend’s competition.