The comeback of cranes

A primeval sound has returned with a vengeance to the North Country this year. Sandhill cranes, which had once bordered on extirpation in Minnesota and had been rare for a time throughout their …

The comeback of cranes 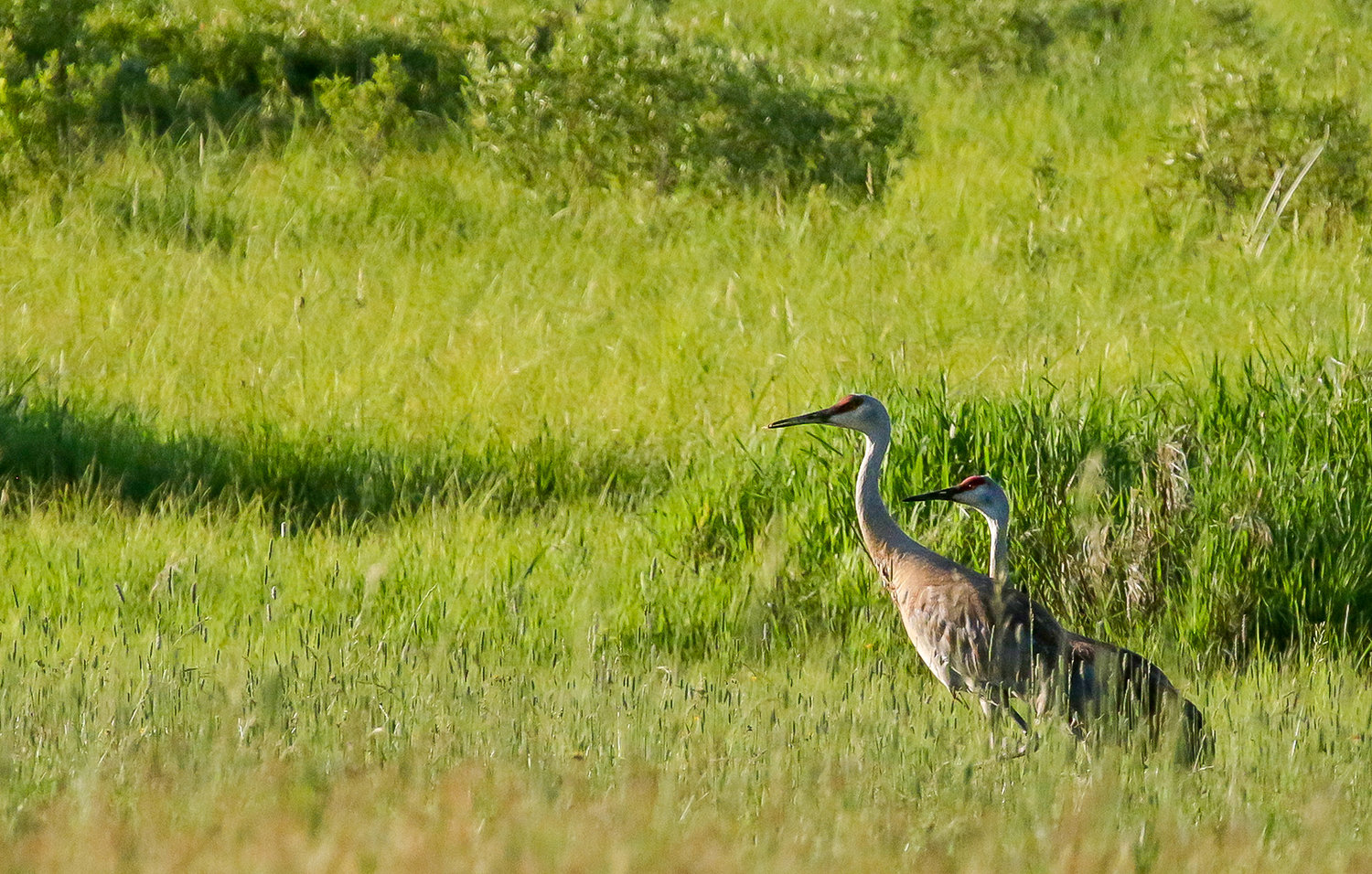 A pair of sandhill cranes were busy feeding in a hayfield just west of Tower this past week. Sandhill cranes have become increasingly common in the North Country as they’ve recovered from the effects of overhunting and other factors.
M. Helmberger 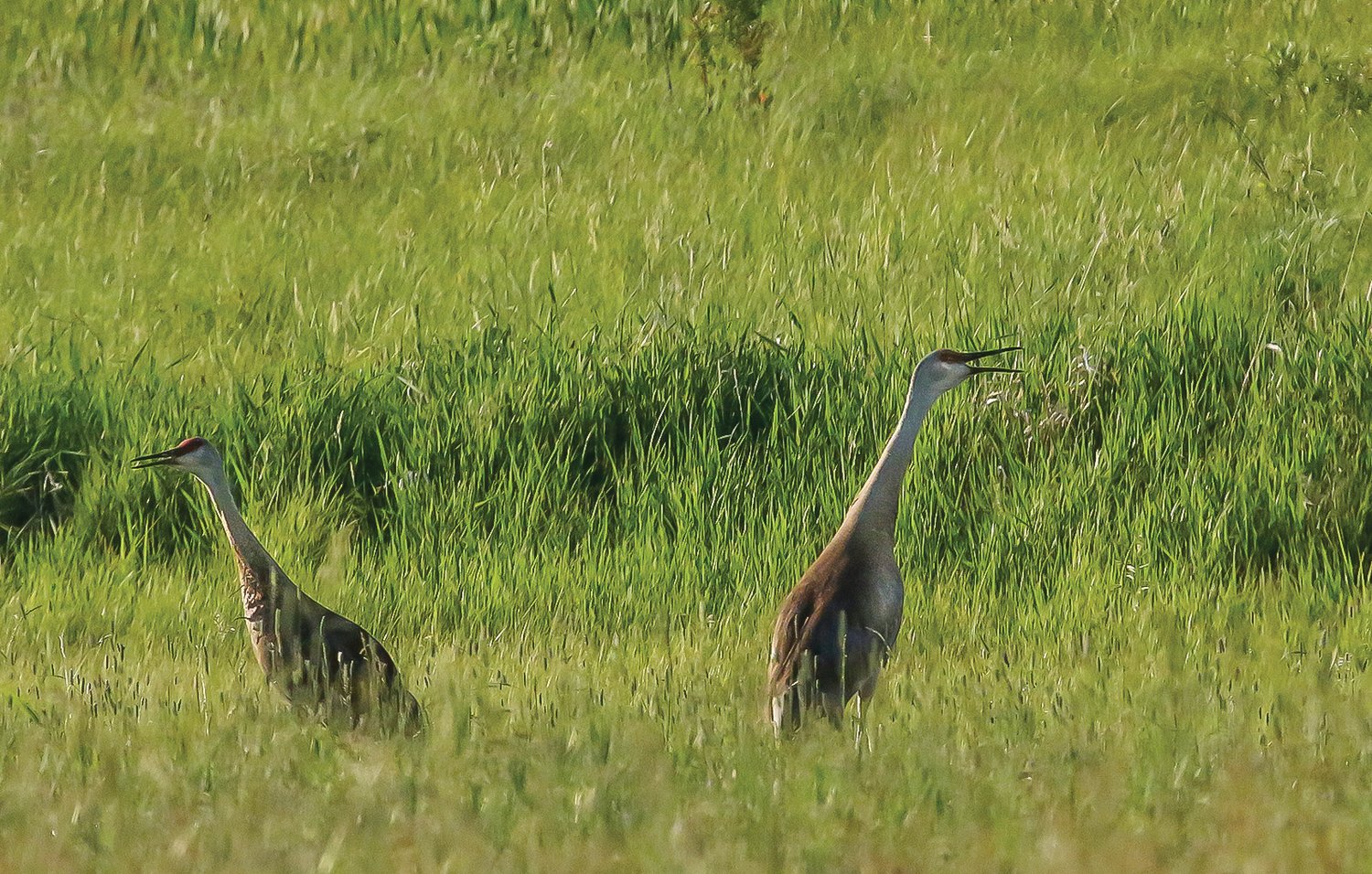 A primeval sound has returned with a vengeance to the North Country this year. Sandhill cranes, which had once bordered on extirpation in Minnesota and had been rare for a time throughout their range, have returned in sizable numbers to our region over the past decade. This year, with severe drought to our west, they have been showing up all across the area in the most significant numbers in decades.
For many humans, the bugling call of the sandhill crane harkens back to prehistory. It’s a sound that was heard across much of North America going back millions of years to a time before humans even walked on this continent. In fact, sandhills are believed to be the oldest bird species in North America, having existed in their present form for more than 2.5 million years, dating back to the Pliocene era. That’s about twice as old as the next oldest bird species.
It was the arrival of humans, particularly Europeans, that nearly pushed sandhills into oblivion. Market hunters in the 1800s and early 1900s slaughtered untold numbers of virtually every kind of wildlife that inhabited the U.S., driving some, most notably the passenger pigeon, into extinction. The slaughter decimated the populations of North America’s two crane species, with the largest, the whooping crane, still at risk of extinction even though the population is beginning to slowly rebuild. Sandhill crane populations never dipped as low, which has helped them recover more quickly.
Cranes take a relatively slow approach to reproduction, which has made their return a longer process. Unlike many short-lived species, which have lots of offspring, cranes typically raise only one or two colts per year. What’s more, cranes will spend the first four to five years of their life as non-breeding juveniles. In fact, the pair of cranes pictured here are juveniles, which are almost certainly not nesting this year. The juveniles can be recognized by their cinnamon brown plumage, which will turn a light gray once they reach breeding age.
Sandhills, like a number of larger water-related fowl, will typically mate for life and they can live 20 years in the wild so with any luck they’re able to raise plenty of young during their lifetime. Like other cranes around the world, they attract their mates through elaborate dances that include wing-flapping, bowing, jumping, and tossing of sticks and grass. Sandhills are quite vocal, often noisy even. It’s part of their highly developed communication system that helps to keep their family units together, signals danger and reinforces pair-bonds.
Minnesota actually has two separate populations of sandhill cranes. In northwestern Minnesota, sandhills are associated with the mid-continent population, which summers across a vast range that stretches all the way to far northeastern Siberia, and winters on the Texas Gulf Coast, while the east-central Minnesota population is part of the eastern population of sandhills, which winters in northern and central Florida. It’s most likely birds from the east-central population which have spread into our region in recent years, although the drought conditions to our west could have pushed some of those birds our way as well.
Most sandhill cranes breed to our north, with their summer range extending all the way to the Canadian and Alaskan arctic. They breed only in about ten northern U.S. states, including Alaska, and Minnesota is starting to have one of the more significant breeding populations of any state.
While cranes are often associated with water, they do spend a lot of time on dry land as well. In our area, they feed often in open fields, particularly around the Cook area, where the landscape is more a mix of fields and forest. While cranes are mostly after insects, amphibians, snakes, small mammals or birds, they also will eat crop seed, like corn or beans, which has created a conflict with some farmers, particularly among the mid-continent population.
But sandhills also take advantage of places where they’re unlikely to impact human activity, such as in our large peatlands. They have become regulars, for example, in the Lost Lake Swamp. It was about ten years ago, that I first started hearing their bugling calls from out in that large peatland from our high ridge on the swamp’s east side. At first, I assumed they were migrants, but now I hear their calls almost daily throughout the summer, so it’s clearly a resident population.
Sandhills are large birds, so they’re easy to spot, even at a distance. They’re among the very largest birds you’ll find in Minnesota, standing about five feet tall, with a wingspan of nearly seven feet. You might have a tough time getting close to them, however. They have excellent eyesight and tend to be quite wary of humans.
The return of sandhills to our area is just another example of the way that conservation regulations benefit wildlife, and us as well. Humans have long associated cranes with good fortune, happiness, creativity, and long life. Who wouldn’t hope to see a bit more of that?