They made their mark

ST. PAUL- The Ely Timberwolves’ magical run of 29 consecutive wins this season came to an end last week at the Class A state volleyball tournament in St. Paul. Yet, Ely proved they belonged …

They made their mark 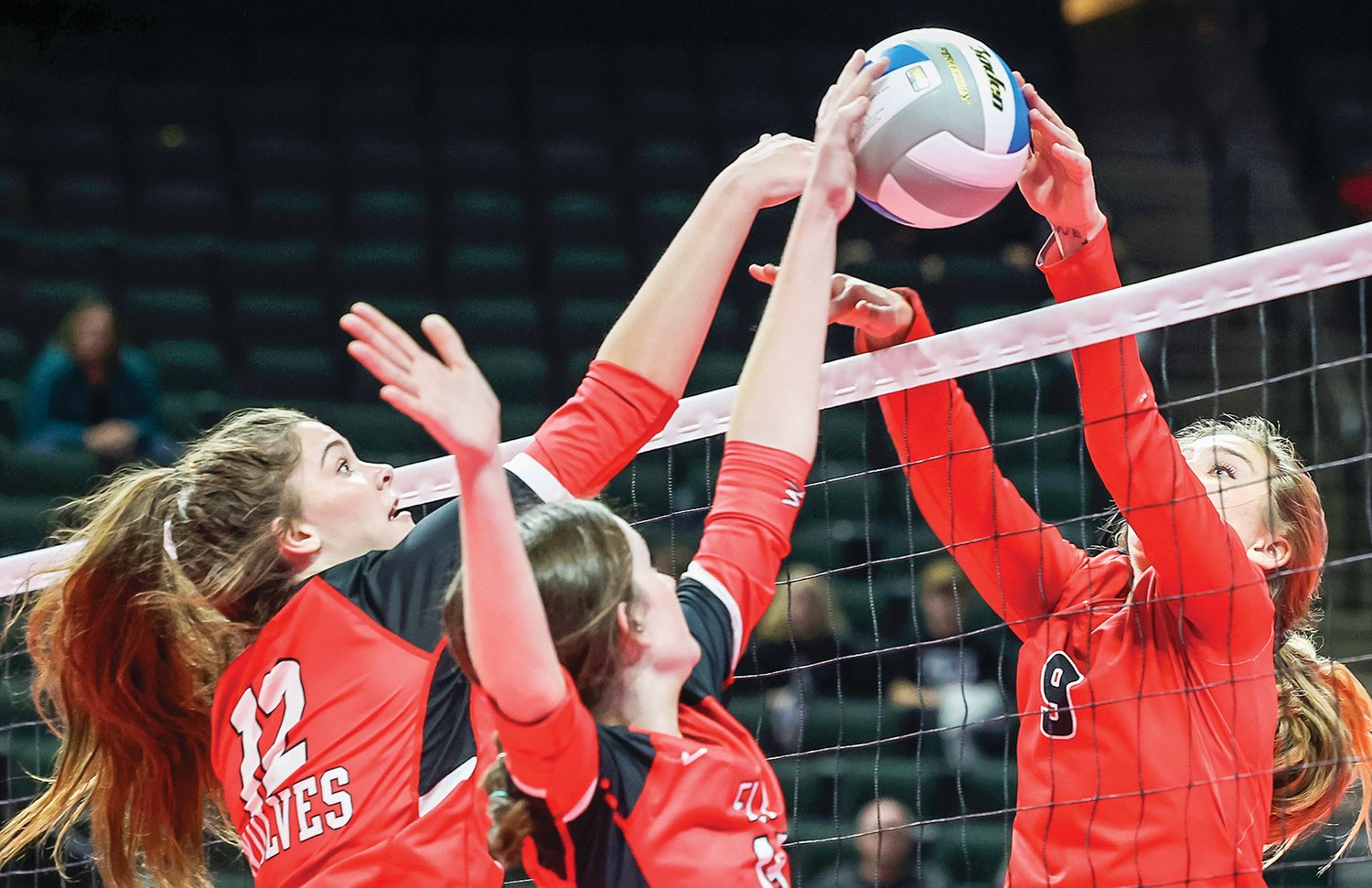 Ely’s Lily Rechichi and Madeline Kallberg battle for control of the ball against Mayer Lutheran in the opening round of the state volleyball tournament, held last weekend in the Twin Cities.
Cheryl A. Myers, MN Volleyball Hub 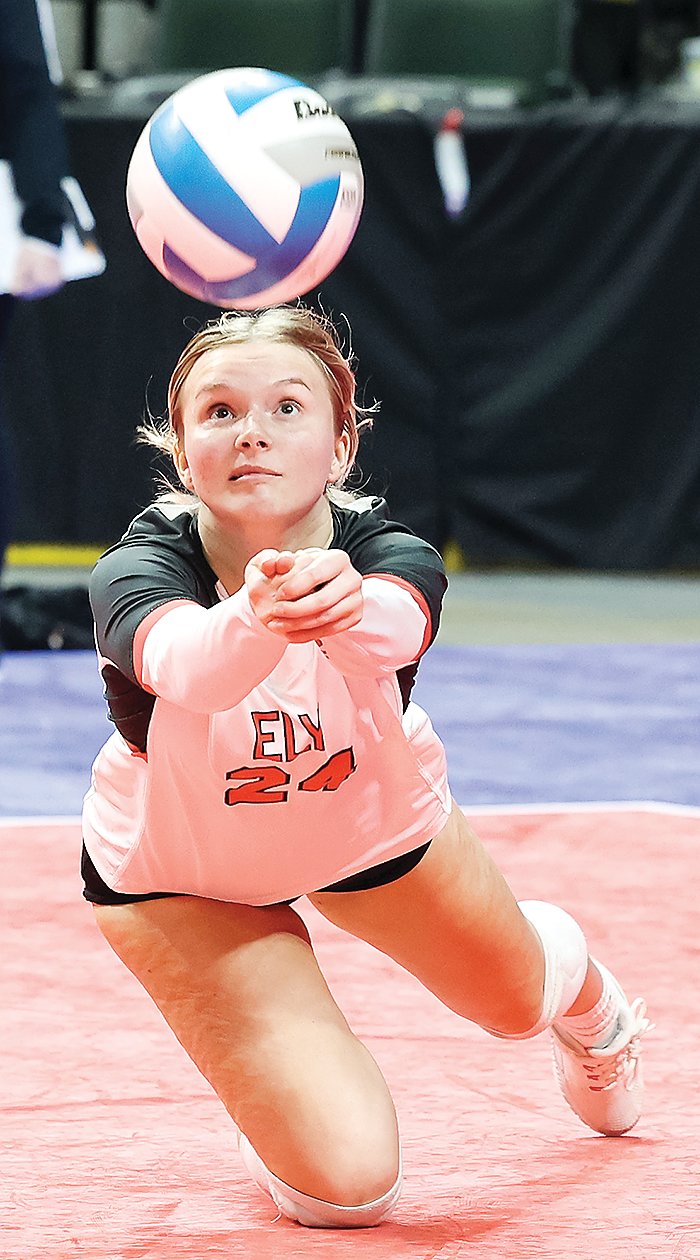 Ely senior Courtney Eilrich keeps her eye on the ball as she dives for a dig against Mayer Lutheran .
Cheryl A. Myers, MN Volleyball Hub 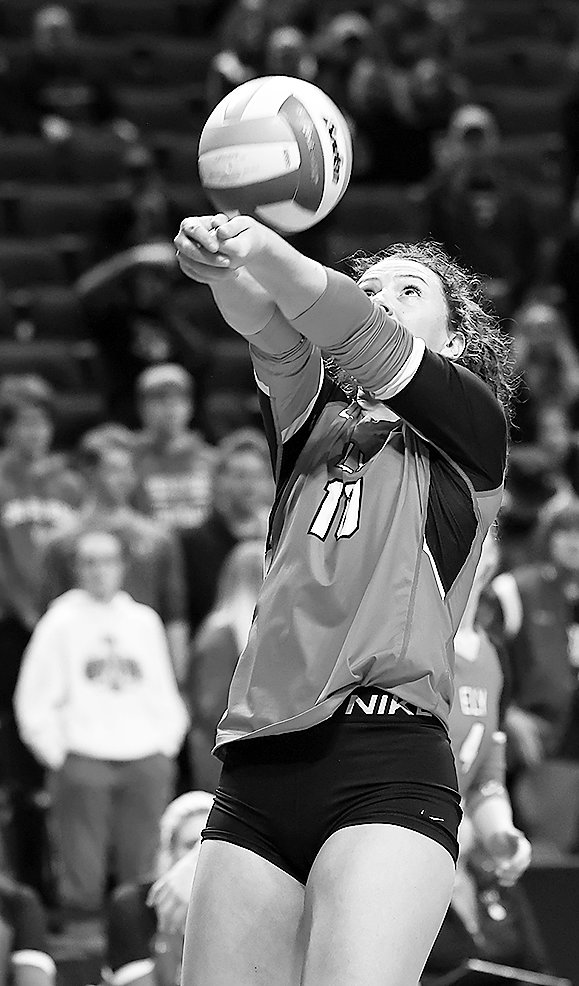 Kate Coughlin makes a dig during competition last Friday against Mayer Lutheran in the opening round of the state volleyball tournament.
Cheryl A. Myers, MN Volleyball Hub
Previous Next
Posted Wednesday, November 16, 2022 7:46 pm

ST. PAUL- The Ely Timberwolves’ magical run of 29 consecutive wins this season came to an end last week at the Class A state volleyball tournament in St. Paul. Yet, Ely proved they belonged among the best in the state with a match win over Pine River-Backus and set wins against two of the top four seeds.
Defending state champion Mayer Lutheran, seeded second, was a tough draw for the Wolves in Thursday’s opener, and the Crusaders showed they had the guns to compete for the title again by winning the first set 25-15.
But it was a different story in the second, with Ely matching Mayer Lutheran blow for blow in the early going. Trailing just 12-9, Madeline Kallberg nailed a kill and Kate Coughlin served up consecutive aces to pull the Wolves even. A kill by Hannah Penke and an attack error by the Crusaders put Ely ahead 14-12. With improved defense and mixing up their shots, the Wolves kept the Crusaders off balance as they built a 20-17 lead.
Mayer Lutheran regained its footing, however, and looked to have the Wolves on the ropes at 24-23 and serving for the set. But Penke stepped up with a kill to even the score at 24 and regain the serve for Ely’s Lilli Rechichi. Kallberg came up with a big block for a score on the next point, and the Wolves celebrated a 26-24 win when the Crusaders were called for a violation on set point.
It was a wake-up call for Mayer Lutheran, and the Crusaders snuffed out any thoughts of an upset by winning the next two sets 25-12 and 25-11 and dropping Ely into the consolation bracket. But the Timberwolves had put the rest of the field on notice that they weren’t just a starry-eyed team happy to make it to state for the first time in school history. They were there to compete hard and make a mark.
Ely’s next test was on Friday against Section 5 champion Pine River-Backus. Like the Wolves, the Tigers built their 27-4 record coming into the tourney against primarily Class A schools and were on a 16-1 streak before getting knocked off by third-seeded Mabel-Canton in Thursday’s first round. Ely and PR-B were separated by just one spot in the statewide Class A Quality Ratings formula at 12th and 14th respectively.
Not surprisingly, there were nine ties in the first set as neither team held more than a two-point lead through 16-16. But a couple of ball handling errors by the Tigers and a service ace by Rechichi gave Ely a 19-16 cushion. Bolstered by the sudden advantage, Ely put together a 6-1 run that featured a pair of aces by Kallberg and three kills by Penke to nail down the 25-17 win.
Inexplicably, the Wolves struggled mightily early in the second set as the Tigers built a commanding 11-2 advantage. Ely fell behind by ten before a short rally closed the gap to five at 20-15, but PR-B evened the match with a 25-18 win.
Set three was a blockbuster marathon with each team refusing to yield an inch as the lead see-sawed back and forth until the Tigers were poised to capture the win with the score at 24-21. Rachel Coughlin staved off the first set point with a kill, and Kallberg followed with another. An error by PR-B brought the teams even at 24-24, the 12th tie of the set. The Tigers took the lead back 25-24, but a Penke kill evened the score and the Tigers couldn’t handle two tough serves by Rechichi, giving the Wolves a 27-25 victory and a 2-1 lead in the match.
The big win pumped up Ely and deflated PR-B as the Wolves took total command of the fourth set. A pair of aces by Penke forced PR-B to call a timeout trailing 12-6, but it was only a momentary halt to the Wolves’ relentless offensive attack. Fueled by a pair of kills by Kate Coughlin and another by Clare Thomas, the Wolves extended their lead to 21-9, and a Penke kill put the exclamation point on a 25-12 win that gave Ely its first-ever state match victory.
On Saturday, fourth-seeded and fourth-ranked Badger/Greenbush-Middle River (BGMR) spoiled Ely’s bid to win the consolation bracket with a 3-1 victory, but the Wolves left everything on the floor in this one.
Tied at 10-10 in the first set, a Kallberg kill gave the Wolves a lead they wouldn’t relinquish until the Gators pulled even again at 24-24. Rachel Coughlin gave Ely a temporary 25-24 lead with a kill, but a Penke kill attempt on set point sailed wide, knotting the score at 25-25. Penke made amends on the next play, slamming a blistering kill off a BGMR block for a point, and a Gators error on the next point gave Ely a 27-25 win.
It was a tough grind for the Wolves in the next two sets. The Gators gradually pulled away in both for 25-18 and 25-15 wins and a 2-1 match lead.
With their tournament lives on the line, the Wolves turned set four into a slugfest. After Thomas broke a 6-6 tie with a kill, a pair of slams by Kate Coughlin and a BGMR error gave Ely a 10-6 lead. The Gators fought back to go ahead 14-12, but kills by Penke and Rachel Coughlin gave the advantage back to the Wolves, who built the lead to 20-16. But the Gators pulled even at 20-20 on three Ely miscues and a kill by Jade Reese.
Two BGMR errors and a Kallberg kill gave Ely a three-point edge, and a Kate Coughlin slam put the Wolves on the precipice of forcing a fifth set at 24-23. But it was not to be, as the Gators reeled off three consecutive kills to close out the set and the match 26-24, bringing to an end the best season ever turned in by a Timberwolves volleyball team.
According to tourney summary statistics provided by the Minnesota State High School League, Penke led the Ely scoring attack with 40 kills, followed by Rachel Coughlin with 25 and Kate Coughlin and Rechichi with 23 each.
Ely finished the season with a record of 30-2.