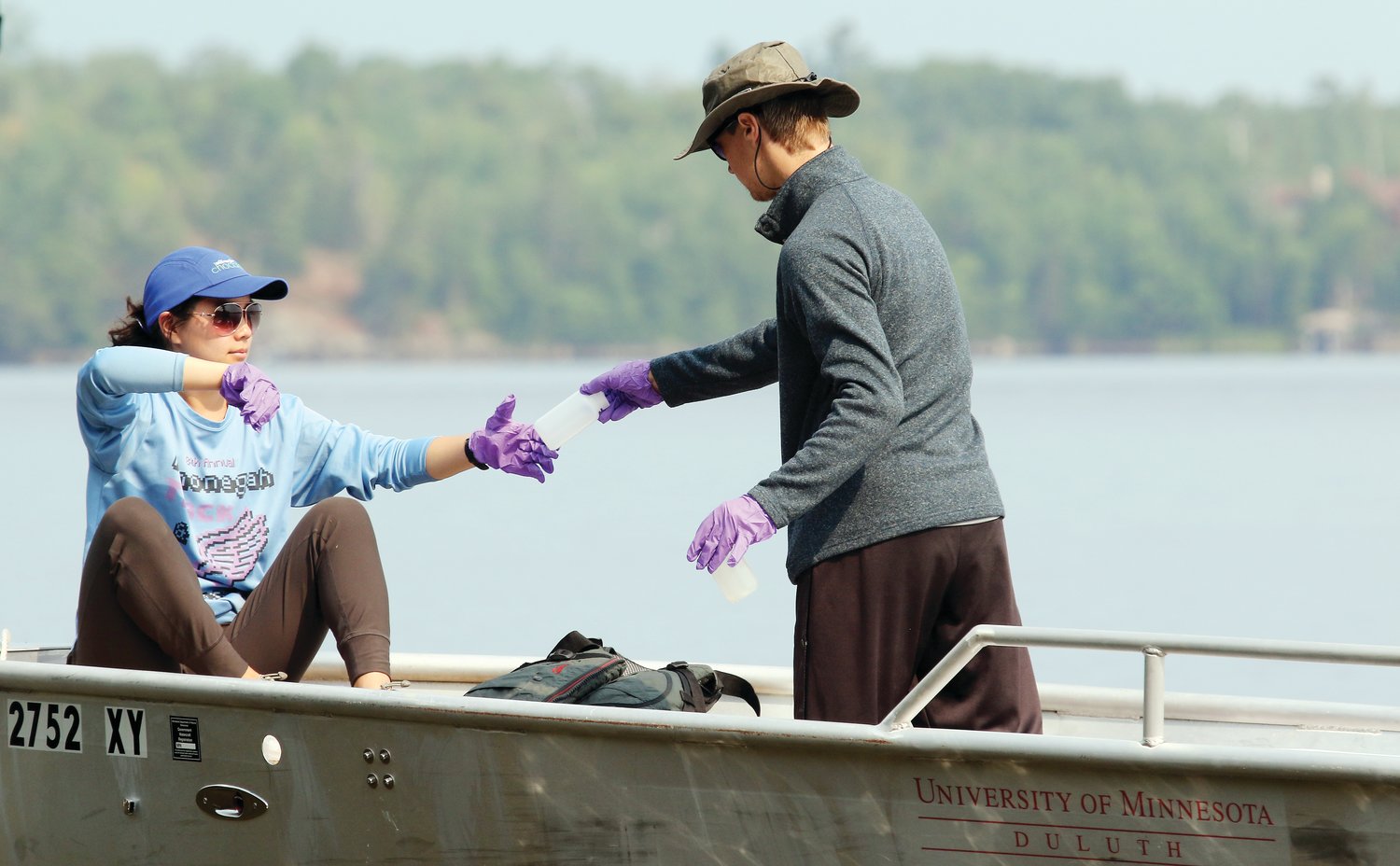 NRRI grad student Anna Totsch takes a bottle from research assistant Collin Krochalk, a UMD undergrad who is working for the NRRI this summer. They were gathering water samples on Frazer Bay on Monday.
M. Helmberger 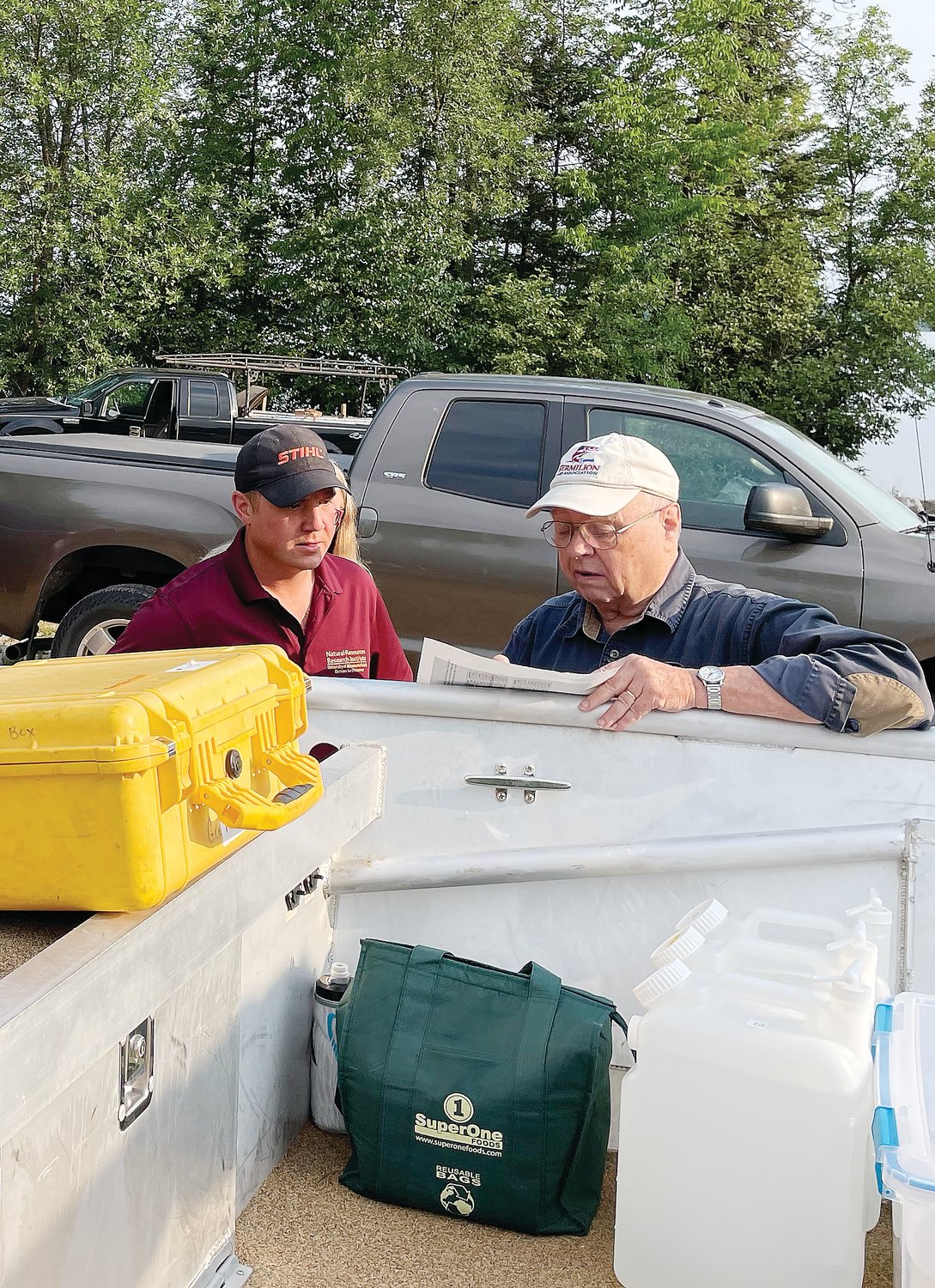 REGIONAL— Researchers from the Natural Resources Research Institute were on Lake Vermilion this week as they work to refine a high-tech testing method that could eventually make the hunt for aquatic invasive species, or AIS, far more efficient and effective. They’re getting logistical help with the project from the Vermilion Lake Association, which has long played a major role in heading off AIS on the lake.
“Everything that lives in the lake releases some DNA,” said Josh Dumke, a senior research scientist at the NRRI, which is affiliated with the University of Minnesota-Duluth. Whether plant or animal, tissue cells containing DNA are regularly sloughed off into the water, Dumke said, either through skin cells, mucous, or urine. That means, in theory, that water samples from a lake could eventually help researchers detect the presence of AIS far more effectively than current methods, particularly on large lakes like Vermilion.
The DNA that is shed by organisms is known as environmental DNA, or eDNA for short, and Dumke said it’s become a popular area of study for scientists working in the AIS field. Researchers recognize that eDNA has the potential to be a game-changer when it comes to AIS detection, but it still needs refinement to ensure it’s reliable— and that’s what Dumke and his fellow researcher Anna Totsch, a UMD grad student who’s doing her thesis on the method, are working to achieve.
“We’re still learning the best ways to obtain a positive detection of DNA,” said Dumke.
Any number of variables can impact the effectiveness of the testing method, including how much water is collected, where it’s collected, what time of the year it’s collected, and how the samples are processed afterwards.
While any number of labs around the country are working regularly with eDNA, Dumke said it’s still a new process without any standards or accepted methods in place. “The utility of it is very clear,” he said.
It’s a far cry from traditional methods of detecting AIS, which typically involve sending trained individuals out to manually search for invasive plants or animals. That’s a time-consuming and expensive process, notes Dumke. “With this, you could really broaden the scope of lake monitoring and go from testing 20 lakes a year to hundreds,” he said. And because the sampling methods are potentially no more complicated than dipping a sample jar in lake water, sampling for AIS could be done easily by citizen scientists or lake association volunteers, who could then forward their samples to a lab, such as the one at NRRI. “It’s a monitoring tool that just about anyone could use,” said Dumke.
Making detection easier increases the odds that AIS will be discovered earlier. “We know that early detection is very important,” said Jeff Lovgren, who co-leads the AIS program for the Vermilion Lake Association.
The researchers won’t limit themselves to sampling on Lake Vermilion. They’ll be collecting samples in the coming days from Shagawa Lake, near Ely, Pike Lake, near Duluth, and on Lake of the Woods.
In addition to water sampling, the NRRI team will be gathering DNA from crayfish they hope to catch in traps left out overnight. The crayfish DNA will be cross-checked with the results they obtain from the water sampling to ensure that crayfish DNA shows up in the water, and whether their detection methods are precise enough to distinguish different species of crayfish. Vermilion already has a sizable population of rusty crayfish, an invasive species introduced to the lake a couple decades ago. But other native species of crayfish are still found in the lake, so the crayfish testing will provide a good reference for the researchers.
The eDNA testing is likely to take 4-5 years before it can be used reliably in Minnesota lakes, yet even then it won’t entirely replace the need to manually hunt for AIS. Dumke said the new method can help to indicate the presence of an AIS, and possibly even general locations, but it will still take a trained individual to go out and confirm that an invasive species is actually out there, and its abundance.
Funding for the research comes from the Minnesota Aquatic Invasive Species Research Center, which obtains its funds through an allocation approved by the Legislative-Citizens Commission on Minnesota Resources, or LCCMR.

Is peak upon us?