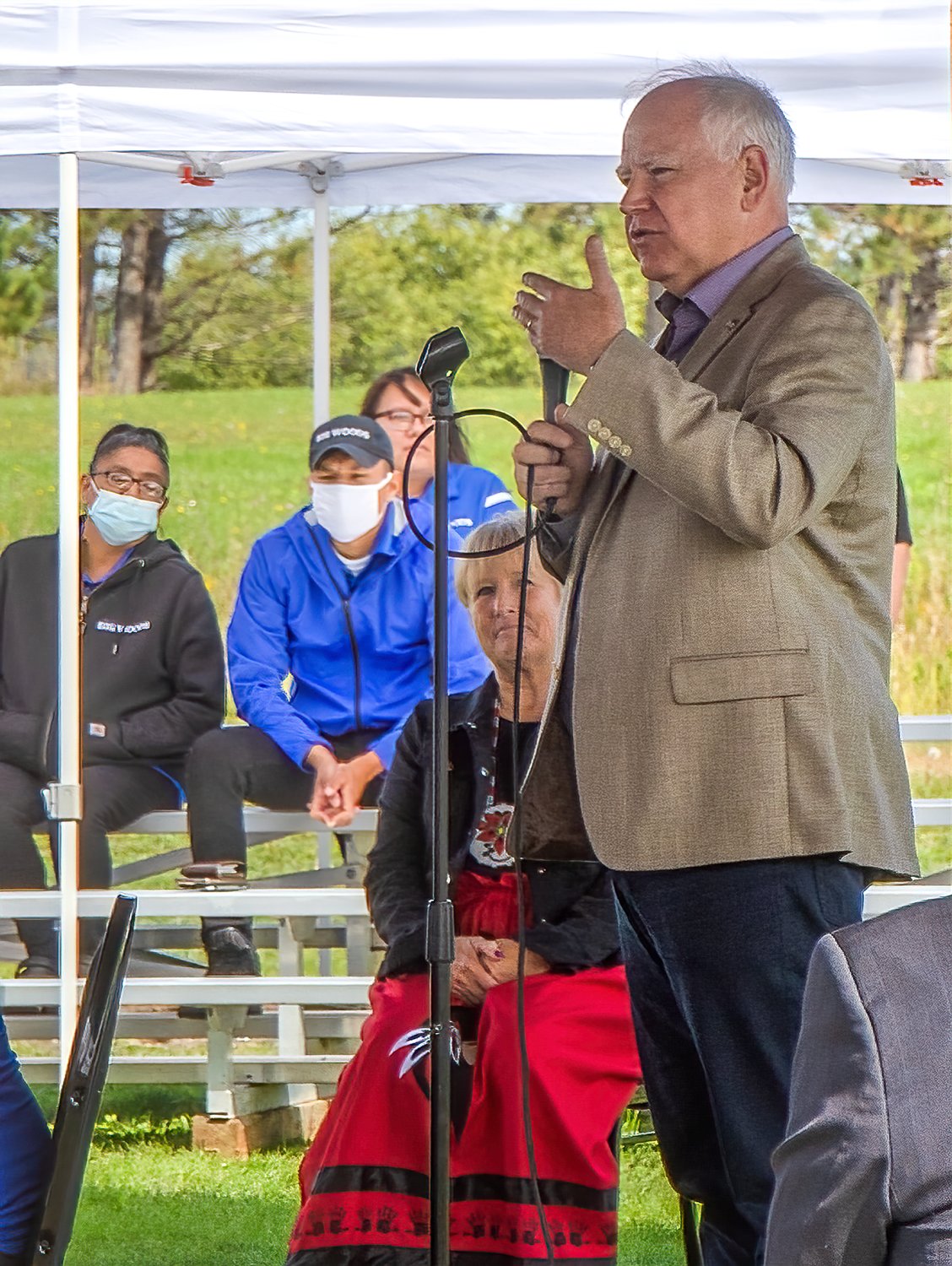 NETT LAKE- Gov. Tim Walz and Lt. Gov. Peggy Flanagan visited the seat of Bois Forte Band government here on Monday to meet with tribal leadership regarding legislative issues and tour numerous facilities.
But before their activities began in earnest, they joined about 70 others gathered on the pow wow grounds for a traditional ceremonial welcome.
As tribal Chairwoman Cathy Chavers escorted Walz’s entourage to the pavilion, they paused along the way at the Band’s Veterans Memorial for conversation and reflection. When they arrived under the pavilion, a group of six Bois Forte singers shared two songs to the beat of their drum. Elder and spiritual advisor Gene Goodsky shared the meaning of the two songs with the assembly before Chavers gave official welcoming remarks.
“This is the first time I’ve ever seen an administration that has really taken the lead and listened to the tribes and have us involved with everything with regards to our sovereignty,” Chavers said. “They recognize it, they acknowledge it, and they understand it. We really want to say that we’re very fortunate to have the governor here during this time, a very cultural event for us here, this fall time of gathering of friends and people, everybody gathering together during our ricing season. I’m very happy that they could be here because this is a time when we discuss not only business but stories, things that we want to talk about, just as friends and not as leaders. And the tribes have great friends in Gov. Walz and Lt. Gov. Flanagan, and we’re very thankful for that.”
Walz looked and gestured to the lake and Spirit Island as he began talking.
“I’m filled with a sense of gratitude of being here, I’m in awe of standing on this land looking at the rice,” he said. “To our spiritual elders and drummers, thank you. You honor us by your presence and making sure we see the traditions and understand the connections.”
“We’re here to talk about the issues that impact your community, to make sure the state of Minnesota is fulfilling its responsibility,” Walz continued. “I appreciate the kind words from the chairwoman, but doing what you’re supposed to do, you shouldn’t get patted on the back. We can’t fix everything overnight, but we can sure try and make things right.”
Walz noted that the COVID pandemic had delayed this long-planned trip to Nett Lake, and acknowledged the trials felt by the community during the past year and a half and his gratefulness for the opportunity to come together.
Flanagan also addressed the assembly.
“It’s interesting, and I use that in the most Minnesotan way possible, to be an Ojibwe woman who’s serving in state government, serving in systems that weren’t created by us or for us, but oftentimes were created to throw up obstacles for our participation. Being in these places and spaces is challenging, but it’s also been a real gift to be able to serve in this way.”
Flanagan stressed that the visit and ongoing communications are intended to have an impact that far outlasts the current administration.
“What we expect is that we are talking about it so that we’re setting the course, so that you don’t need to have an Ojibwe woman as lieutenant governor and Gov. Walz doesn’t have to be governor to ensure that this work continues in perpetuity,” she said. “This should simply be the way that Minnesota does its business from here on out.”