Young writing students get away from it all

Young writing students get away from it all 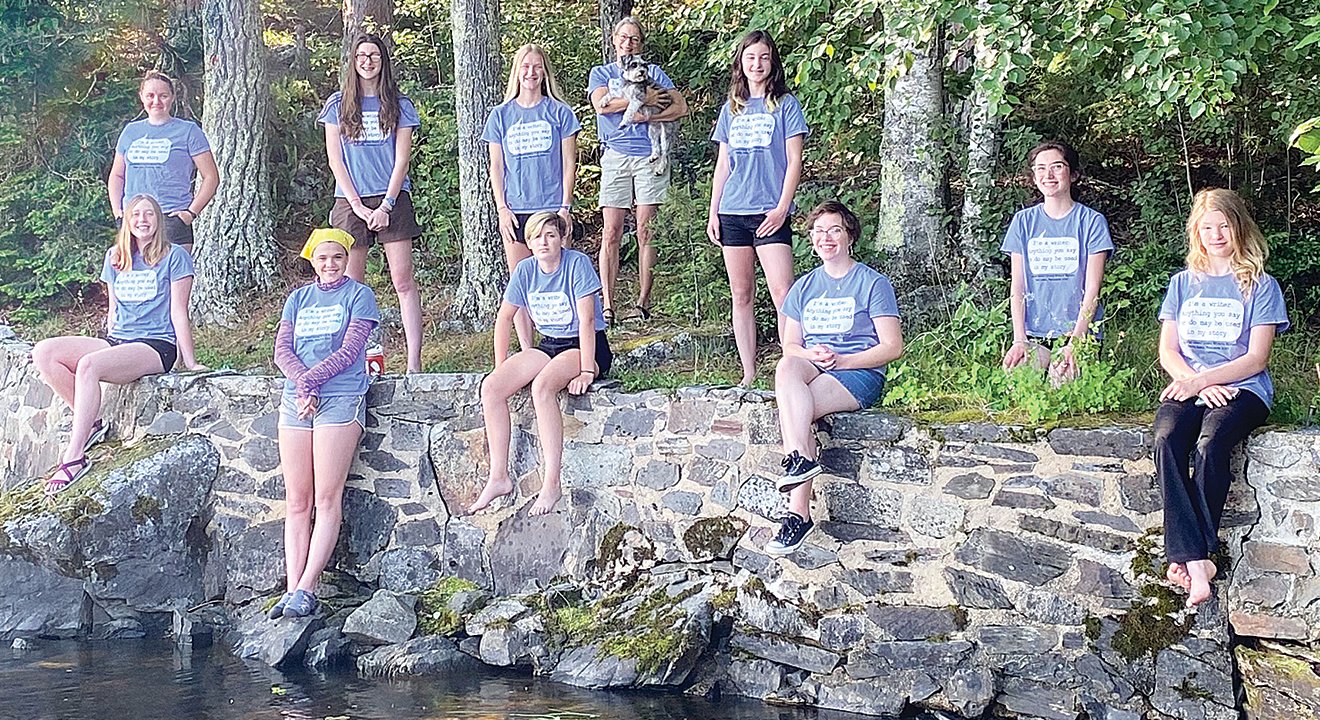 ELY – Eight aspiring young writers recently participated in a writers’ retreat with Ely school district middle school language arts teacher Heather Cavalier.
While current public health concerns over the coronavirus might seem to put a halt on such an adventure, the group made the necessary safety accommodations. “We had an absolute blast,” Cavalier said.
The girls in attendance from Ely were: Esther Anderson, Evelyn Cavalier, Zoe Devine, Abigail Johnson, Morgan McClelland, Cora Olson, and Juliet Stouffer. Samantha Kvistad, of Soudan, also joined the group.
Last fall, authors Mary Casanova and Jeanette Cox, from Story Portage, contacted Cavalier about putting together a group of teen girls interested in attending a summer writers’ retreat on Rainy Lake.
“After fundraising and planning the trip, we were upset about having to cancel due to COVID-19,” Cavlier said. “After giving it a lot of thought, we decided that by making some accommodations to our plans, we could still take the trip. We’re so glad we did.”
The girls joined Cavalier, Cox, and Ely math teacher Molly Olson, who is also the mother of one of the girls, on a four-night stay at Atsokan (Ojibway for “storyteller”) Island, just outside of International Falls.
“The girls worked individually and as a group with Mary (Casanova) to expand their writing skills, find their voice, and challenge their imaginations,” Cavalier said.
The island stay was the setting for Casanova’s historical fiction novels ,“Frozen” and “Ice Out,” as well as her next novel in the series to be published in the spring of 2021. She is an award-winning children’s author of novels and picture books. Many of her books stem from her life on the Minnesota-Canadian border, yet some of her stories have taken her as far away as France, Norway, and Belize for research.
According to her biography, whatever the setting for her books, Casanova writes stories that matter, and stories that kids can’t put down. Her book awards include: American Library Association “Notable,” Aesop Accolades by the American Folklore Society, Parents’ Choice “Gold” Award, Booklist Editor Choice, and two Minnesota Book Awards. Her books frequently land on state children’s choice book master lists across the country. “The greatest reward for me is when a young reader tells me she or he loves one of my books. For me, it’s all about communicating writer-to-reader through a character and story,” she said.
“The girls all enjoyed it so thoroughly that they will return again next year, along with six more teen girls from the area,” Cavalier said. “We are very grateful for the generous support we received from our community as well as the Ann Bancroft Foundation, which awarded nine of the girls with a one-time $500 Dare to Dream Grant.”
To contribute financially toward next summer’s trip, donations can be sent to Camp Atsokan, c/o Story Portage, PO Box 286, Ely, MN 55731. The girls are also selling T-shirts at the Ely Farmers Market and at Front Porch Coffee.