Decision comes after seventh straight loss, MSHSL refusal to allow them to compete at nine-man level in post-season

ELY – The Ely High School football team suffered their second shut-out loss in a row last Wednesday to end their regular season. The 26-0 drubbing by Kelliher/Northhome also ended their season …

Decision comes after seventh straight loss, MSHSL refusal to allow them to compete at nine-man level in post-season 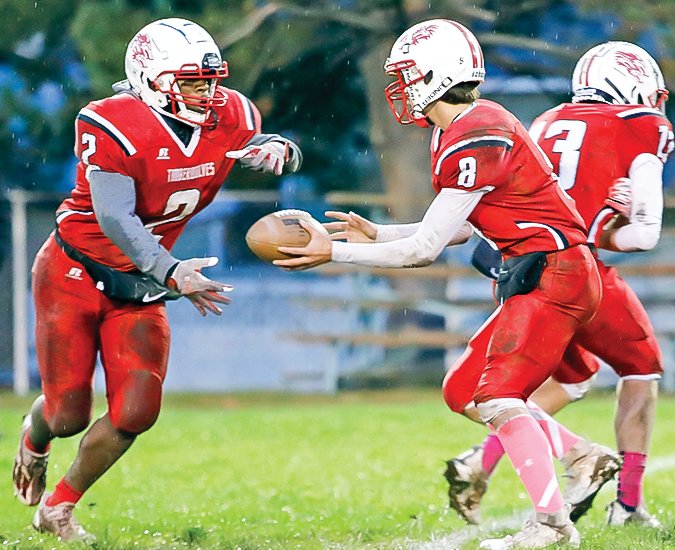 There won't be any more handoffs from Mason Davis to Jason Kerntz for the Timberwolves in 2021, as Ely officially withdrew Thursday from the Section 7A playoffs.
K. Vandervort
Posted Thursday, October 21, 2021 2:11 pm

ELY – The Ely High School football team suffered their second shut-out loss in a row last Wednesday to end their regular season. The 26-0 drubbing by Kelliher/Northhome also ended their season as the Timberwolves abruptly dropped out of the Minnesota State High School League playoffs the next day.
“Long-story short, we decided this morning not to participate in the playoffs,” said ISD 696 Athletic Director Tom Coombe, when asked about the decision.
The Wolves had struggled all season, and the road would have only gotten tougher in the playoffs. Due to inadequate numbers this season, Ely had played at the nine-man level throughout the regular season. But MSHSL rules dictate that they would have been bumped up to the 11-man competition for the Section 7A playoffs because the team had joined forces with Northeast Range in football. The rules require that a team’s class in the playoffs is based on total enrollment of a combined program.
“That would have put us up against the top-rated team in 7A, Deer River,” Coombe said. “Given the vast competitive disparity and our own participation numbers, we will not take part in the playoffs. They are a top-ranked 11-man team and we have struggled at the nine-man level this season.  It’s not an easy decision but all things considered probably the wisest and safest one.” The MSHSL denied ISD 696’s appeal to remain in the nine-man division.
Ely’s final game of the season was indicative of their season. Ely’s Gavin Marshall recovered an opening kickoff fumble against North Central, but couldn’t find the end zone. In the first half against the Stars, Ely came up short on three more possessions, including giving up an 80-yard interception for a touchdown and committing another turnover in the end zone.
The Timberwolves came out in the second half and turned the ball over two more times in three plays, leading to two more scores by North Central. Jason Kerntz led the Timberwolves with 79 yards rushing for the night.
After a season-opening victory against Carlton/Wrenshall, Ely lost seven games straight and finished their season with a 1-7 record.