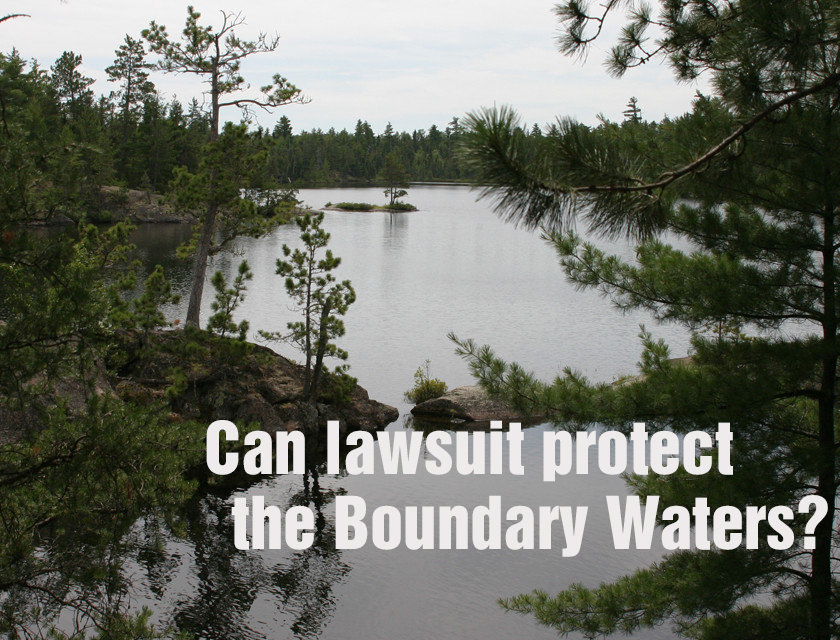 Yet state rules allow for one of America’s most toxic industries to set up shop right on its very doorstep, where we know toxic pollution will flow directly into its pristine waters and air. That simply makes no sense.”
Tom Landwehr

ELY— A northern Minnesota environmental group has filed a lawsuit that seeks to force the state’s Department of Natural Resources to prohibit sulfide-based copper-nickel mining within the headwaters of the Rainy River watershed.
The group, Northeastern Minnesotans for Wilderness, is the lead organization in the national Campaign to Save the Boundary Waters. It contends in its filings with the Ramsey County District Court that the DNR should be required to amend state rules in order to protect the 1.1 million-acre Boundary Waters Canoe Area, located just downstream from the proposed Twin Metals copper-nickel mine.
“Both state and federal law recognize that the Boundary Waters is among the most precious of all of America’s many natural wonders,” said Tom Landwehr, executive director of the Campaign to Save the Boundary Waters. “Yet state rules allow for one of America’s most toxic industries to set up shop right on its very doorstep, where we know toxic pollution will flow directly into its pristine waters and air. That simply makes no sense.”
The lawsuit will test the legal protections granted in the 1971 Minnesota Environmental Rights Act, which grants the public the ability to file suit to protect water, air, and other natural resources from impairment.
While the state has mining laws and rules designed to address pollution from mining operations, NMW contends those rules are insufficient to protect a resource as pristine and vulnerable as the water quality in the Boundary Waters. According to an NMW statement, the suit asks the court to require the DNR to begin a public process to amend the state’s non-ferrous mining rules in a manner that would fully ensure the protection of “the water and air quality, wilderness character, and other irreplaceable natural resources of the Boundary Waters.”
Much of the lower reaches of the Rainy River watershed are already protected, either through the wilderness protections afforded by federal wilderness legislation or the creation of Voyageurs National Park. But much of the headwaters of the watershed lie to the south of the wilderness boundary and outside those wilderness protections. NMW contends that if sulfide-based mining is allowed to move ahead in the watershed’s headwaters, it would be nearly impossible to prevent contamination in downstream waters. Sulfide-based mining is known to produce acid drainage that mobilizes heavy metals, resulting in toxic pollution which has proven difficult to contain.
Further, impacts on the land, including forest fragmentation, noise, light and invasive species, would clearly degrade the intact ecosystem of the wilderness, according to NMW.
“Current Minnesota non-ferrous mining rules were not intended to protect a world-class water-intensive wilderness area such as the Boundary Waters from the major damage that sulfide ore copper mining always causes,” wrote Becky Rom, chair of the Campaign to Save the Boundary Waters, in a blog post on the lawsuit. “The rules establish standards for mining districts, places where significant changes to ecosystems and landscapes and degradation of air and water are acceptable. The rules purport to limit, but not prohibit, pollution of the environment, which is unacceptable in the Boundary Waters and its headwaters,” concluded Rom in the post.
NMW also contends that state regulators need to take a tougher stand on the threats posed to the Boundary Waters in the wake of the Trump administration’s recent decision to weaken federal environmental protections and the president’s executive order waiving environmental reviews for new mines, pipelines, and other major projects given the current economic “emergency” stemming from the COVID-19 pandemic.
It’s unclear what impact Trump’s executive order will have on individual projects, and it’s unlikely to have any impact on the proposed Twin Metals project. That’s because the DNR announced last December that it will conduct its own, independent environmental review of the project before Twin Metals could apply for any permits.
The Timberjay reached out to Twin Metals for its perspective on this latest development, but the company declined comment.