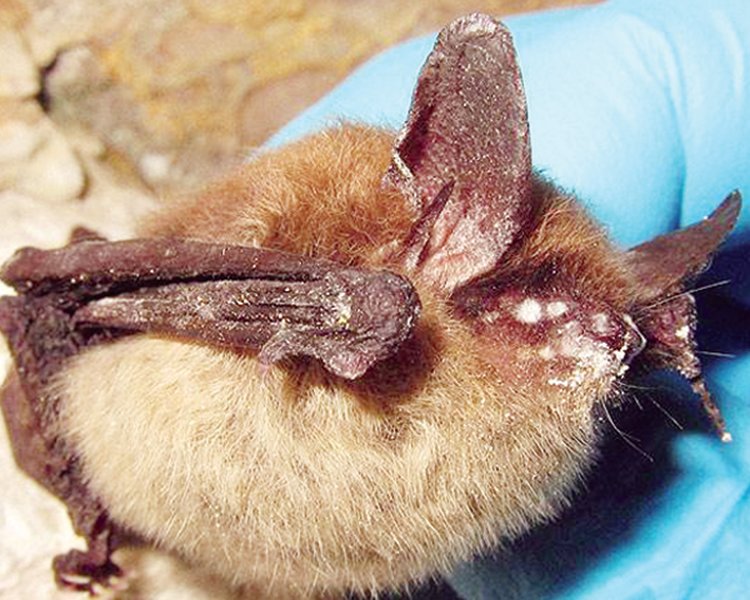 SOUDAN MINE— About 90 percent of the bats in this once-thriving hibernaculum appear to have died since the introduction of a devastating fungus that causes white-nose syndrome in a number of species of bat. That’s according to a survey of hibernating bats in the mine that researchers with the Department of Natural Resources conducted last month.

The impact of white-nose syndrome appears to have hit the northern long-eared bat the hardest of all. In past years, the forest bat species typically accounted for roughly 5-10 percent of the estimated 15,000 bats that used to spend the winter in the mine, according to Gerda Nordquist, a DNR biologist who has been studying the Soudan Mine’s bats for years. This year, said Nordquist, she did not find a single northern long-eared bat. In fact, the little brown myotis was the only bat species found in the mine this winter, said Nordquist.

The DNR first confirmed the presence of white-nose syndrome in the Soudan Mine as well as Mystery Cave in southeastern Minnesota in 2015. The latest survey results are consistent with the pattern of mortality observed in neighboring states once the deadly fungus that causes white-nose syndrome is introduced into a mine or cave where large number of bats congregate during hibernation. DNR officials believe the same type of mortality is also certainly being experienced in other lesser-known bat hibernacula.

“While there may be a rare hibernaculum in Minnesota that hasn’t yet been impacted, WNS is likely to be present anywhere bats hibernate in the state,” said Ed Quinn, DNR natural resource program supervisor. White-nose syndrome is named for the white fungal growth observed on infected bats. It is not known to pose a threat to humans, pets, livestock or other wildlife.

Researchers in other states have noticed that the northern long-eared bat appears to be the most susceptible to white-nose syndrome, and the species was federally-listed as threatened in 2015. Nordquist said the species may be at risk of extirpation in parts of its range, although total extinction is less likely. Summer research in northeastern Minnesota in 2017 did show the presence of some northern long-eared bats, although in significantly lower numbers than in years before the introduction of the disease.

The precipitous decline in Minnesota’s hibernating bat population may be reaching its low point. Many parts of the eastern U.S. saw similar declines when white-nose syndrome spread to those areas, beginning in 2007, but at least some individual bats appear to be more resistant to the effects of the fungus. “We’re hoping that this is the bottom,” said Nordquist.

Even if surviving bats can provide the nucleus of a more resistant population, Nordquist notes that recovery, if it happens at all, will be a slow process. Bats are slow breeders, with females typically having no more than one pup per year.

That’s why researchers are now focusing on ways to ensure the health of bats that do survive the effects of white-nose syndrome. “We are currently hoping to get funding to look at the effects of artificial roost structures,” said Nordquist. By providing bats with safe and reliable summer roosting and denning sites, researchers hope it will allow bats to heal, raise their young, and put on body weight before the next period of hibernation. Nordquist said researchers have concluded that bats that go into hibernation with the most stored fat reserves seem to be more likely to survive the effects of white-nose syndrome.

Researchers hope that developing the ideal “bat house” and understanding the best locations and alignment for such houses will provide bats with a better chance of long-term survival.

Although the disease is transmitted primarily from bat to bat, people can inadvertently carry fungal spores to other caves on clothing and caving gear.

For several years, public tours of Soudan Underground Mine and Mystery Cave have begun with a brief lesson on how to prevent the spread of WNS.

As tours will continue at these and other caves, the DNR will continue to follow recommended national decontamination protocols to prevent human transport of fungal spores. The DNR urges owners of private caves to learn about WNS and take similar visitor precautions as outlined in the protocols.