Size matters when it comes to your ranking at the feeder, but other factors are also at play

If you’ve spent any time watching birds at a feeder, you’ve probably noticed there’s not much equality in the world of birds. There’s a pecking order, but just which birds are …

Size matters when it comes to your ranking at the feeder, but other factors are also at play 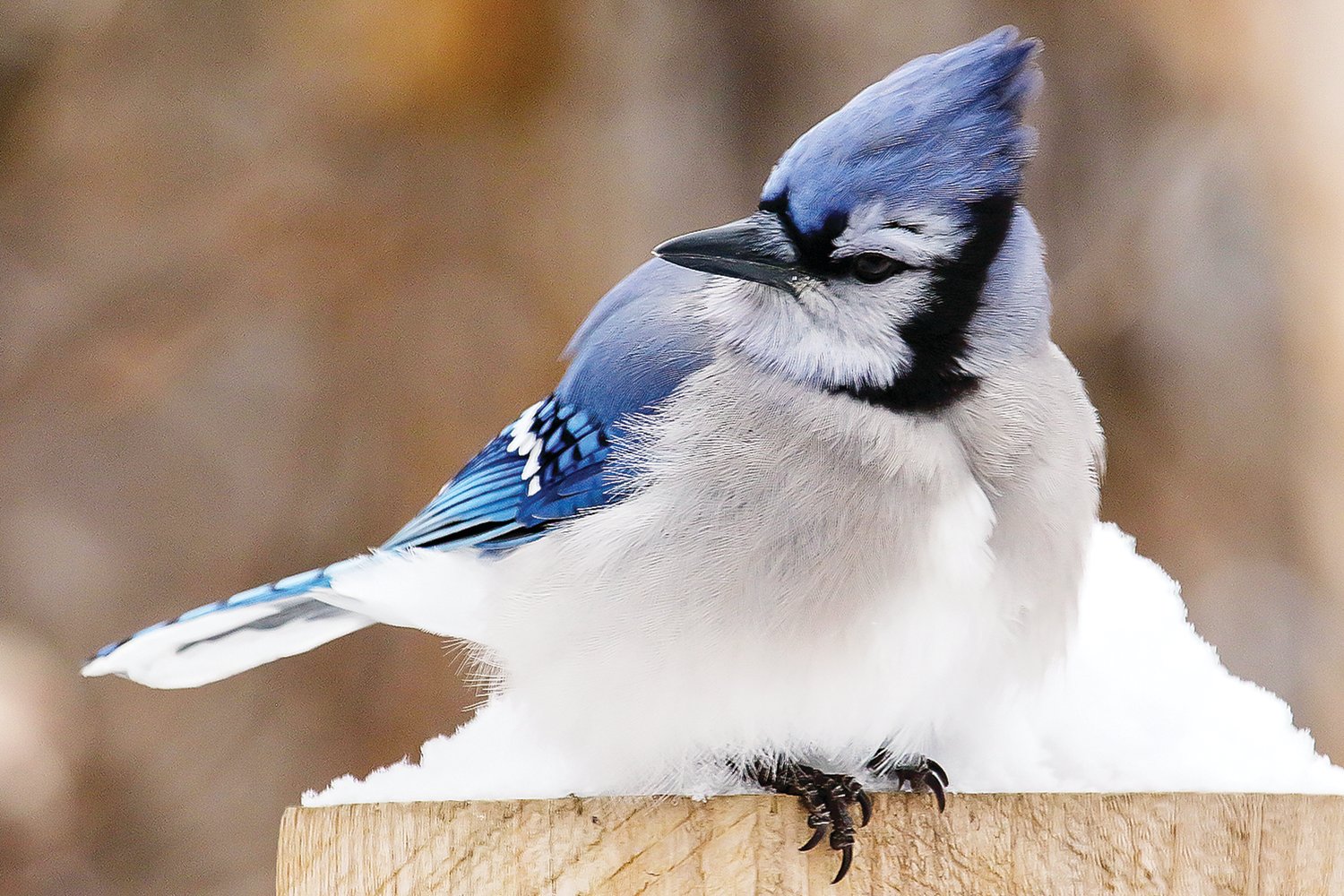 Here in the North Country, blue jays pretty much rule at most bird feeders, putting them near the top of the pecking order.
M. Helmberger 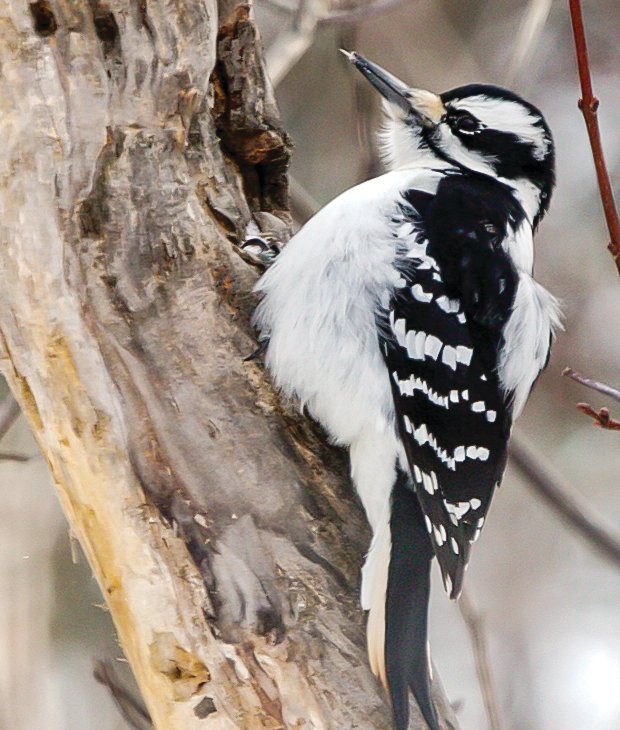 With their prominent beaks and pugnacious attitude, hairy woodpeckers punch above their weight class at the bird feeder.
M. Helmberger 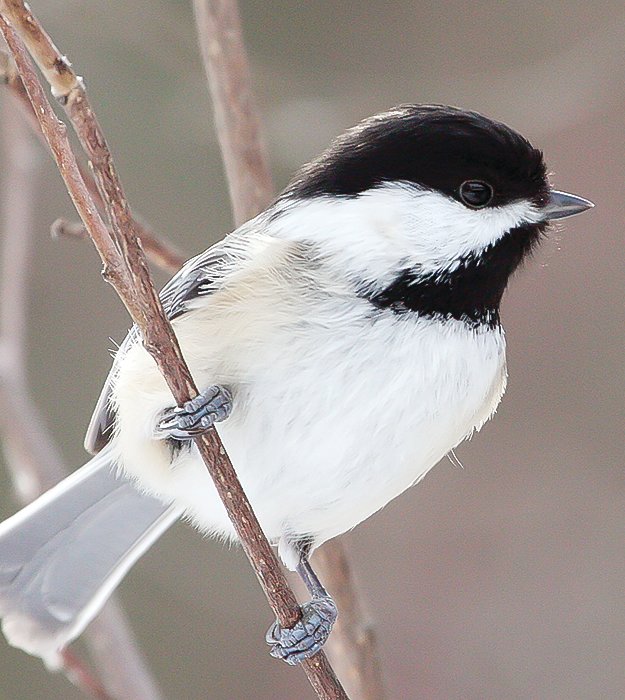 Tiny and good- natured, black-capped chickadees rank near the bottom of the bird feeder pecking order. If you want to attract these cheery birds, consider hanging some feeders designed for small birds in your yard.
M. Helmberger
Previous Next
Posted Wednesday, January 12, 2022 7:02 pm

If you’ve spent any time watching birds at a feeder, you’ve probably noticed there’s not much equality in the world of birds. There’s a pecking order, but just which birds are on top and which are at the bottom is always an interesting question.
Turns out, there’s actually some science on the subject, thanks to Project Feeder Watch, a citizen science project based at the Cornell Lab of Ornithology. It involves a network of 30,000 people around North America who have been regularly reporting observations at their feeders since 1987. Those reports involve not just which birds observers saw and how many, but how they interacted in some cases.
The Cornell researchers applied algorithms to all that information, including nearly 100,000 separate interactions between almost 200 bird species to determine what are essentially power rankings for a significant percentage of the birds that live in North America. It was all first reported in The Washington Post.
Not surprisingly, size matters, which could be why the wild turkey topped the pecking order. But the turkey’s pugnacious attitude likely also played a role, and that was true for a number of birds that seemed to rank higher, or lower, than size alone might suggest.
Here in the North Country, most of us have had little or no experience with wild turkeys at our feeders, although that’s certainly changing as that species has dramatically expanded its range into our region in recent years.
Among the more common species here, ravens came in second, just behind wild turkeys, in the pecking order, followed in sixth place by the American crow. Pileated woodpeckers ranked in 10th place, which was actually a bit behind some smaller birds, including three other woodpeckers. It turns out woodpeckers in general ranked higher in the pecking order than size alone would suggest, perhaps because they’re so used to pecking. I know I wouldn’t want to get in a fight with a hairy woodpecker. That bill looks pretty sharp and I’ve seen them scare off bigger birds more than once. The study, surprisingly, ranked hairy woodpeckers in 37th place out of 100 common feeder birds, and I have to say I could quibble with that ranking a bit.
Blue jays came in at 32nd in the ranking, but from my experience they pretty much rule the roost in our yard, barring a visit from a crow or raven. Their cousins, the Canada jays, came in at 41st.
By contrast, some of our shyer birds fell well down on the list. Pine grosbeaks came in at 62nd, which is quite low for their size, but they’re notoriously skittish at feeders when other birds their size are around. They probably qualify as Canadians, so they’re naturally averse to conflict.
Black-capped chickadees were near the bottom, coming in at 89th place. But, at least around our house, what they lack in swagger at the feeders, they make up for in sheer numbers. They easily haul away three-quarters of the sunflower seeds I put out on a daily basis.
While I think the rankings are generally in the ballpark, in my opinion, there are definitely a few misses.
The study lists pine siskins in 79th place, but that certainly has never been my experience. Yes, siskins are among the smallest of feeder birds, they are notably aggressive in defending their spot in the feeder. When challenged, they routinely will spread their wings, to show off their bright yellow wing bars. I’d put my money on them any day in a contest with, say, a pine grosbeak.
And I would have rated the evening grosbeak significantly higher than 52nd. While they came in higher than the pine grosbeaks, in my experience they are notably pugnacious at the feeder, particularly when there’s several of them. There is strength in numbers after all, so birds that arrive in a flock can generally dominate at the feeder more effectively than one or two. Redpolls are a good example. While these diminutive birds ranked a lowly 83rd, not many birds in my experience are going to plop themselves down in a feeder packed with more than a dozen of these sunflower and thistle seed consumers.
While the study found that size does matter in many cases, there are exceptions to that rule. The largest birds that appear regularly at our feeders are ruffed grouse, which come in to eat the cracked corn I spread on the ground for the blue jays. But they’re so goofy, a mere chickadee can spook them at times, sending them scampering off through the brush complaining like a high brow old maid from Downton Abbey. The squirrels seem entertained by the grouse antics and regularly mock charge them, apparently just to watch their reactions. Unfortunately, the Feeder Watch study didn’t include ruffed grouse in its ranking, although they made clear that squirrels, when they arrive on the scene, tend to dominate the feeder.
While some birds would seem to be disadvantaged by a pecking order, it actually serves to keep everyone safe. Birds know the score when there’s competition at the bird feeder and that helps to reduce the conflict that could otherwise occur. The pecking order may seem unfair but at least it keeps everyone from being pecked.

From drought to deluge