A short history of water on The Rock

You would think that when you live on an island and are surrounded by water that there couldn’t possibly ever be a problem with, well, water. Only here’s the rub. It’s all in the …

A short history of water on The Rock 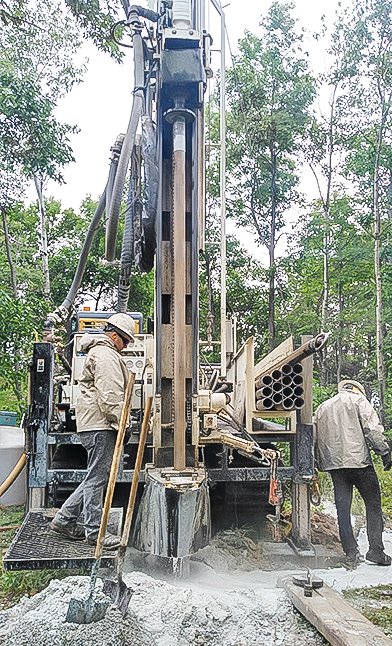 You would think that when you live on an island and are surrounded by water that there couldn’t possibly ever be a problem with, well, water. Only here’s the rub. It’s all in the lake. And as adventurous as it seems at first; the hauling buckets up for dishes, the jumping in for a cold bath, or drilling holes in the ice, eventually our modern convenience seeking minds or our aging bodies turn to the possibility of having indoor, running water.
Of course, our journey with water started like everyone’s. You know, it’s only a short distance to grab a couple of 5-gallon buckets for house water and dog water. The dogs, of course, never really drink from the lake. They liked it hauled up, too. Is it girls or boys at the docks for first “baths?” And, lest we forget, the midnight jaunts to the little shack out back. Of course, we modernized as we could: electricity meant a heater and a light we could turn on from the house before heading out to the shack and eventually we could draft lake water in the summer for house water and an indoor potty! The addition of a water heater meant hot showers out on the deck. Oh, for wilderness luxury!
All that still left us stranded off the rock for winter or, as we were coming to think of it, back to the caveman days of drilling holes in the ice and carrying buckets. I doubt that cavemen had ice augers and plastic buckets but still….
A few years ago, when I decided the rock would be my full-time residence, I put heat lines into the water lines. A huge improvement for drafting water from the lake in the winter. Goodbye, Caveman! Almost.
While the heat lines did keep the water from freezing there seemed to be other factors affecting the lines themselves. The plastic pipe itself would shrink or the ice would shift and pull the pipes apart at the weakest connection. I found myself, on a couple of occasions, having no water halfway through a shower, while quickly producing a lovely ice rink in the front yard. And, of course, it always happened when it was at least 20 below.
Now, while I have a bit of a do-it-yourselfer bone, which I get from my father, I decided it was time, and maybe past time to contact the professionals. I don’t suppose that I can give a shameless plug to who I have come to think of as MY plumbers and well drillers, but I contacted Froe Brothers and they returned my call right away. Yes, they would look at my lake water system and see what could be done but the real solution to my water problem was to drill a well. Oh boy…
And so, the decision was made. I cannot say enough about the professionalism and dedication of the Froe Brothers and staff. They were almost as excited as I was when we hit water at 65 feet. They kept handing me pieces of the drilled rock from the well shaft and I still have them. The water is clear and delicious. And when all was said and done, they say we have enough water to run a car wash. An interesting idea for an island place, so stay tuned!
Do you think that I have reached the end of the history of water on the island? Or maybe the highlights will change only every century or so. My modern convenience seeking mind and my aging body hope so.