Another overall first for Devine

DULUTH— Ely senior Zoe Devine topped the field at the Duluth-Marshall sprints here on Saturday, finishing just ahead of frequent rivals Lydia Kraker and Rowan Bixler, both of whom hail from the …

Another overall first for Devine 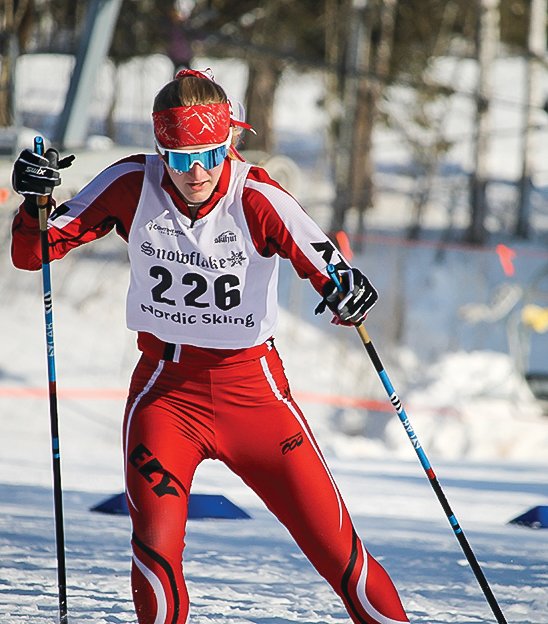 DULUTH— Ely senior Zoe Devine topped the field at the Duluth-Marshall sprints here on Saturday, finishing just ahead of frequent rivals Lydia Kraker and Rowan Bixler, both of whom hail from the Nordic ski powerhouse Duluth East.
Devine has topped the field twice in the last two weeks, suggesting that she could well be one of Section 7’s top contenders at this year’s state meet. Devine, competing at the Duluth Nordic Center, finished the 1.3-kilometer sprint with a time of 3:33.0, four and a half seconds ahead of second-place finisher Kraker and 5.7 seconds faster than Bixler.
Other Ely girls posted strong times and mostly finished in the top third in the field of 69 competitors. Phoebe Helms finished in 18th place with a time of 4:00.0, just three one-hundredths of a second ahead of teammate Ava Skustad. Right behind was Claire Blauch, who finished 20th with a time of 4:05.8. Anna Dunn finished in 22nd place with a time of 4:13.2.
For the boys, Eli Olson led the squad, finishing in 13th place in a field of 69 with a time of 3:29.9.
Milo McClelland finished 22nd with a time of 3:45.1 and Tory Hughley finished 28th in 3:49.1. Hughley finished in eighth place later in the day in the three-kilometer freestyle event, with a time of 8:42.0. Nathan Hoffmeister finished 18th in the field of 42, with a time of 9:12.5.
For the girls, Sydney Durkin finished ninth with a time of 9:37.0 and Rena Johnston took 13th in 10:06.9.
The Wolves now head into a bye week after an action-packed stretch during which they competed in five meets in two weeks. “We get a chance to recover and shift our training,” said Head Coach Todd Hohenstein. Skiers will face more intensive meets as they shift into the pursuit format ahead of the sectional competition and the state meet. “Instead of just one 5km race, most skiers will now do two 5km races,” said Hohenstein. “In addition, two skiers will make up a relay team for a shorter event. One group of skiers need to adapt to a longer distance and another needs to transition to a shorter distance but faster.”
The Wolves will be back in action on Jan. 28, when they host the Ely Invite at Hidden Valley, beginning at 11 a.m.