REGIONAL— Plentiful snow and winter recreation typically go hand-in-hand, but the region is still feeling the effects of two December snowstorms which left area ski and snowmobile trails a … 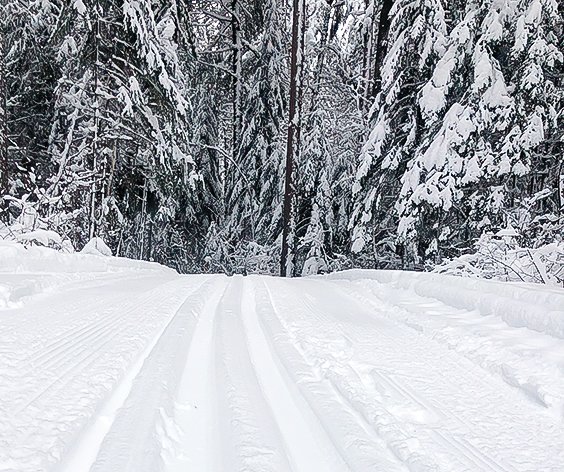 REGIONAL— Plentiful snow and winter recreation typically go hand-in-hand, but the region is still feeling the effects of two December snowstorms which left area ski and snowmobile trails a mess. The first snowstorm dumped anywhere from one-to-two-feet of wet snow throughout the North Country, leaving brush and many trees bent over under the weight, blocking trails that had only been cleared days or weeks before in many cases.
The second storm brought less snow, but pummeled trees already stressed by heavy snow with an extended period of high winds, which blew down more trees and left the snow littered with branches and pine needles.
While trail clean-up is mostly completed in many areas, the conditions have created other challenges as well, particularly for snowmobile trails which require grooming to maintain good trail conditions. The snow is providing a thick layer of insulation that is keeping area swamps from freezing enough to support the weight of heavy groomers, according to DNR trail crews.
What’s more, the intense cold that typically settles in here in the North Country in late December and early January has yet to arrive, further delaying freeze-up of those traditional trouble spots. Unfrozen creek crossings and water tracks in area peatlands are posing challenges for grooming operations, both for the DNR and local clubs. That’s impacted grooming operations along the Arrowhead Trail, which provides the backbone for the trail network between Tower and International Falls. Even so, DNR trail crews report that conditions on both the Arrowhead and the Taconite trails have improved markedly in the past week and are now listed in fair condition. Snow depths range from 14 to 28 inches throughout the area, with a trail base of one to four inches.
According to DNR assistant area supervisor Brad Dekkers, trouble spots still remain on the Taconite Trail, near the Pike River crossing and around Pfeiffer Lake, and on the Arrowhead Trail, near Lost Lake and The Landing.
The Putnam-Fishing Lakes trail also remains largely ungroomed as state grooming operations focused initially on the heavier-use trails.
December’s heavy snow has also impacted lake ice conditions, which are reportedly rough in spots with significant areas of slush, another impact of the heavy snow that fell last month.
Cross country ski trails are generally in better condition, although the heavy snow has complicated trail grooming to some extent. The Tower ski trails are now tracked and in generally good condition, although the trails remain littered with debris, mostly pine needles, which blew off the trees during the storm that struck just before Christmas. The area has seen almost no appreciable snow since then, which would otherwise have covered much of that debris and improved ski conditions.
Meanwhile, ski conditions at Hidden Valley in Ely are reportedly excellent, with trails groomed for both classic and skate skiing. The most recent grooming reported as of Tuesday was on Thursday, Jan. 5.