COVID-19 forces adjustments as ATV owners to gather next month

COVID-19 forces adjustments as ATV owners to gather next month 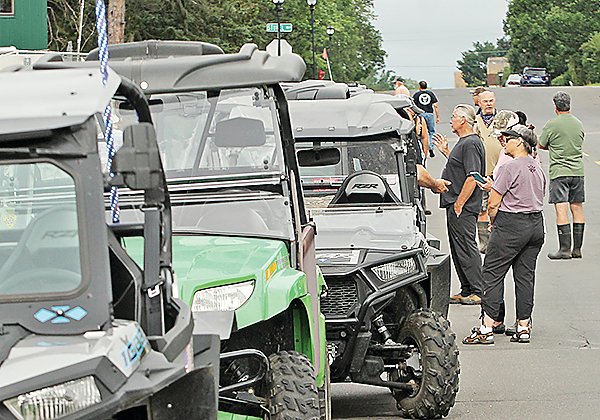 ATV enthusiasts gathered on the streets of Ely last month for a rally and ride to Babbitt. Plans for a state ATV convention here, set for September, will be adjusted to reduce the risk of spread of COVID-19.
K. Vandervort
Posted Wednesday, August 5, 2020 4:51 pm

ELY – The Minnesota ATV Association’s annual convention here next month has been forced to downshift because of public health concerns due to the expanding coronavirus pandemic gripping the state.
The local Prospector Loop ATV Club’s Ride and Rally event, scheduled for Sept. 18-19, will be more focused on the “riding” and less so on the “rallying,” according to convention organizers.
With the pandemic, organizers are focusing on having a dozen different rides to choose from and are planning for ATVAM members to return for a full Ride and Rally in 2021, according to Prospector President Nick Wognum, as stated on the club’s Facebook page last week.
The traditional VIP Ride will take place on Friday, Sept. 18, with everything being held outside. Participants will start from the fairgrounds at Timber Hall in Embarrass, ride to Tower for a lakeside catered lunch and then take the trails back afterward.
“This is a nice ride that will give people a first look at Prospector, plus they’ll get to enjoy a catered lunch on the shores of Lake Vermilion,” said ATV Minnesota President Ron Potter. “Luckily we were able to find outdoor areas with plenty of room for people to spread out. Both Timber Hall and McKinley Park have plenty of space for social distancing.”
The Prospector Loop trail system, on the drawing board for more than seven years, is in the midst of a $2 million construction project, with money coming from state bonding dollars, the Department of Iron Range Resources and Rehabilitation, the state ATV fund (license and gas tax money) and grants from two of the largest ATV manufacturers, Polaris and Yamaha.
The full 250-mile Prospector Trail system could be completed within two or three years and will connect Finland and North Shore trail systems with Babbitt, Embarrass, Ely and Tower-Soudan, including Bear Head Lake and Lake Vermilion state parks.
A team of volunteers from those four communities continues to work on construction projects along the Prospector Loop trail system.
“Like everyone, we’ve been impacted by the pandemic and there’s a couple areas that won’t be done until 2021,” Wognum said. “But the vast majority of routes will be open for this year’s event. And when we host again next year, everything should be completed so there will be new opportunities.”
As many as 12 different ride options, from 25 to 180 miles, will be available during the convention to give everyone from the novice to the experienced rider choices for a fun day out on the trails, led by volunteer guides.
“Each ride is unique and we have staggered starting times from seven locations to spread people out,” he said.
All trail ride participants will be required to register online prior to the event at www.atvam.org. The website includes descriptions and maps of each of the 12 rides. The VIP Ride is limited to 200 people and each of the pack rides has specific limitations as well. Some rides are limited to only 10 or 20 machines.
ATV Minnesota is following all state and CDC public health guidelines for the rides, and the annual auction has been moved to an online format.
“We had planned to have the banquet and auction at the Miners Dry building at Ely’s Historic Pioneer Mine,” Potter said. “To keep with the guidelines we knew the indoor part would be difficult so the annual auction will be done online. We’re hoping this works out and people have the ability to bid whether they’re on the ride or not. It’s our major fundraiser and there’s always some great items to bid on.”
The group is also working on how to hold a general membership meeting and election of officers.
“We have some ideas that we’re exploring and we will let our members know how that will work as we move forward,” said Potter.
For more information, go to www.ATVAM.org.