BABBITT- Northeast Range School is sending its high school basketball girls to play with the Ely Timberwolves this year. Yet the Nighthawks gym still resounds with the sounds of bouncing balls and … 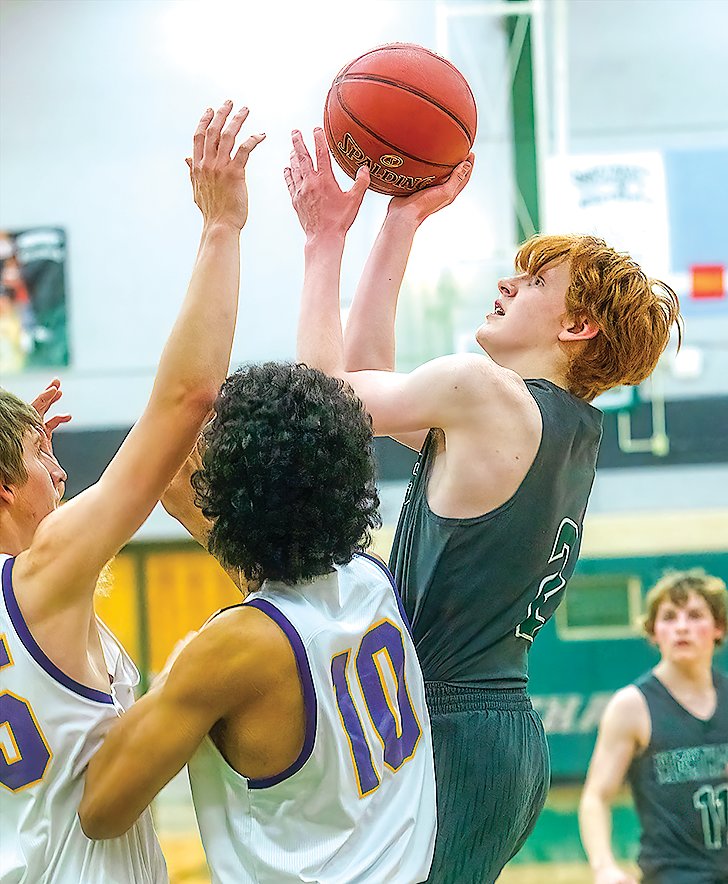 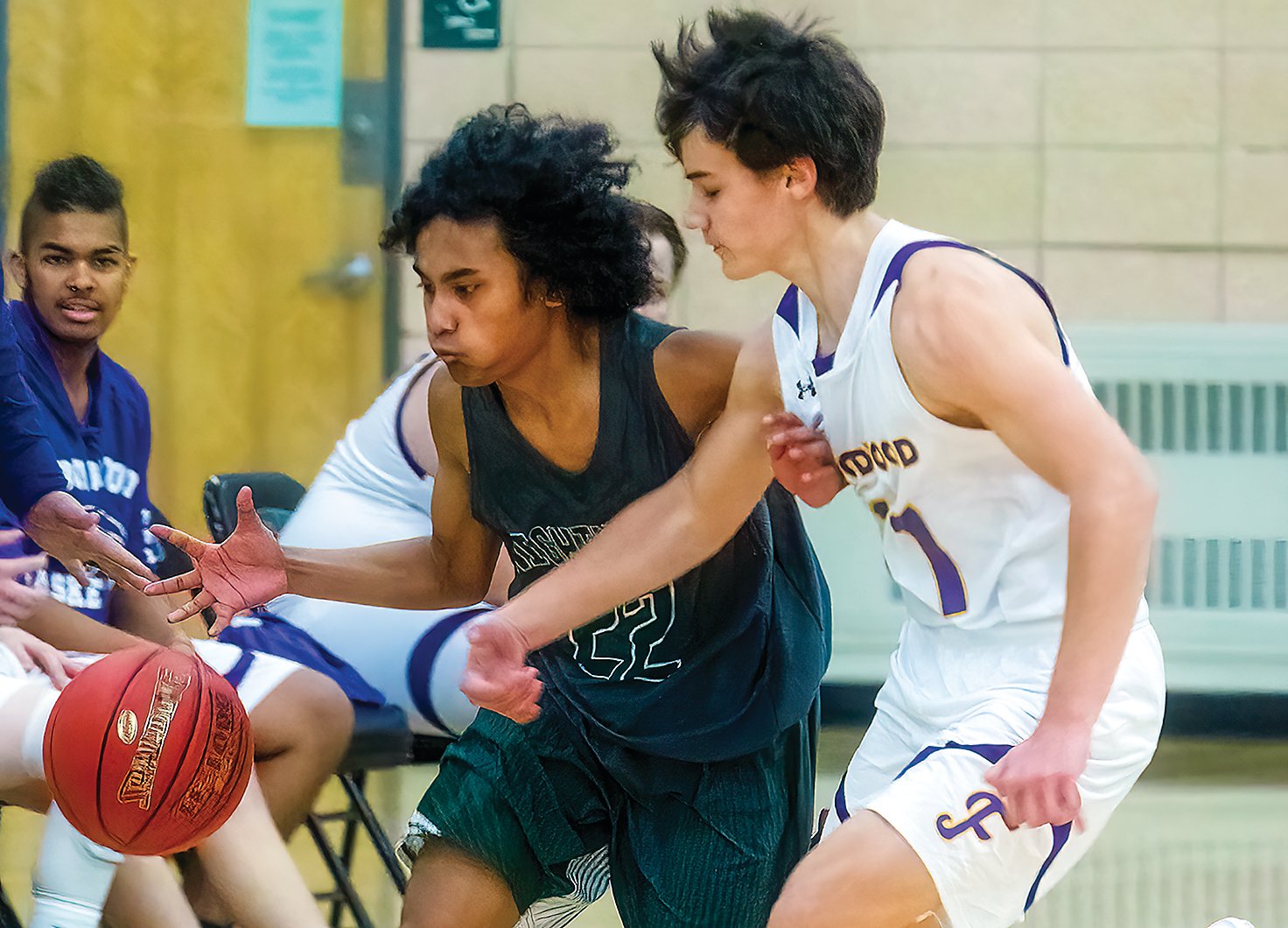 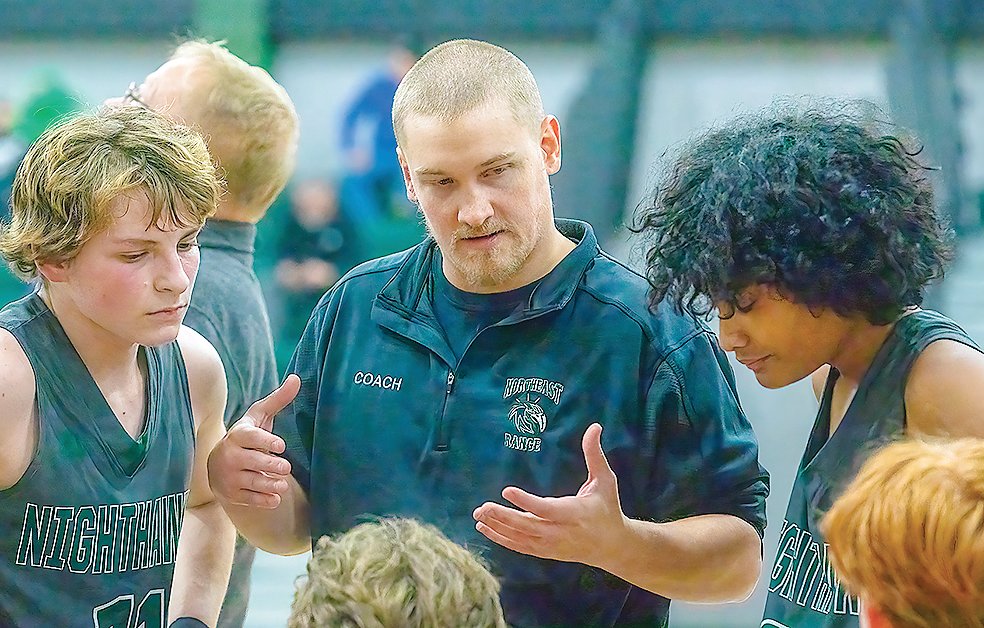 BABBITT- Northeast Range School is sending its high school basketball girls to play with the Ely Timberwolves this year. Yet the Nighthawks gym still resounds with the sounds of bouncing balls and swishing nets, thanks to a bunch of boys who just want to play basketball and a former NER player who believes passionately in the value of team sports.
Cody Siebert, the canine officer for the Babbitt Police Department, knows those sounds all too well as a 2011 NER graduate and former player. He can’t remember a time in his youth without basketball.
“I was in the gym since I was a kid and could walk,” Siebert said. “I’ve played basketball my whole life.”
Siebert didn’t just embrace the game, however. He embraced the life lessons taught to him by his coaches.
“The biggest impact I had on my life were my coaches. I wouldn’t have gotten to where I’m at without them supporting me and pushing me along the way,” Siebert said. “I became an officer now in the city and I never would have gone down any of those routes without playing sports. I don’t know where I’d be without sports, to be honest.”
Siebert said he knew he wasn’t good enough to play for an NCAA Division I school when he graduated. Instead, he focused on the professional goal of becoming a law enforcement officer, obtaining his bachelor’s degree from St. Cloud State. He hadn’t planned on returning to Babbitt, but when a spot opened up with the police department, Siebert couldn’t pass it up.
His work as a canine officer has included a lot of time at NER, where the seeds for resurrecting the boys hoops team, terminated five years ago, were sown.
“I’ve been in and out of the school and got to know the kids through that,” Siebert said. “They had mentioned wanting to play basketball, and I remember sitting down two years ago trying to convince other people to start it up. Finally I said it’s either me or nobody, so I picked it up and rolled with it.”
He started last year with a junior varsity level team with 18 kids that played a few games and scrimmages. Nine of them decided to make the jump to varsity level competition with him this year.
“We’ve got three eligible seniors, one junior, one sophomore, three ninth graders and one eigth grader,” he said.
And because the kids were the ones who wanted to play, Siebert said practices so far have been spirited.
“They’re the ones pushing it the most and they’re doing a good job,” he said.
Season opener
On Thursday, Dec. 1, six of the team’s players suited up and hit the home hardwoods for the first game of the season against Floodwood in front of a tiny but enthusiastic group of fans.
With no varsity experience and a limited bench, Siebert’s squad battled hard but quickly fell behind, trailing 39-11 at the half.
But Siebert’s mantra during timeouts, “Just have fun out there,” appeared to sink in in the second half, particularly with Floodwood’s bench getting more and more playing time.
The Nighthawks’ floor general was Wyatt Martin, and his up-tempo style was punctuated with slashing drives to the basket for shots or to draw defenders to him for passes to open teammates.
“He’s been playing since he was little and he’s a really good ball handler and very knowledgeable of the game,” Siebert said. “It’s wonderful to have him there.”
Scattered shouts of encouragement came sporadically from the stands, and cheers echoed in the rafters as Martin, Danny Daniels, and Logan Meskill hoisted up three-balls that connected. Martin ended up hitting for 27 points in the contest.
The Nighthawks nearly tripled their scoring in the second half, and although they wound up on the losing end of a 74-40 contest, they won a different and perhaps more important victory that night: They brought boys basketball back to NER.
“First games are always the toughest,” Siebert said. “But I saw the hustle – they’re down by 30 points and they never quit. I told them to put a full court press on and they just got more amped up with it. That was a good thing to see. There’s really not much negative we can take out of it. Sure, we lost, but there’s not much negative when it’s the first game for practically a new team.”
Siebert appreciates the challenge, and knows there will likely be more such losses in the weeks ahead. But the lessons to be taught are larger than how to shoot a free throw or run an inbounds play, and Siebert’s easygoing style is well-suited to the task.
“With a brand-new team, you can only go up,” he said, then laughed. “And I can’t do too bad at my job, I guess. But it’s a lot of fun, and we’re learning every single day.”