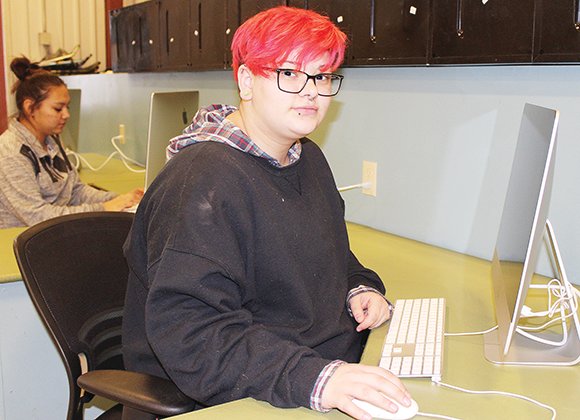 It’s a place where they feel comfortable and can be who they want to be, but still provide the academics that they need to succeed.”
Frank Zobitz

TOWER— The city of Tower took a risk in 2013 when it invested approximately $530,000 to renovate the former manufacturing plant for Powerain into the Vermilion Country School, or VCS, a new charter school serving grades 7-12.
Seven years later, it’s clear that the city’s gamble has paid off— in educational opportunity, community service, good-paying jobs with benefits, and in financial returns to the city.
While enrollment has never reached the initial estimates developed by the school’s founders, the small school environment has clearly benefited that students who have made the school their educational home.
“It provides a safe place,” said school administrator Frank Zobitz. “It’s a place where they feel comfortable and can be who they want to be, but still provide the academics that they need to succeed.”
The school was founded on a student-directed, project-based approach, but that method has been modified over the years as the school has adapted to the needs of its students. The school still does maintain a strong emphasis on environmental education, which has been a part of the school’s mission from the beginning and students spend a considerable amount of time in the outdoors. Earlier this month, for example, several students spent three days winter camping on the edge of the Boundary Waters. They also spend time on a wide range of outdoor projects, from trail building in the warmer months to snowshoeing in the winter.
Community service is also an important part of the VCS curriculum and students are frequently out in the community as a result. They regularly assist with the monthly senior bingo operated by Friends of the Vermilion Country School, they help unload the truck at the Tower Food Shelf every month, and they rake leaves for older residents in the community in the fall. They’ve painted fire hydrants around town, brushed and cleaned up a long-ignored portion of the local cemetery, and regularly sing Christmas carols at area businesses ahead of the holidays.
The school has also kept an open door to the community, which has been part of the school’s mission— and it’s one that has been enhanced by the recent installation of high-speed fiber to the building. As one of the partners that received funding from the Blandin Foundation, the school has opened a computer lab that’s available to the public from 11:30-2 p.m. on days the school is open.
The school’s food service program not only provides breakfast and lunch to students, but also to seniors in the community through senior dining at the school as well as Meals on Wheels.
Former Tower Mayor Steve Abrahamson said he always felt confident that the school was a good bet for the community. “I’m a 70-percenter,” he said. “If I feel that the chance of success is above 70 percent, to me it’s worth it. And if it’s helping some kids who are really in need, that’s huge.”
Abrahamson said he had confidence in those who founded the school and recognized that the new school would have access to sufficient resources to be successful.

Financial and
economic impact
The financial and economic benefits to the city have also been significant. Back in 2011, when the school’s founders began seriously eyeing the former Powerain building as the most likely location for the new school, it had fallen into disrepair following the demise of the car wash manufacturer in the wake of the 2008 financial collapse. That left the city without a tenant in the building or a means to repay money still owed on the facility.
At the time, the Tower Economic Development Authority, or TEDA, still owed just over $300,000 in principal and interest on an outstanding non-recourse loan from the Department of Iron Range Resources and Rehabilitation. While the IRRR declined to fund renovations to the building to make way for the charter school, agency officials did agree, at the request of charter school founders, to forgive the outstanding loan. While that retired a significant debt, it still required the city to finance the renovations on its own.
To do so, the city issued a $400,000 revenue bond, payable over ten years, that paid for the bulk of the renovations. The city paid for approximately $130,000 in additional renovation costs above and beyond the bond proceeds out of its general fund reserves.
Nearly seven years later, the school has proven a solid investment for the city, one that continues to generate $78,000 annually in lease fees. As of this month, the school has paid the city a total of $507,000 in lease fees and that will rise to $533,000 by the end of the current school year. Of that, approximately $330,000 will have gone toward retiring the revenue bonds, while the remaining $203,000 will have allowed the city to more than recoup the approximately $130,000 in general fund reserves spent on the project.
The payments on the revenue bond remain current and will now be fully retired in less than four years.
The school contributes to the community economically as well, said Zobitz, who notes that the bulk of the school’s roughly $700,000 annual budget is spent locally. About half of that is payroll for teachers, paraprofessionals, bus drivers, and a full-time cook, and much of the school staff lives in the local area. Any employee who works at least half-time qualifies for health insurance coverage.
Meanwhile, notes Zobitz, “We spend over $45,000 locally on gas and vehicle maintenance, in addition to our lease payments.”

Looking ahead
Despite limited enrollment, currently in the high 30s, the school has managed to maintain a so-far comfortable financial cushion. Its most recent audit shows the school with a $131,000 unreserved fund balance, or 19.4 percent of the school’s general fund expenditures. That’s considered a healthy fund balance for a school of this size, although it did decline last year due to higher costs and a dip in enrollment.
But Zobitz, who’s still in his first year as school administrator, has a plan. Zobitz, who was born and raised in the Tower area, is working to rebrand the school and begin a more aggressive student recruitment effort than VCS has undertaken in several years, including more personal outreach to students who already have some connection with the school, either through friends or family members. “We find our students through word of mouth,” said VCS board chair Jodi Summit.
School officials aren’t looking for a major expansion in their student body, and such an increase isn’t necessary to achieve their objectives. Even just ten more students would allow the school to add another teacher, keep budgets in the black, and serve the needs of the young people who come through their doors.
“Our school is providing a great education and social experience for our students,” said Summit, who has been the board’s chair since the school opened in 2013. “Our staff goes above and beyond to make sure our students have the skills they’ll need as adults to succeed in the world.”