TOWER— The city council here gave a unanimous green light at a special meeting on Monday to the purchase of a new ambulance before the end of the year. The council took the action at the … 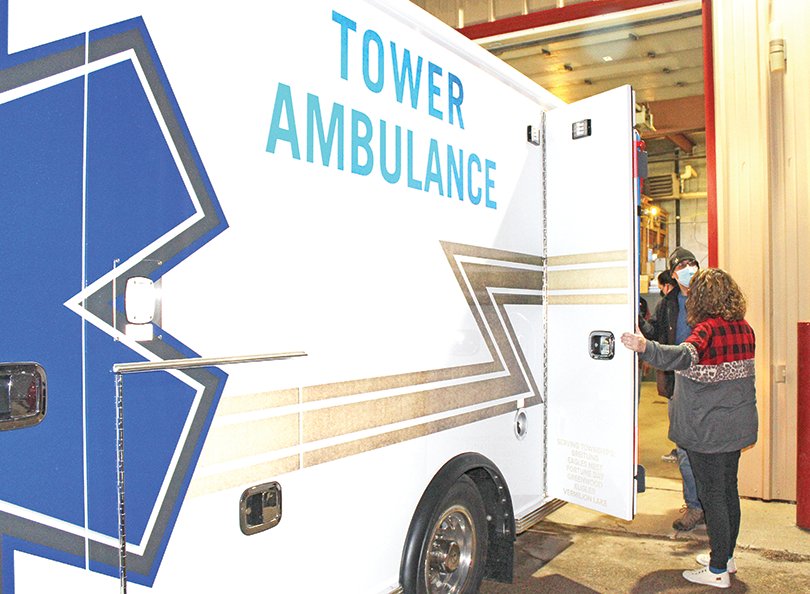 TOWER— The city council here gave a unanimous green light at a special meeting on Monday to the purchase of a new ambulance before the end of the year.
The council took the action at the recommendation of the Tower Ambulance Commission, which is comprised of local townships included in the Tower Ambulance Service’s coverage area. Ambulance director Dena Suihkonen told the council that the condition of the service’s 2013 ambulance continues to deteriorate, and a 2005 rig is currently being used only in emergencies given its condition. The 2013 vehicle currently has about 120,000 miles on it, but it’s likely to have considerably more by the time the new ambulance arrives.
Currently, delivery of a new rig is running about 12-18 months after order.
Ambulance Commission members have indicated they want the service to have two reliable ambulances and the condition of the 2013 rig has continued to worsen over time. Suihkonen told the Timberjay this week that the company that produced the rig for Tower in 2013 no longer exists and that the vehicle’s electronics, including its heat and air conditioning, no longer function as they were designed. Electrical outlets in the rig routinely short out and drain the batteries that are supposed to power life-saving equipment. Cabinets in the back of the rig have been separating from the side walls and have had to be glued and screwed back into place several times.
The vehicle also lacks an auto-loading cot, which makes the job of patient transfer much easier on the ambulance service personnel. The new rig will include an auto-loading cot, noted Suihkonen.
The area townships, with the exception of Greenwood Township, have agreed to double their ambulance subsidy payments in the coming year in order to close the funding gap for the purchase of the new rig. Suihkonen said she will also be asking Fortune Bay to double its annual contribution next year to help pay for the new rig. Council member Kevin Norby said even with the additional contributions, the city will be short about $15,000-$20,000, which it will need to find somewhere else. Greenwood Township refused to pay any of its subsidy this year and has given no indication if it intends to start making payments in the future. The township is withholding payments out of a stated concern that the city hasn’t provided a business plan or been willing to sign a hold harmless provision that would protect the township from liability if one of their first responders commits an error on an ambulance scene. Unlike first responders in some area townships, some Greenwood first responders are not members of the Tower Ambulance, so the service does not oversee their training.
“We would have the full purchase price [of the ambulance] if Greenwood participated,” noted Suihkonen.
Despite questions about financing, Suihkonen said the cost of ambulances has been rising and that another price increase is scheduled with the new year. She said the cost of a new ambulance had already jumped $10,000 since they received an updated quote earlier this year.
Norby noted that the city wouldn’t be paying for the ambulance for at least a year, so it would have time to resolve the financing question. All together, the new vehicle is expected to cost approximately $250,000.
Suihkonen said the Ambulance Commission had considered both a 2024 Chevy and a Ford model and had opted in favor of purchasing the Ford. Council member Joe Morin questioned whether Suihkonen had discussed that choice with Mike Igo, who services the city’s ambulances. Suihkonen said she would consult with Igo prior to making the final order, but the council authorized the purchase unless he raised considerable objection to the purchase of the Ford.
In other action at Monday’s special meeting, the council met in a budget session to help set priorities for the 2023 budget, but made no decisions. The council is expected to approve next year’s budget and its 2023 levy at its regular meeting set for Monday, Dec. 12.