COOK- New empty-nesters usually find something to occupy their time when their kids finally fly the coop. Some travel. Some pick up new hobbies.As for Chris and Dawn Bogdan of Cook? They bought a … 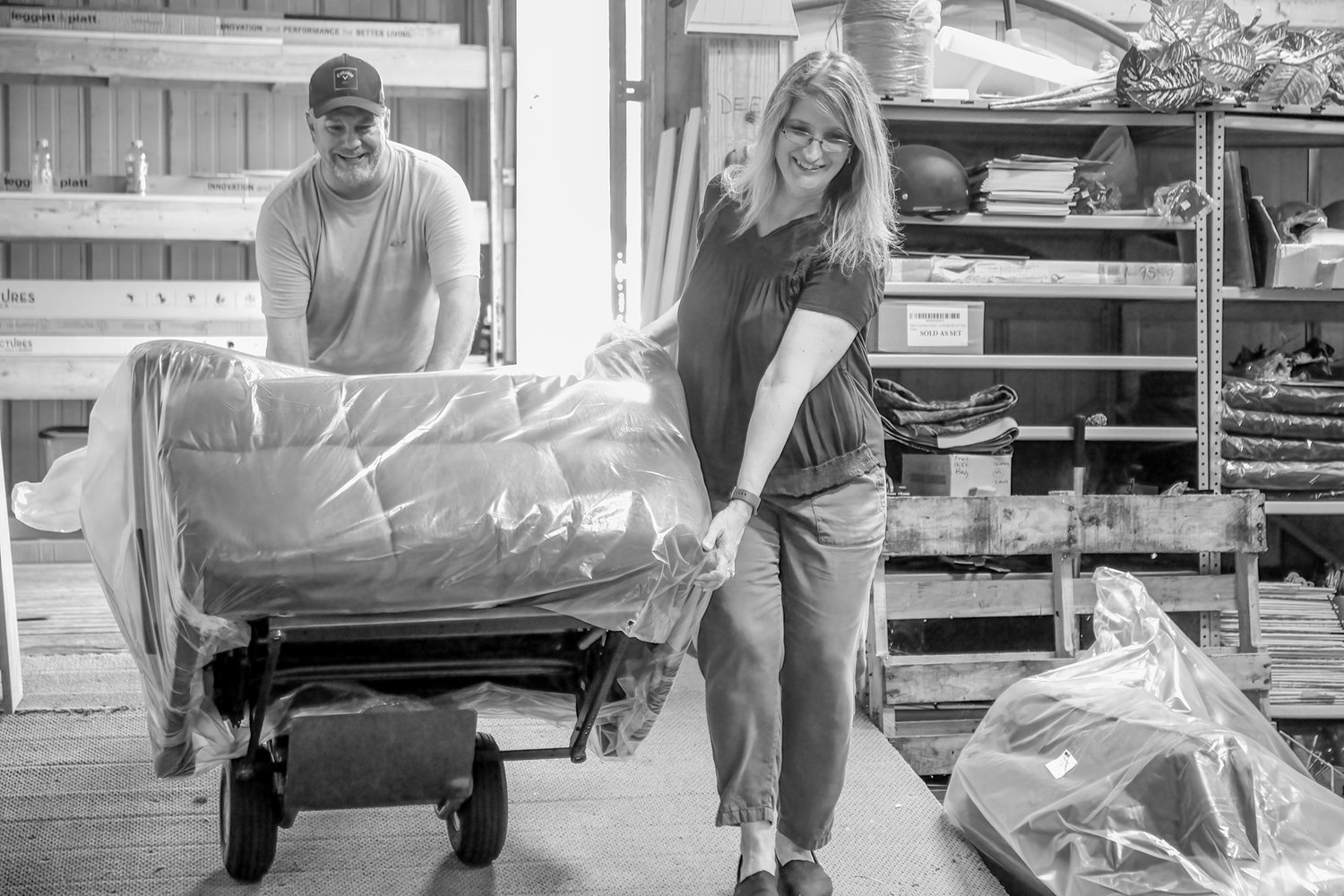 Having avoided most of the unloading because she was working with customers and an inquisitive member of the press, Dawn Bogdan takes a brief break on Monday to help her husband Chris wheel a chair into their newly-named Northern Comfort Company store in Cook.
D. Colburn
Posted Wednesday, June 22, 2022 7:11 pm

COOK- New empty-nesters usually find something to occupy their time when their kids finally fly the coop. Some travel. Some pick up new hobbies.
As for Chris and Dawn Bogdan of Cook? They bought a furniture store.
“It’ll be our new baby and we’re really excited,” Dawn said Monday.
The Bogdans’ only child, recent North Woods graduate Haley, is headed to Viterbo University in La Crosse, Wis. this fall, and Dawn said the timing was just right for the couple to buy the well-established Furniture Plus Gift and Video store in Cook from now former owners Mike and Dianne Suomela.
And like any couple with a new baby, the Bogdans have picked out a new name for their new “baby”: Northern Comfort Company.
“Chris and I each made a list of names that we thought might work individually, and for some reason Northern Comfort Company was on both of our lists,” Dawn chuckled. “We both just laughed and said, ‘That’s it. We’re done. That’s the name we’re using.’ Because, I mean, how did that even happen?”
They have a new logo, too, a sasquatch sitting in a chair looking quite content with its selection.
“It’s kind of ironic, because they had a statue out there for a long time that they sold of a sasquatch, but that had nothing to do with it,” Dawn said. “It’s just kind of a fun, whimsical Northwoods thing, and we’re fun people and pretty laid back.”
Chris said they didn’t have to think too hard about shifting gears to go into the furniture business.
“We’ve been working many years for other people, and we used to work for ourselves and wanted to get back into that,” Chris said. “This was just a great business. Mike did a great job here all those years and you hate to see it leave. People in town can use a store like this. So we figured what the heck, let’s give it a try.”
It’s a partnership that’s surely destined to work given that Chris and Dawn have been together since they were 16-year-old high schoolers living in Naperville, Ill., a busy corporation-oriented suburb of Chicago.
“We’ve been together a long time. We dated for ten years and then got married, and it’s 24 years coming up,” Dawn said.
Dawn owned and operated an insurance agency in Naperville and Chris was an auto body/paint shop manager and had vacationed for four summers in a row at Vermilion Dam Lodge. When Haley came around in 2003, the couple found their priorities were changing.
“We always wanted to move up north because we love this area, so we sold everything and we bought a house out near Vermilion,” Dawn said.
The Bogdan family eventually became part of the Timbuktu family, with Dawn working for Timbuktu Marina as manager for the past 13 years and Chris notching a six-year run with Timbuktu Marine Sales and Service as service manager. Leaving Timbuktu was perhaps the most difficult part about buying the furniture store.
“They’re very supportive of us,” Dawn said. “We’re starting a new venture and they’re very excited. They’re like a second family to us.”
Monday was akin to Christmas for the Bogdans due to a delivery truck showing up at the back door with 50 new pieces of furniture for the showroom floor, and aside from not actually giving them the furniture, Mike Suomela was the next best thing to Santa Claus. Knowing the extraordinary lead times for orders from his primary suppliers, Suomela placed orders for this shipment last fall.
“Mike reserved all that production in the fall not knowing what he was going to be doing but knowing that he would need to have that product in the store to be able to sell for the rest of the year and into next,” Dawn said. “We’re glad to have it because people get very excited when they come in and we can deliver in a couple of days. This is actually the largest amount of furniture there’s ever been at one time in this store. It’s a lot to take on but we’re excited about it.”
And the Bogdans haven’t waited to start focusing on next year.
“We have production reserved for 2023 already for five months,” Chris said. “We could take 50 custom orders and still have furniture for people by the fall of next year. People who don’t inventory or production reserved like Mike did for us, they’ll be waiting until 2024.”
And Mike was there on Monday helping unload. A few of those pieces on the truck were ones he’d already sold, and true to form, he was there to see the sales through to the end. It’s a model of service the Bogdans embrace as well.
“We’re very big into customer service,” Dawn said, “and it’ll be nice because he and I can run the business on our own, other than some delivery help.”
Perhaps it needn’t be said, but the Bogdans are planning on sticking with the tried-and-true mix of suppliers that cater to the outdoors, north woods styles that regulars and potential new customers seem to want, although over time they’ll add their own flair to the business.
Folks will soon see new stock in the gift shop, too, as that will remain an integral part of the business. And whatever decisions lie ahead, there’s little doubt that the Bogdans will make them together.
“We know each other pretty well,” a grinning Chris said. “We get along really well and we make a good team. Whatever my weaknesses are, she’s stronger, and I’ve got my spots where I can do a little bit more than she does, so it works out perfect.”
The store is located at 123 2nd Ave. SE in Cook. The phone number to call for more information is 218-666-9891, or check for the Northern Comfort Company page on Facebook.