REGIONAL— The story for deer hunters in the North Country didn’t improve during the final week of the regular firearms deer season, which ended Sunday, Nov. 20. Deer registrations were … 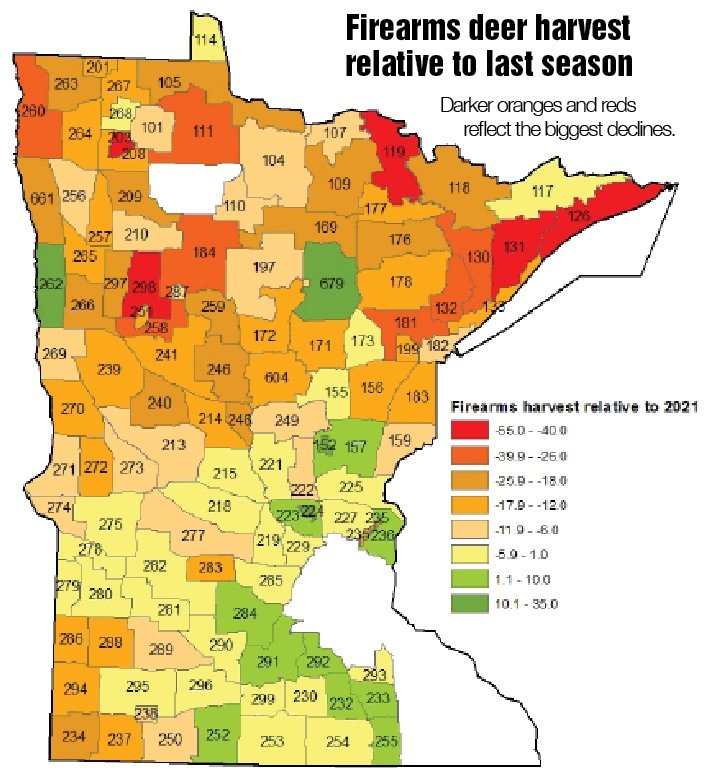 REGIONAL— The story for deer hunters in the North Country didn’t improve during the final week of the regular firearms deer season, which ended Sunday, Nov. 20. Deer registrations were down virtually all across northern Minnesota, and nowhere more dramatically than in St. Louis and Lake counties, where some permit areas saw hunter success fall by as much as 40 percent over last year.
Hunters in permit area 119, located in far northern St. Louis County, registered just 211 deer for the season, which was well under half the 457 deer hunters registered there just four years ago. The falloff in hunter success was even more stunning in permit area 130, which runs from Tower southeast nearly to the North Shore. There, hunters registered just 92 deer on the season. As recently as 2018, hunters had registered 420 deer in that permit area, although that figure was buoyed somewhat by a larger number of antlerless permits issued to hunters that year.
Severe or extended winters in three of the past four years clearly made their mark on the region’s deer herd, although many hunters also pointed to the region’s sizable wolf population as another major factor behind their lack of success. Jessica Holmes, the DNR’s Tower Area Wildlife Manager acknowledged she’s heard more complaints about wolves from hunters this year, although she notes that the two species have evolved together for a long time. “Wolves are an easy target. There are many factors at play here impacting the deer population,” she added. While many factors determine deer numbers, Holmes said wolves can contribute to local declines in combination with other factors.
While the size of the deer harvest can vary from year-to-year in individual permit areas as a result of changes in the number of antlerless permits issued by the DNR, that does not appear to have been a factor in the decline this year, at least in the Tower work area. “There was essentially no change in antlerless permits so we cannot attribute the harvest decline to that,” said Holmes.
While wolf predation is undoubtedly a significant factor, the areas with the lowest harvest numbers track well with the highest winter severity index readings from last winter. Pockets throughout St. Louis, and especially southern Lake and Cook counties, which saw significant lake effect snow last winter, coincide almost perfectly with the permit areas showing the biggest declines in deer registrations.
According to Holmes, tough winter conditions, combined with fragmented winter cover, can increase deer mortality, with or without wolves. And Holmes notes that a portion of the deer that wolves kill would likely not have survived anyway during severe winters. According to Holmes, adequate winter cover not only protects deer from cold winds, but allows them to better escape wolves when they are in the area. Under winter cover, which typically includes dense mature pine, spruce, or balsam fir, snow depths are usually lighter, allowing deer to expend less energy to move around, whether to feed or escape predators.
DNR wildlife officials had expected a disappointing season, as the area deer herd has struggled to recover from high winter mortality in recent years, but none had predicted the kind of dramatic falloff in hunter success experienced this season in northeastern Minnesota.
While hunters struggled to find deer in northern Minnesota, they found more success in the southern half of the state where many permit areas saw an increase in registrations while most others saw only negligible declines over last year. That helped to limit the harvest decline statewide to a more modest nine percent. In total, hunters had registered a total of 152,032 deer statewide as of Nov. 23, with only the muzzleloader and some limited special hunts remaining. That is likely to leave the final statewide harvest well below the DNR’s stated annual goal of 200,000 deer, a target the DNR set in 2018 and hasn’t met since.