Ely pays homage to its veterans

ELY – Calvin Herrala, age 98, this community’s oldest veteran, was honored earlier this month with a Quilt of Valor for his service in World War II.Herrala and several other area military …

Ely pays homage to its veterans 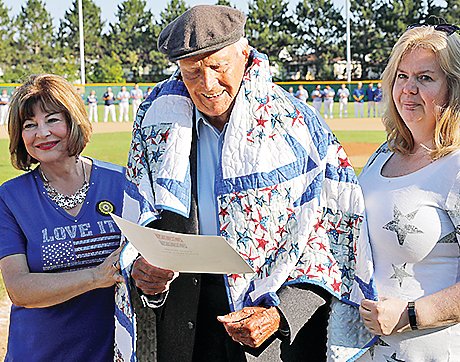 ELY – Calvin Herrala, age 98, this community’s oldest veteran, was honored earlier this month with a Quilt of Valor for his service in World War II.
Herrala and several other area military veterans were recognized by the Ely Baseball Association during opening ceremonies for the Minnesota Junior Legion Baseball Division II State Tournament at Veterans Memorial Field.
Herrala graduated from Ely High School in 1942 and entered the Army Air Corps (predecessor to the U.S. Air Force) a year later. He served in the Pacific Theater during the Second World War, maintaining radar units on Iwo Jima. Following his military service, Harrala attended Harvard University where he studied physics, and worked for Honeywell until 1989. He moved back to Ely in 2005 following the death of his wife.
The Ely Honor Guard and several Ely veterans opened the Legion baseball tournament on Aug. 4 with a special ceremony that included the eight teams in the competition. Herrala was presented with a Quilt of Valor from Michelle Sherwood, of the Quilts of Valor Foundation, and Joan Novosel, president of American Legion Auxiliary Post 248 of Ely.
The Quilts of Valor Foundation was founded in 2003 by Catherine Roberts. Her son Nat was deployed in Iraq at the time. According to Roberts, she had a dream that led to forming the foundation.
“The dream was as vivid as real life. I saw a young man sitting on the side of his bed in the middle of the night, hunched over,” she said. “The permeating feeling was one of utter despair. I could see his war demons clustered around, dragging him down into an emotional gutter. Then, as if viewing a movie, I saw him in the next scene wrapped in a quilt. His whole demeanor changed from one of despair to one of hope and well-being. The quilt had made this dramatic change.”
A Quilt of Valor is a handmade quilt that is machine or hand quilted, and awarded to a military service member or veteran who has been touched by war.  The Quilt says unequivocally, “Thank you for your service and sacrifice in serving our nation.” There have been 300,000 such quilts presented to military members.