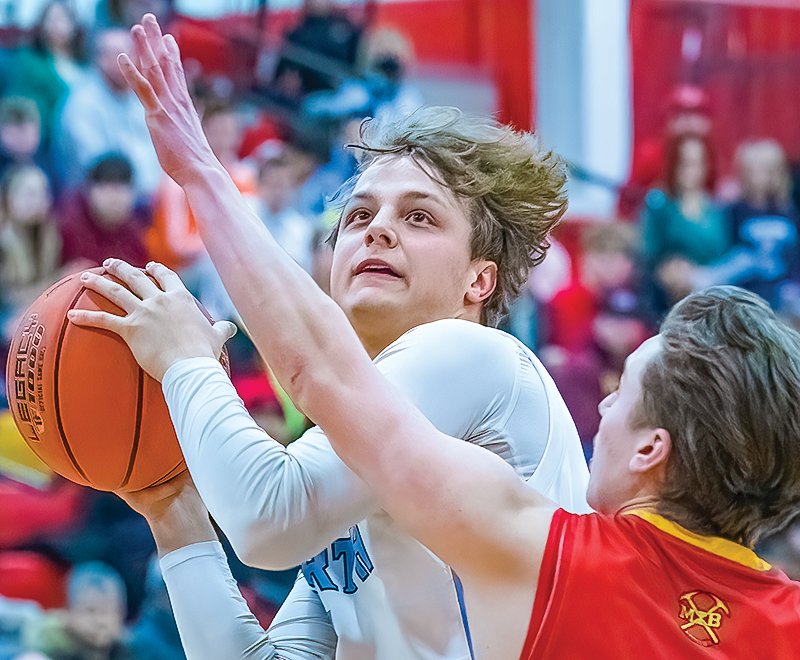 FIELD TWP- The North Woods boys basketball team hit a rough patch this past week, dropping consecutive games to Mt. Iron-Buhl, Red Lake, and Fond du Lac.
Friday the 13th was indeed an unlucky night for the Grizzlies, who squared off against Mt. Iron-Buhl on a night when the Rangers were hosting their Hall of Fame inductions.
MIB’s senior guard Asher Zubich, a shoe-in for MIB’s Hall of Fame as the school’s all-time career scoring leader with over 3,000 points, wasn’t about to disappoint the packed gym, slicing and dicing the Grizzlies for 53 points in the Rangers’ easy 98-62 win. Zubich was 7-of-9 from three-point land, 19-of-26 overall, and hit eight of nine free throws.
MIB broke out of the block fast in this one, building a 17-7 lead in the first three minutes. The pace slowed momentarily, then MIB was off to the races again, extending their lead to 37-22 with six minutes left in the half. Jared Chiabotti and Louie Panichi popped in deuces and Jonah Burnett canned a trey down the stretch, but the Grizzlies headed into the half trailing 51-30. But the Grizzlies found no answers during the break, as MIB continued to dominate in the second half for the 36-point win.
Burnett led North Woods scorers with 18 hard-earned points, followed by Brenden Chiabotti with 14 and Panichi with 10.
The Grizzlies had little time to rest as they were back on their home floor Saturday afternoon to take on Red Lake.
This was a hotly contested affair between evenly matched teams, with Red Lake edging ahead 16-8 in the early going. A basket by Eli Smith knotted the score at 22-22, and the Grizzlies took the lead on a breakaway dunk by Burnett, 26-24. Red Lake answered with a pair of threes, and with five minutes left in the half held a 39-32 edge. Burnett ignited a small rally in the final minute of the half with a tip-in off a missed free throw and a long three at the buzzer to pull North Woods within 50-48 going into the break.
North Woods stayed close during the early part of the second half and took the lead 69-68 on consecutive treys from Ben Kruse and Jared Chiabotti. The lead flipped back and forth as the teams fought to a 90-90 tie with just over four minutes to play. Red Lake went up by four, but Kaden Ratai hit a pair of free throws to make the score 94-92 in favor of Red lake. But the Grizzlies remained stuck on 92 as the Warriors stretched the lead to 101-92 with under a minute to play, and Red Lake iced the game from the line for a 105-97 victory.
North Woods had four players in double figures, with Jared Chiabotti leading the way with a game high 33 points. Burnett scored 19, Brenden Chiabotti tallied 14, and Panichi added 13.
The Grizzlies hosted Fond du Lac on Tuesday with an eye toward getting back on the winning track, but the Ogichidaag gave notice right from the outset that they would give North Woods all they could handle and more. After Panichi got the Grizzlies on the board to start the game, Fond du Lac pushed out to a 22-11 lead after nine minutes of play in a game that was one of the most physical the Grizzlies have played all season. But by the 4:24 mark the Grizzlies had clawed their way back to within one, 32-31, in a run that included a pair of treys from Burnett and one from Panichi. The Ogichidaag stretched the lead back out to seven before a Jared Chiabotti triple cut the lead to 42-38 at the half.
North Woods took its second lead of the game, 51-50, on a fast break bucket by Burnett with three minutes elapsed in the second half. For the next several minutes the teams traded blows, with Fond du Lac claiming a 64-60 edge.
The Ogichidaag had been whistled for multiple technical fouls during the game, but with 9:30 remaining it was the Grizzlies’ turn to get slapped. The ensuing two free throws by Fond du Lac and a flurry of baskets suddenly gave them a 73-62 cushion and a lead they would not relinquish the rest of the way. Every move the Grizzlies made Fond du Lac countered, and North Woods tossed up mostly blanks from three-point range as they tried to come back. Fond du Lac hit the century mark from the free throw line in the game’s closing minute, handing the Grizzlies their third consecutive loss, 100-86.
The Grizzlies were scheduled to play on the road at Northome on Friday, followed by a Tuesday trip to Cherry.