FIELD TWP- The North Woods Grizzlies are still looking for their first win of the season after a soggy 26-6 loss to Deer River on their home turf last Friday.The Warriors drew first blood on their … 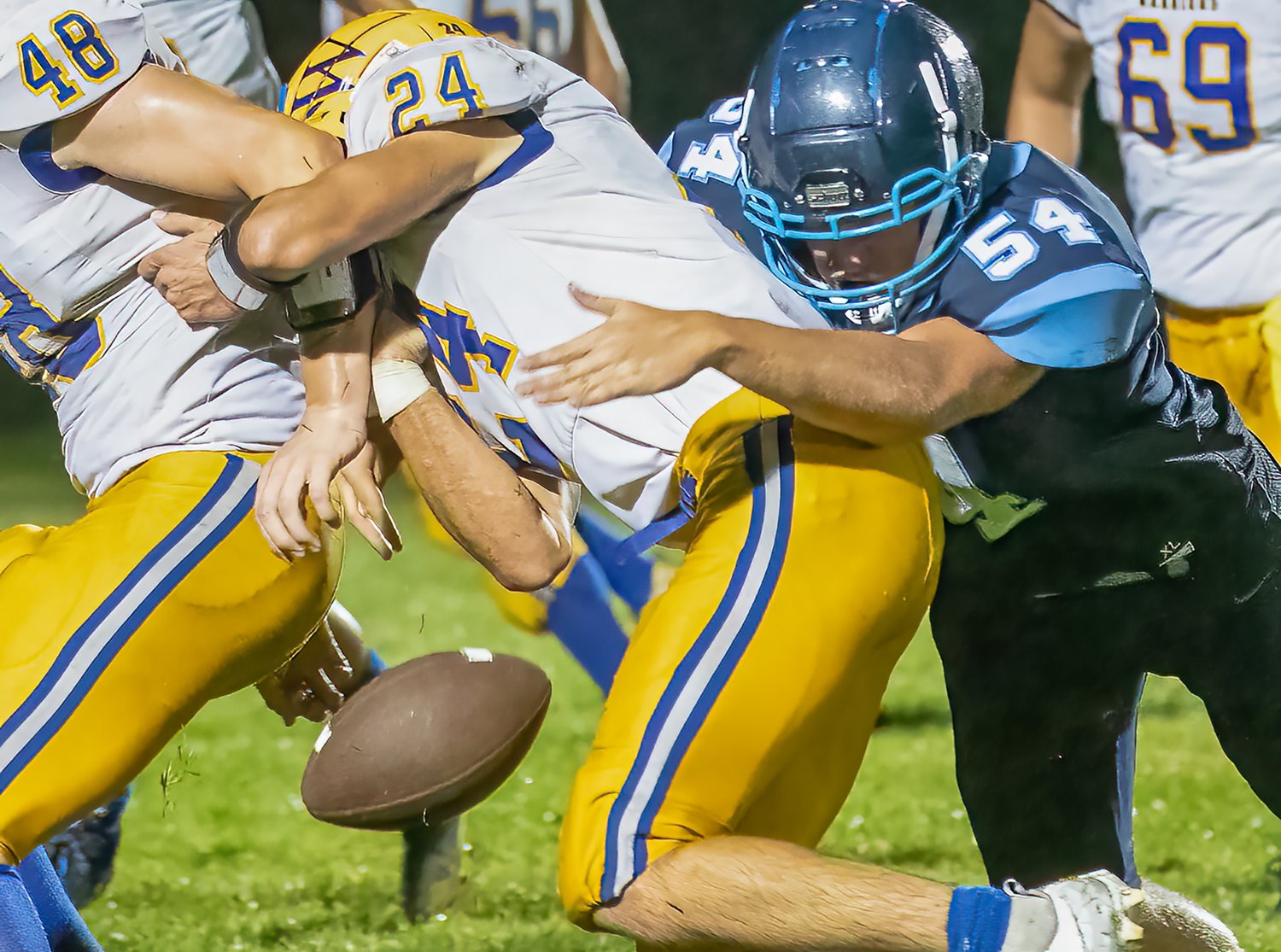 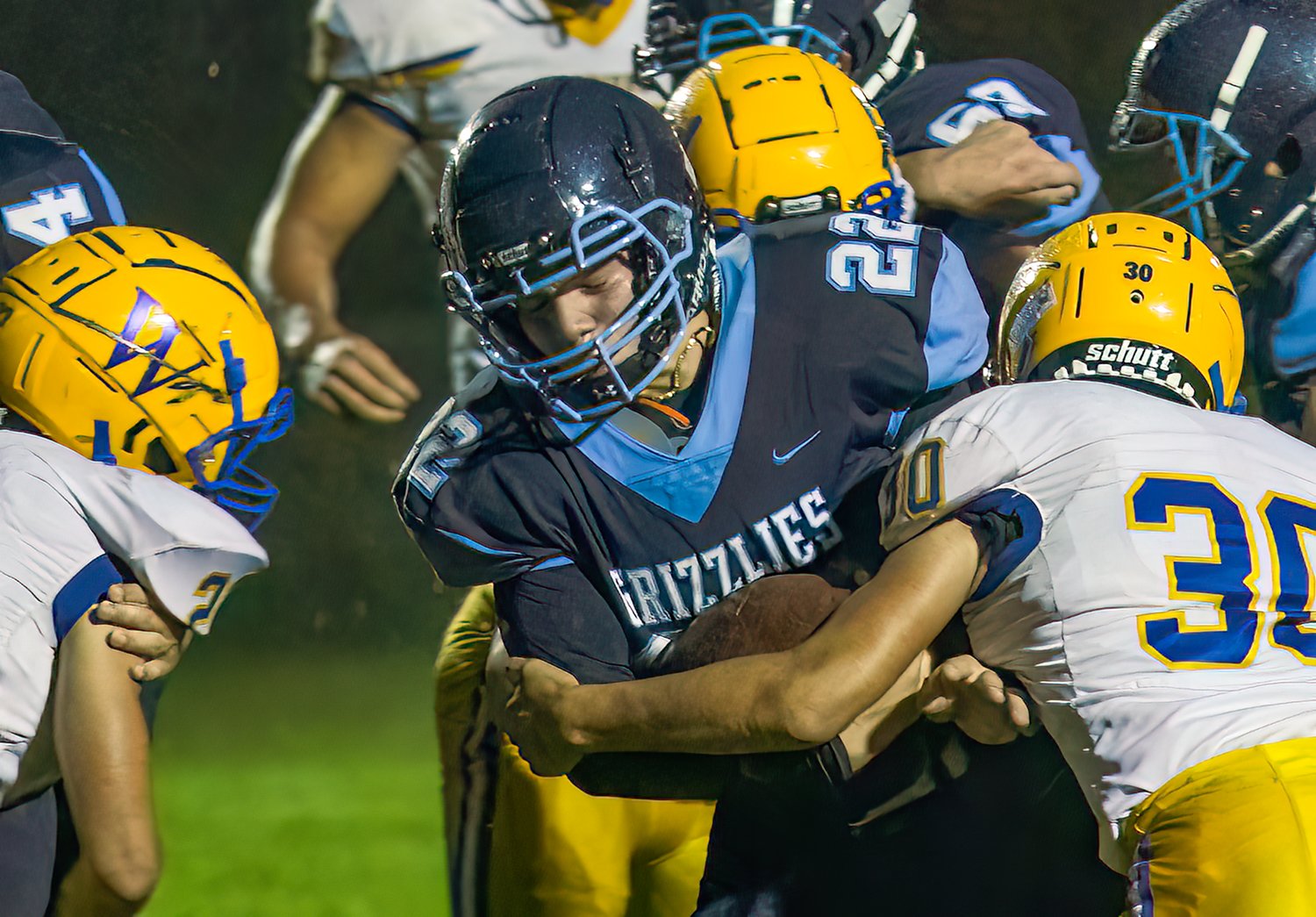 FIELD TWP- The North Woods Grizzlies are still looking for their first win of the season after a soggy 26-6 loss to Deer River on their home turf last Friday.
The Warriors drew first blood on their opening drive of the game. After a 38-yard pass completion to the North Woods 15, Deer River punched the ball in on a five-yard score at the 9:13 mark to take a 6-0 lead.
Playing from behind for a third consecutive game, North Woods started with good field position after the ensuing kick at their own 35. After Jared Chiabotti ran for eight yards, Nick Abramson got the Grizzlies’ first big gainer with a run to the Deer River 32. North Woods got a big fourth-down conversion from Chiabotti and new life at the Warriors 19, but the Grizzlies’ drive stalled and Deer River took over on downs at the 24.
Deer River smartly moved the ball downfield into the North Woods red zone, and on third-and-nine at the Grizzlies’ 18 quarterback Sam Rahier found Ethan Williams wide open in the end zone for a touchdon. The two-point conversion put Deer River up 14-0 as the first quarter came to a close.
North Woods had to punt the ball away on its next possession, but the Grizzlies’ defense responded with a three-and-out and handed the ball back to the offense at the North Woods 39 after the punt with 6:39 remaining before the half.
Chiabotti immediately broke free on a run to the Deer River 36. North Woods was looking at third-and-10 from the Deer River 11 when Head Coach Joel Anderson called a time-out with 2:03 remaining. Anderson called a little flip pass from Lane Kneen to Chiabotti that worked to perfection, with the Grizzlies’ back turning up field and racing untouched into the end zone.
With the lead down to 14-6, Deer River had one last chance to score in the half with a fourth-and-nine at the North Woods 27, but Olin Nelson led a swarm of Grizzlies defenders that sacked Rahier and ended the threat.
The Grizzlies suffered a blow to their comeback hopes when Chiabotti went out of the game with an injury in the third quarter and didn’t return. The home fans had something to cheer when Kneen completed his longest pass of the season, a perfect 41-yard strike down the middle to Jonah Burnett, but the Grizzlies still couldn’t find the endzone in the second half.
Deer River running back Tygh Gullickson picked up a 29-yard score in the third quarter and added a four-yard touchdown run in the fourth to account for the 26-6 final score, but Anderson was pleased overall with the team’s defensive effort, including a fumble-causing hit by defensive lineman Noah Westman that ended a Deer River threat deep in Grizzlies’ territory.
“Deer River is big and powerful and they’re going to put three or four scores on the board,” Anderson said. “They have enough weapons to do that. We came into the season where we were going to be fairly green, and our guys are making nice adjustments and getting better and more comfortable every play, every game. We’re getting a much better rotation and keeping guys fresh. I thought our defensive line played fantastic, our linebackers stepped up well, and our corners made good reads after the first quarter. Deer River didn’t seem all that comfortable with what we were able to do out there.”
Anderson acknowledged that the Grizzlies had a tougher time moving the ball after Chiabotti went out, but again saw some signs of growth with the offense.
“We’ve just got to score more points,” he said.
Despite his abbreviated playing time Chiabotti led the Grizzlies in rushing with 68 yards in 14 attempts, a 7.4 yards per carry average. Abramson had a solid game with 52 yards on nine carries. Kneen was six-for-14 passing with 56 yards, with the bulk of those coming on Burnett’s long reception and Chiabotti’s scoring catch.
The Grizzlies will need every point they can get in Friday’s road contest at Barnum, which has racked up 95 points in its last two games against East Central and Braham. The Grizzlies will be back home on Sept. 30 to take on Braham, with an early start time of 3:15 p.m.