When a bobcat becomes a regular visitor

There was a critter afoot. I pointed that out to Jodi several days before Christmas. Someone had dumped the butchered remains of a deer on our property back in November and I had dragged it all to a …

When a bobcat becomes a regular visitor 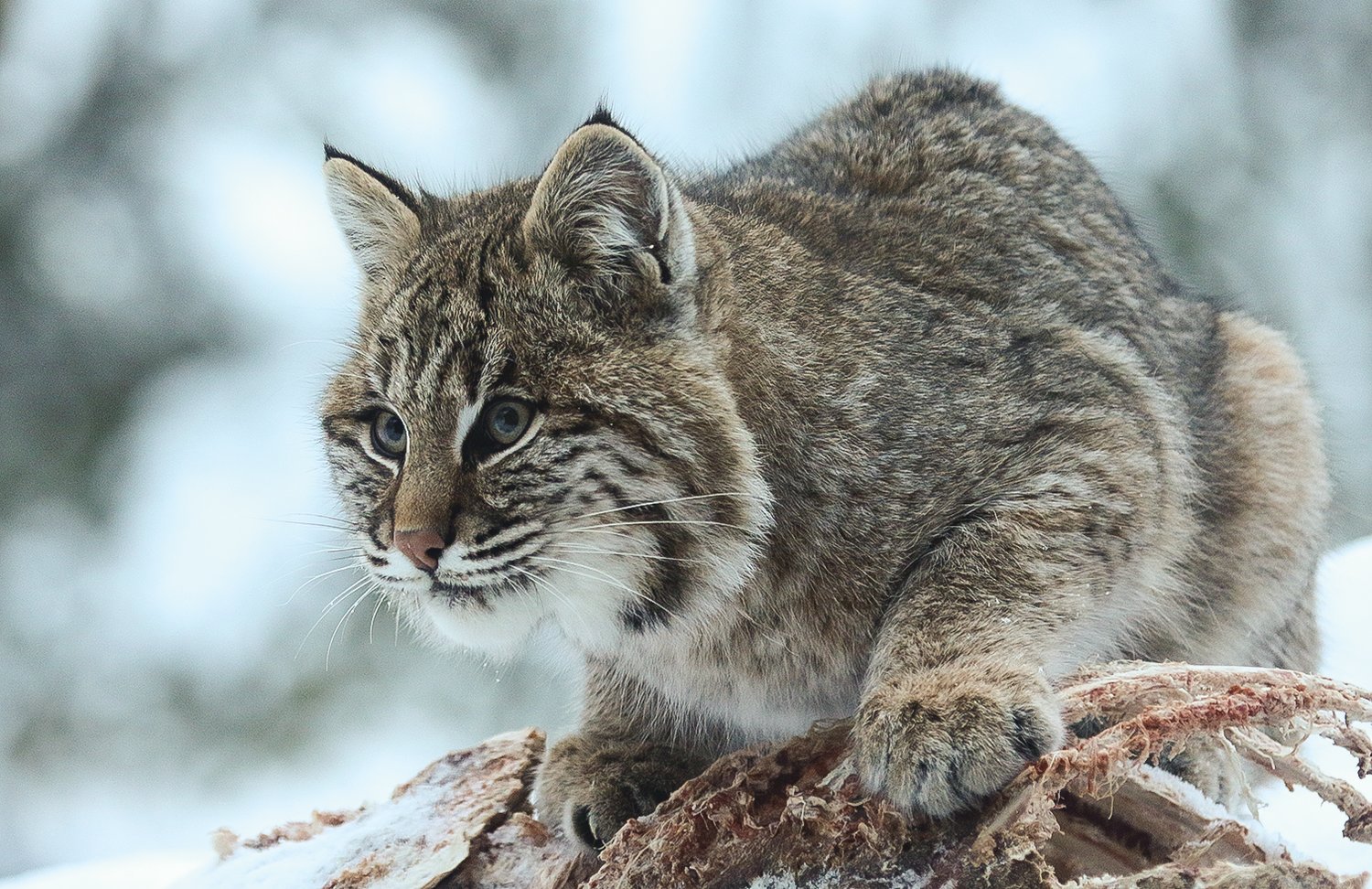 The bobcat who came for dinner stares intently while taking a break from feeding.
Max or Marshall Helmberger 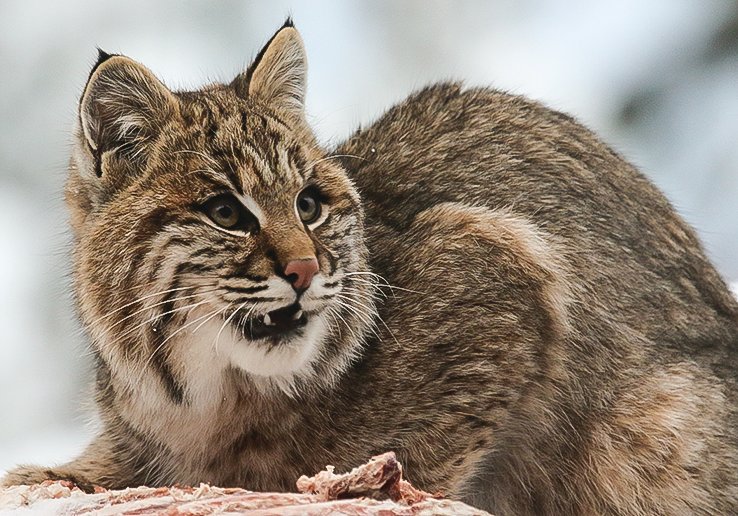 The cat looks up exposing its lower fangs.
Max or Marshall Helmberger 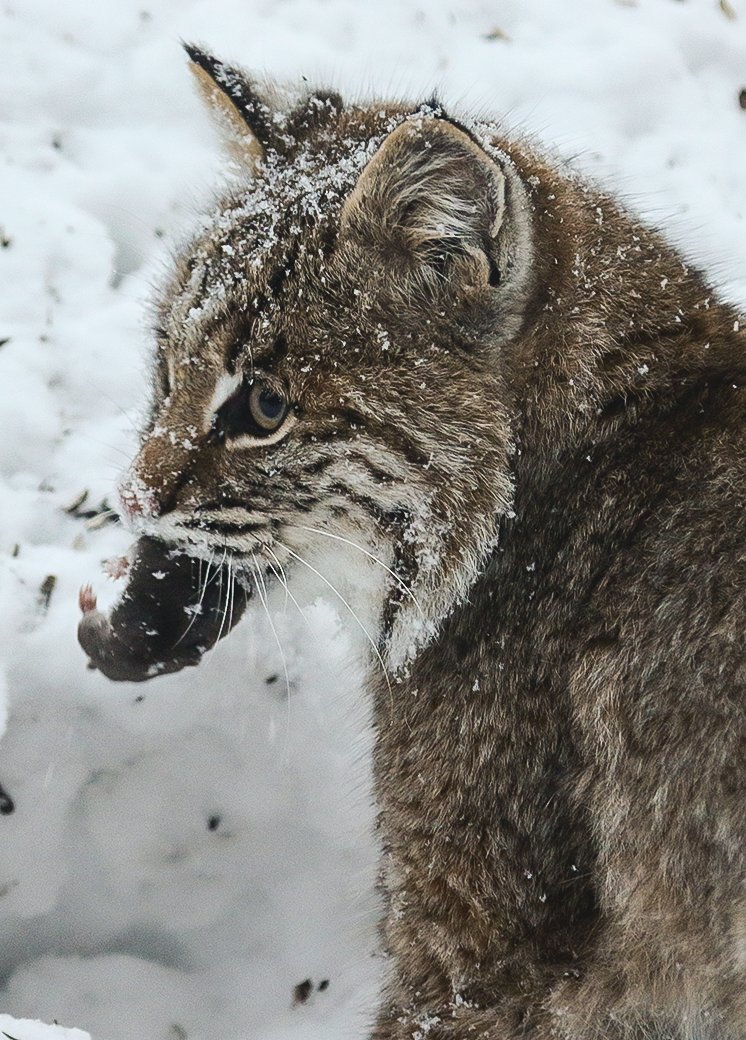 The bobcat comes up with a short-tailed shrew after diving head first in the snow.
Max or Marshall Helmberger 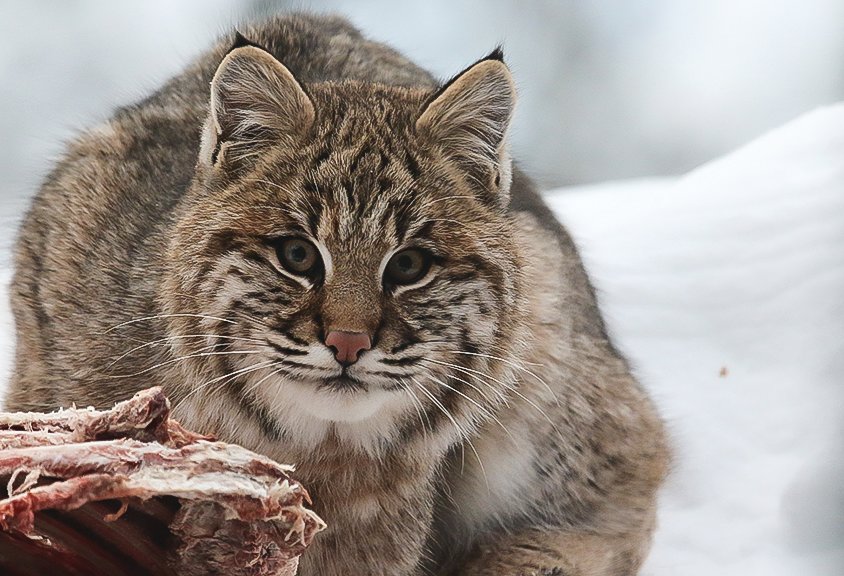 The bobcat stares at the photographer, about 15 feet away inside the house.
Max or Marshall Helmberger
Previous Next
Posted Wednesday, January 11, 2023 6:10 pm

There was a critter afoot. I pointed that out to Jodi several days before Christmas. Someone had dumped the butchered remains of a deer on our property back in November and I had dragged it all to a big rock that sits just outside our west picture window. Something had dragged it off the rock and ate a good chunk of the remaining meat around the ribs.
I tossed the remains back up on the rock and chalked it up to a fisher, since they’d done that kind of thing before. But the next day, shortly before dusk, the critter showed up again.
It was a bobcat, the first one I’d ever seen in the wild. I’ve suspected we’ve had bobcats near the house before, since I’d seen what I was pretty sure were their tracks in the past. But this was the first time I’d ever seen one of our more secretive neighbors in the flesh.
I was in the house, sitting on the couch that faces the window, and I froze out of concern for spooking the animal. I assumed immediately that a bobcat would be wary, unlike their cousins— the Canada lynx— which tend to be pretty lackadaisical around humans.
It turns out I needn’t have worried. The cat seemed unconcerned by my movements that first day, nor the movements of others over the next week or so, when he (or she?) became a regular visitor to the deer carcass and other meat scraps we tossed up on the rock as a kind of offering. Several others got to see the cat although it failed to make its cameo when we invited friends for an early dinner and cat-viewing a few days after Christmas.
But for those of us who saw it, it was definitely a close encounter. The “rock,” a glacial erratic about the size of a big round pickup truck, sits less than ten feet from the window and it’s been our perfect viewing platform for birds and beasts of all kinds over the years. This bobcat was just the latest in a long line of performers on our unofficial outdoor stage.
It was, perhaps, about time. Bobcats have been on the ascendancy in northern Minnesota in recent years. DNR biologists currently estimate their population in the state at an average of about 7,000, although the numbers vary considerably from fall to spring. As recently as 25 years ago, the DNR pegged the bobcat population in the state at about 2,000. Most bobcats are found in central to north-central Minnesota, although they are found (albeit in lower numbers) here in northeastern Minnesota as well. DNR biologists think there are a couple factors contributing to higher bobcat numbers. Climate change, particularly warming that occurred between 2000-2010, coincided with a spike in bobcat numbers and appeared to allow them to gain a better foothold in more northerly parts of the state, where they used to be relatively rare. Unlike their more northerly cousin, the bobcat isn’t adapted for the deep snow and intense cold that used to characterize a far northern Minnesota winter.
The spread of wild turkeys into the region, another apparent impact of climate change, has likely played a role as well in the rising bobcat numbers. It doesn’t take many turkeys to keep a bobcat fed through the winter.
Of course, turkeys probably wouldn’t survive the winters here without help from humans. The amount of corn now routinely distributed across the landscape mostly to aid deer, has altered the ecological balance here. Corn is a rich source of energy and it has made it possible for birds and mammals that would normally succumb to a North Country winter to survive here where they couldn’t in the past. Those critters, in turn, make it possible for predators that rely on them to survive. That has implications, many of which we can’t even predict right now, for other species that are otherwise better adapted to the hardships of a northeastern Minnesota winter.
The widespread feeding of corn, combined with climate change, is altering our region. For now, it appears that bobcats are among those species benefitting from the changes.